Goldman Sachs downgraded the shares to "Sell" while Credit Suisse lowered their price target to $65 while maintaining a "Neutral" rating.

On the surface, the issue for this growth-and-income name is the current lack of growth with a current lack of income. Exxon Mobil continues to pay its dividend, but with large capital expenditures, it's likely going to have to borrow to pay.

Taking on debt to pay dividends is a risky move. This comes on top of frozen buybacks in the stock.

I find both moves slightly ironic given how management claims the excess supply is a short-term impact to business, so investing in the trough of the cycle works out well in the long run. If that's the case, then why borrow to pay a dividend?

Either borrow to invest more at the trough of the cycle or borrow to buy back shares since valuation should be near a low point. Borrowing to pay dividends simply pulls away from future cash flow with no business benefit.

And its free cash flow that sits at the heart of the Goldman Sachs downgrade. The analyst worries that the return on capital employed will only hit around 8% by 2025 rather than the 15% number initially set back in 2018. That's a huge statement about the risk of execution and capture rates.

The company did acknowledge weakness in chemicals and refining. Downstream business was lackluster as low oil prices weighed on results. Despite reporting earnings of $1.33 per share for the fourth quarter against $0.45, that number would have been $0.41 if divestitures are backed out. Of the $3.9 billion in divestitures, $3.7 billion came from the divestment of Norway upstream to Var Energi AS.

For the fourth quarter, the $11 billion in cash flow outpaced $8.46 billion in capital and exploration expenditures, but for the full year, the two numbers were only $1.3 billion apart. Back out divestitures, and the net is red. That makes paying $15 billion in dividends for the year a bit tougher to swallow, in my view.

If we are near a short-term bottom in the cycle, then it would stand to reason either investing in the business or the stock would be more logical than focusing on the dividend. That is a short-term reaction to placating investors. 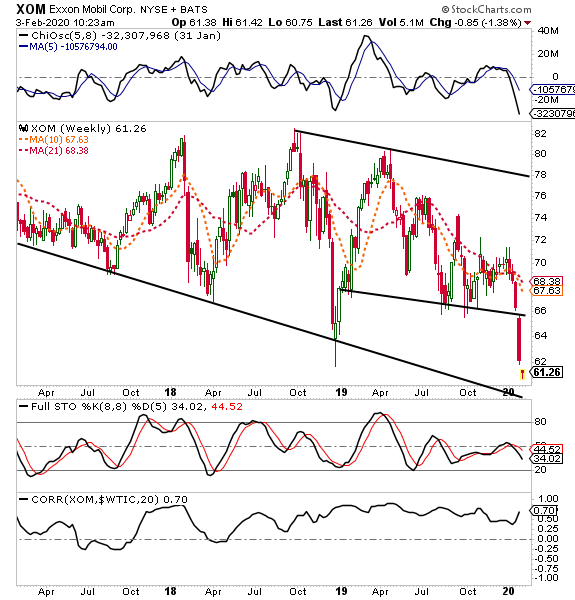 The shares are overextended on the downside. The stock has given up one-fourth of its value since October 2018, and hitting lows not seen in quite some time.

While the correlation with light crude is moderate, it's not exactly consistent. It seems to pop when the stock is near short-term lows.

Bulls will want to watch that $60 level. Failure to hold puts us on a path to $56 to $57. I do think we'd see worse action Monday if the markets weren't up over 1%. Exxon Mobil lives in enough broader-based ETFs to get a rising tide lifts all boats benefits Monday.

I'd let the downgrade sink in for a day or two. If Monday morning's low isn't violated, then the setup exists for an oversold bounce back to the $65 area.

However, buying for the longer term means betting big that management is timing the bottom of the cycle correctly. I'm not ready to make that bet yet.

Get an email alert each time I write an article for Real Money. Click the "+Follow" next to my byline to this article.
TAGS: Dividends | Earnings | Investing | Markets | Oil | Stocks | Technical Analysis | Trading | Stock of the Day