As longtime readers know, I have a tendency to harp when an indicator is saying something and the rest of the market is ignoring it. Lately, I have been harping about sentiment, but I have not been harping about negative divergences.

The reason I have not been harping about them is because we really haven't had any. For example, Thursday's rally saw an increase in the number of stocks making new highs, but it fell short of the prior peak reading a few weeks ago. Since both the New York Stock Exchange and Nasdaq had more than 200 new highs, the 10-day moving average lines of this metric have turned up. The new lows continue to be non-existent. Therefore, I would pencil in a possible negative divergence here, and I would keep the eraser close by.

Then there is breadth. Breadth on Thursday's rally was nothing to write home about. Tuesday's rally of nine points for the S&P saw net breadth at positive 850, which continues to make new highs, so there is no divergence to speak of. Thursday's rally of 27 points for the S&P, however, saw net breadth at positive 660. Awful, right? But it's not a divergence, because the cumulative advance/decline line keeps making higher highs.

Also the positive breadth, even though it has started lagging, has not yet had an effect on the McClellan Summation Index. It needs a net differential of negative 900 advancers minus decliners to halt the rise, which is a pretty poor cushion considering how good breadth has been. A week ago it needed negative 2,000. But it is still rising. So, there is no divergence here. Not yet.

There is a divergence using the Overbought/Oversold Oscillator, since you can see it has been trending down from a lower high for about two weeks now, which happens to be when the Russell 2000 made its high so far. So here is a negative divergence.

The real issue with this market is not the divergences, it is sentiment. The CNN Fear and Greed Index is now at 97. I suppose it can get to 100, but at the December low last year it was at four. That's to show you the extreme.

The various put/call ratios and their moving average lines have been discussed, so I won't harp on those, but we can take a look at the Investor's Intelligence bulls, which took last week off, but this week chimed in at 58.9%. So they are still not over 60%. I hope you can see why I fuss over 60%, because it is one tough hurdle to get over, but they are now the highest, since the 58% reading in July. 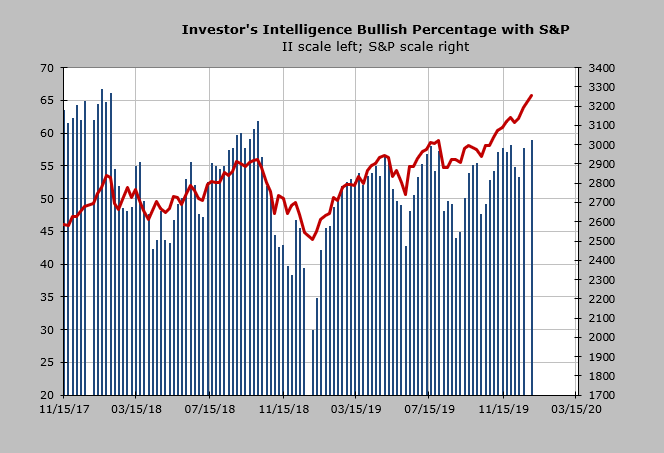 The American Association of Individual Investors' weekly survey showed a minor tick down in bulls, but the four-week moving average of bears is now hovering just over 22%. You can see on the chart that this tends to be a spot that shows far too much complacency in the market. At best the market went sideways after achieving this level and at worst, it corrected to the downside.

Finally, the Daily Sentiment Index (DSI) for Nasdaq is back at 90. Each time it has tagged 90 in the last few months, we've seen a pullback. Even for just a day or so. The Volatility Index (VIX.X) now at single digits as it is nine.

To be bearish, I need to see divergences and indicators rolling over. But that doesn't mean I have to like the market up here with sentiment as it is. If those breadth readings weaken, we will get some negative divergences, so we need to continue to focus on that.

The charts of TMO are positive.

But rates to stay -- now let's see what happens after Fed's comments.

Jim Cramer: 2 Stocks That Are Yours for the Asking

I am saying point blank that neither Starbucks nor Advanced Micro Devices is priced for the future. But they will adjust.

Line Up This Trade With Align Technology

Here's how to play ALGN, which is expected to report later Wednesday, three weeks from its Feb. 21 expiration.

I'd Be Hesitant Chasing General Electric Stock at These Levels

The company needs to continue to reduce debt and strengthen its balance sheet.