We thought, coming in, that Monday trade might be cautious ahead of the US mid-term elections. I don't know how cautious the day's outcomes were, but trading volumes certainly took a breather. It would not surprise to see more of that on Tuesday, until certain sectors start moving around perhaps in the afternoon as rumors start spreading that one side or the other is doing better than expected in today's polling.

As for that Monday session, the overall mood was upbeat, though Apple (AAPL) led much of the information technology sector lower. Within that group, cloud and software names were largely spared. Not so much for hardware manufacturers or those chip makers that supply the smartphone industry.

Market pricing for WTI Crude may not have benefited from the highly anticipated sanctions placed by the Trump administration on Iran, perhaps partially due to just how many waivers were granted, and to sizable markets nonetheless. That did not stop money from pouring into the energy sector. That group has found support in a spectacular earnings season, and the sudden pop in natural gas prices. We'll touch on that shortly.

Keep at least half an eye on Treasury yields today. I know you always do, but Treasury goes to market today with $27 billion worth of 10-year paper. Keep in mind that last month's auction of this kind of debt resulted in the highest-awarded yield (3.225%) in more than seven years, and came with the lowest bid to cover since February. On top of that, Treasury's need to borrow more becomes plainly evident today, as this auction will feature an increased level of supply, up from the $23 billion worth of product that Treasury had previously been running with.

First off, my hope is that everyone is registered, and that everyone gets themselves in a position where they can cast a vote today, if they have not already done so. I have my opinions. I guarantee you that I will cast a vote for my preferences today. I know that many do not, but if you live in a nation that not only allows, but encourages public participation in the process, why would anyone ever abdicate? Guess that's you prerogative.

Now, I do not believe in looking at history as a guide on these matters, because I simply think that there are too many variables that differ from one era to another. That said, if one believes that history tends to smooth out these variables over decades, then you are in for some good news. According to a story that I saw at Investor's Business Daily, the average two-year return for the S&P 500 after any election regardless of legislative make-up has run at 16.9% over the last 60 years.

I bet that after the October that we just went through, some of you would sign up for something like that right now. With really not much of a range, the best outcome for stocks on average had come from a gridlocked legislature, and the worst from a unified congress controlled by the party in opposition to the White House.

Now, remember, much of that 60-year history encompasses eras where there was a lot more willingness to cooperate. I really have no idea how a split legislature would behave in 2018, but there is a good chance that we may end up finding out.

I think that industries that could be negatively impacted by a gridlocked congress could be big pharma, as this is an area that both the president and many Democrats have targeted in the past, and aerospace (let's hope some of that is priced in already), as there could be less support for defense spending going forward. I would not expect the democrats to gain enough of an advantage to seriously roll back enough deregulation to injure the banking sector.

Replace the word weasel with January Natural Gas futures. Whoa. There is no doubt from my perch on Long Island that there was a very sharp division between summer-like weather and mid-to-late autumn-like weather this year. There was nothing easy at all about that transition. Honestly, I can't remember the last time that I left the house without a jacket of some sort, and I have seen plenty of folks about town sporting their full winter gear, which I think is overdoing it a bit. That said, the first frost was quite some time ago.

Apparently, national inventories for Natural Gas are running more than 16% below their five-year average for this time of year, and are at their lowest levels for early November in 13 years. The largest domestic natural gas producer is Exxon Mobil (XOM) , for those just looking for some broad exposure. I am long that name. However, as those January futures ran more than 8% on Monday, and are now still trading at 3.53 on early Tuesday morning, there are other options that react more closely to the underlying commodity's performance.

Both the United States Natural Gas ETF (UNG) , and Chesapeake Energy (CHK) also ran more than 8% for the Monday session. A trader could gain some cheap exposure to the space through CHK, but in all honesty, I cannot endorse a name with a balance sheet like Chesapeake for anything other than speculation.

Oh, according to The Weather Channel, the balance of November could be rather nasty, and the likelihood is that for the mid-west and north-east, the snows will come early this year.

Yes, of course I have seen the news of increased insider purchasing, and this is a sign of confidence. Who can forget what a similar move by Jamie Dimon did to bolster JP Morgan (JPM) shareholders? I even jumped in on that move. Now, do the recent moves by two firms currently swimming in troubled waters for different reasons attract the same kind of support?

At first glance, news of Ginni Rometty (and some other IBM execs) purchasing just under $1 million worth of International Business Machines (IBM) in the wake of the Red Hat purchase  (RHT) (a deal that Wall Street not only looked at as expensive, but considered to be a desperate move.) caught my attention. My thoughts? Yes, Rometty did force some life into the stock. IBM is fine as a dividend play, but we have all seen Rometty express confidence before, maybe not with money, but with words. And for this name, I am going to pretend that I am from Missouri. Rometty is going to have to show me. No more good will.

Now, Larry Culp's investment in General Electric (GE) is more interesting. Culp bought 225,000 shares valued at about $2.2 million. It's hard to forget that former CEO Jeff Immelt paid $28 for 100,000 shares back in May of 2017 in an attempt to slow down a wave of negativity that appears to have never stopped. That said, Lary Culp is not Jeff Immelt. Not even close. Now, this week analysts throw around the idea of a previously unexpected higher tax burden for the firm in both the U.S. and UK. Last week, Moody's downgraded the firm's credit rating by two notches. Then came Monday, when high-profile analyst John Inch of Gordon Haskett threw around the idea of a $5 GE, despite his own $10 price target.

What do I think? I think we know Larry Culp's track record. I think we know that he would not have taken this job if he thought this was a lost cause. I also think that there will be a place an time to invest in GE. This is not Sears (SHLDQ) . 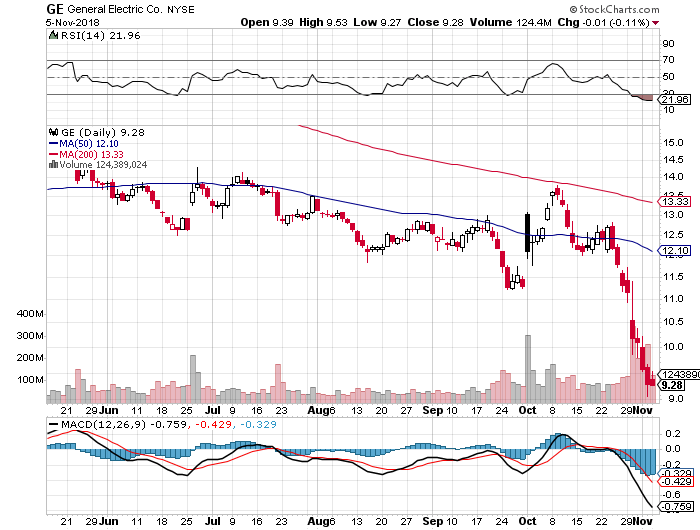 The dividend is no longer a reason to invest in this name. This idea is really just a risk-averse way to bet on Larry Culp, as it has become apparent that perhaps not one other person is both capable, and /or willing to save this firm. Psst. I am going to set this trade in motion myself, several hours after this article is public. We do not need to get in at the very bottom. Something tells me that we will get a few at bats before they call it a ballgame. The firm will go to the tape with quarterly earnings again in January and April. We'll go out to June in order to give Culp two more swings at quarterly results that he can truly cal his own.

The trader will receive an aggregate credit of $2.24, or $224. In exchange for this payment, the trader is at risk for eight months. If the shares never go lower, that's a nice dinner for the trader and a pal. Worst case? The shares go considerably lower from here, and this trader ends up long 300 shares at an average net basis of $7.25.

How's the risk/reward proposition look from there? Not too bad, in the opinion of one Stephen J. Guilfoyle. I'll see you out on the field.

Under The Radar, Literally

Sarge fave Kratos Defense (KTOS) reports its quarterly digits tonight. This release will be very interesting, as this high-end drone/technology producer for the defense industry is expected to post EPS of $0.03 on revenue of $157 million. The future of firms like this truly depend upon the planned increase in defense spending already in motion, meaning that this firm might be more susceptible to election results than its own performance, at least for now.

You may recall that we took some off at $14, and then moved our target price up $15. That is where my target remains. If you are one of the folks that has been in this name with me since the beginning, my current panic point is $11.