By TIMOTHY COLLINS Aug 07, 2019 | 03:33 PM EDT
Disney ( DIS) treated this quarter as if it were a group of people in a run-down, abandoned house trapped by a snowstorm outside. Anything that could be burned was tossed in the fire. It's the kitchen sink approach, but on steroids. Let's not pretend it's anything different.
Yes, Disney missed on earnings by a mile, posting $1.35 per share vs. $1.75 per share.
Revenue also came up one-half percent shy of expectations. Expenses caught up with Disney this quarter. The expenses of integrating 21st Century Fox ( FOX) assets into Disney certainly came into play. Add in the costs to consolidate Hulu as well as spending on Disney Plus and ESPN Plus for the upcoming streaming service, and the miss isn't shocking.
Actually, the best definition here is planning ahead. Dump the costs all at once. Execs know streaming will carry additional costs and weigh on the bottom line in future quarters.
After all, Disney is pricing the new streaming service at $12.99, which will include Disney Plus, ESPN Plus, and ad-supported Hulu. It's a shot directly across the bow of Netflix ( NFLX) , but it will come at a short-term cost. The last thing Disney needs is Fox becoming an albatross around its neck, so Disney is swallowing its medicine in a single gulp.
Disney knows it. Wall Street knows it, too. How else can you explain the stock not being down significantly more on Wednesday? Granted, it's not a banner day with the stock down 5%, but when you look at the weekly chart, this is absolutely nothing. A blip.
From the start of 2018 through the first quarter of 2019, Disney traded in a wide, slowly rising bullish channel. Strong April earnings propelled Disney from around $115 to $130. Since that time, we've barely dipped below $130. Wednesday, we're still roughly $5 above that level.
To be bearish on Disney and claim victory is just silly. For anyone short post-earnings from April, you had to sit through a draw-down, average up, potentially average up again, to probably escape breakeven. That's a lot of work and a lot of risk to claim victory.
The technical landscape has shifted a bit now. If support fails, then I would target the $122.50 to $125 area for a long entry, but I also believe Disney's valuation metrics are shifting. Either Disney needs to get some of the premium valuation we see on Netflix or Netflix needs to come back to a traditional media valuation. I don't see that happening to Netflix, so I expect Disney will become more of hybrid valuation approach. I would let the dust settle for a few days, but I think this will end up being another opportunity to own Disney and get rewarded for years to come. 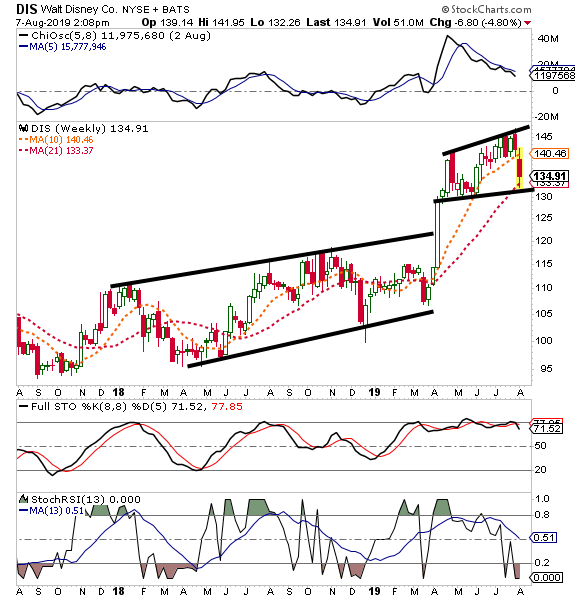 DIS is a holding in Jim Cramer's Action Alerts PLUS member club.

Get an email alert each time I write an article for Real Money. Click the "+Follow" next to my byline to this article.
TAGS: Entertainment | Investing | Stocks | Digital Entertainment | Stock of the Day