In his second "Executive Decision" segment of Mad Money Thursday night, Jim Cramer sat down with David Moatazedi, president and CEO of Evolus Inc. (EOLS) . Evolus is a company that is going head-to-head with Allergan plc  (AGN) with a new drug to compete with Botox. Shares of EOLS have surged from $16 to $29 after the company received FDA approval on Friday. EOLS has nearly tripled from its December nadir.

Moatazedi said it's an exciting time to be in the aesthetics space. The company's drug, Jeuveau, just received approval and it is the first new treatment in the category in many years. He said Jeuveau was tested against Botox and the company will be releasing the results of its most recent studies soon.

When asked how Evolus can compete against Botox, which is a household name, Moatazedi explained the company built its brand specifically around millennials. Jeuveau does not have any medical uses, only aesthetics, which affords more freedom in how the company markets itself and how it grows.

Cramer said Evolus is an interesting story, but investors need to be careful after the stock's big run. Let's look at some charts.

In the daily bar chart of EOLS, below, we can see that prices have sprinted higher the past five weeks. Like actual sprinters, the price of EOLS could need a rest or pause or even a pullback in the days ahead to digest these gains. Prices gapped above the rising 200-day moving average line and spent the month of January above the now rising 50-day moving average line.

The daily On-Balance-Volume (OBV) line has been rising from late December signaling some aggressive buying. The Moving Average Convergence Divergence (MACD) oscillator was below the zero line for several months last year but it is now above the line in bullish territory.

In this limited weekly bar chart of EOLS, below, we can see that prices just gapped above the rising 40-week moving average. Volume was very heavy, the OBV line turned up and the MACD oscillator is moving up to the zero line.

In this Point and Figure of EOLS, below, we can see the sharp rally without the price gap. An upside price target of $57 is being projected. 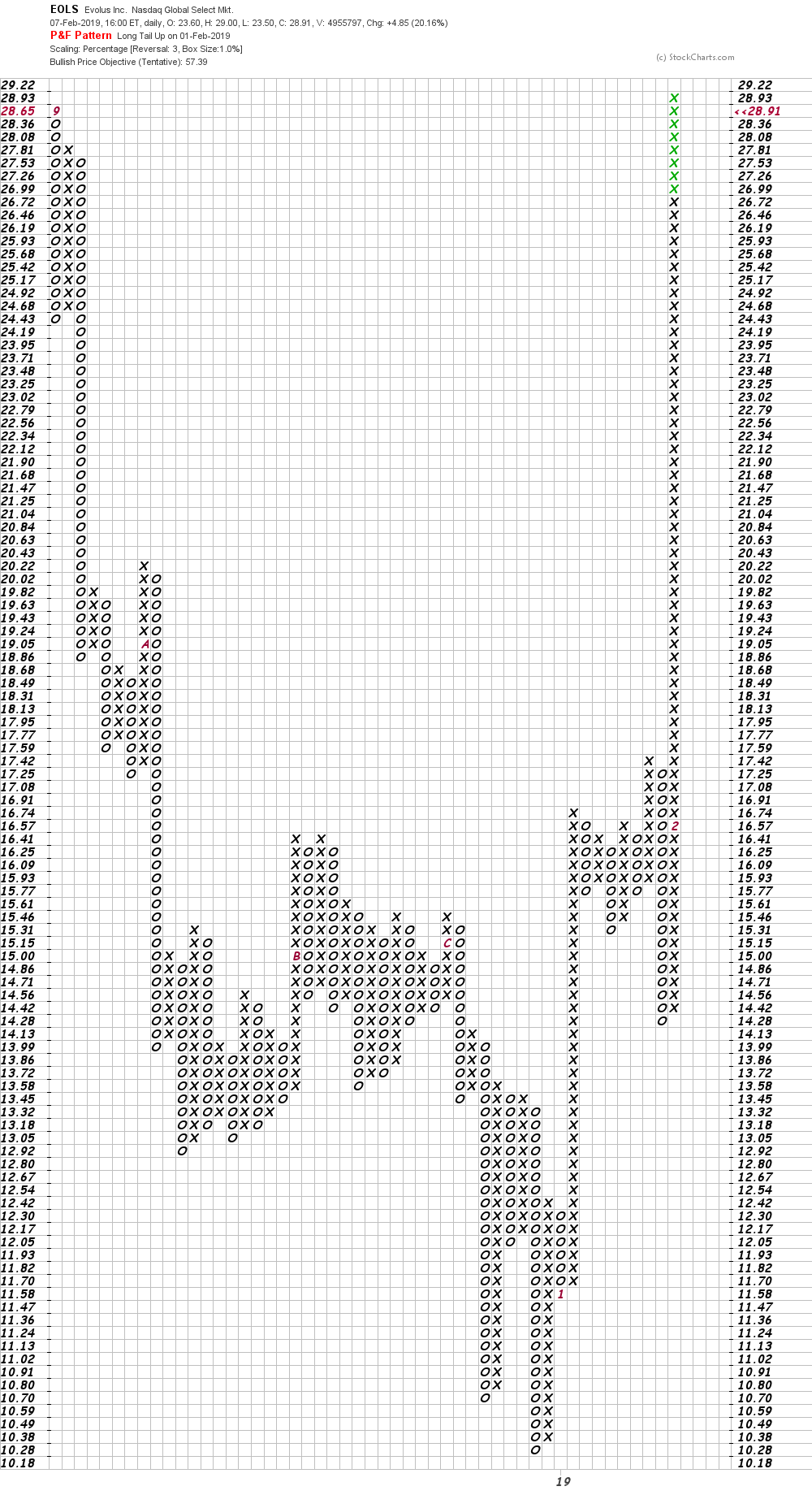 Bottom-line strategy: There is little doubt that the price of EOLS has moved fast and a period of sideways consolidation is probably a good idea. After a pullback or correction and consolidation we'll have a better idea on where to stop out longs. Once we have an idea of the risk, aggressive traders can approach the long side.

Get an email alert each time I write an article for Real Money. Click the "+Follow" next to my byline to this article.
TAGS: Investing | Stocks | Technical Analysis | Healthcare | Mad Money