If you felt depressed at the end of December, you might feel better knowing you were not alone. Last week, Barron's gave its accounting of how its nine Round Table, big-name, money managers did with their picks in 2018. Their results were far from pretty.

Scott Black selected four losers out of five picks. Those who invested equal dollar amounts in all of them saw average total return losses of (-25.68%). Ouch.

Abbey Joseph Cohen didn't even manage one winner out of five -- but she did, at least, manage to show average total return losses of just (-11.86%). 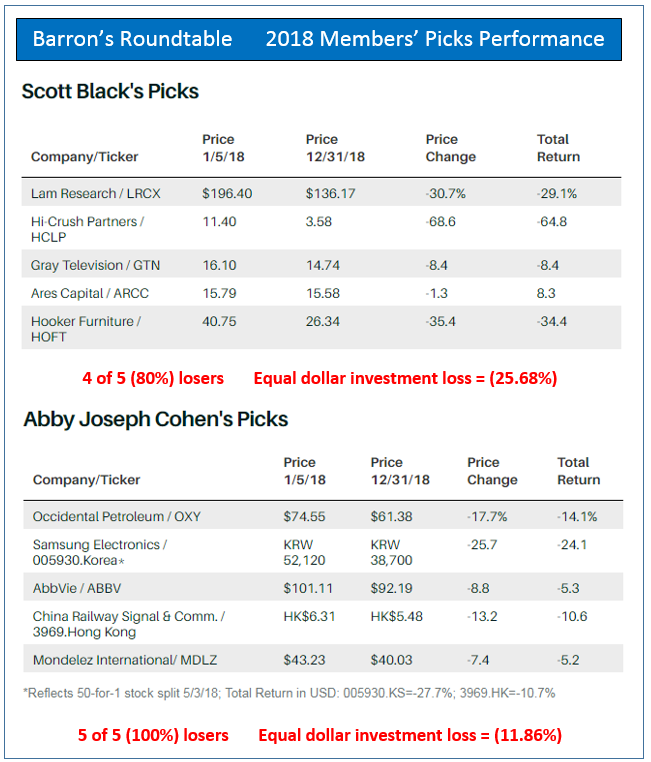 Henry Ellenbogen, a man I'd never heard of, earned the silver medal of this group, with five out of six winners, an 83.3% success rate. Owning all his selections would have garnered an average 5.43% gain. That modest figure was actually pretty impressive, considering the way the year ended. 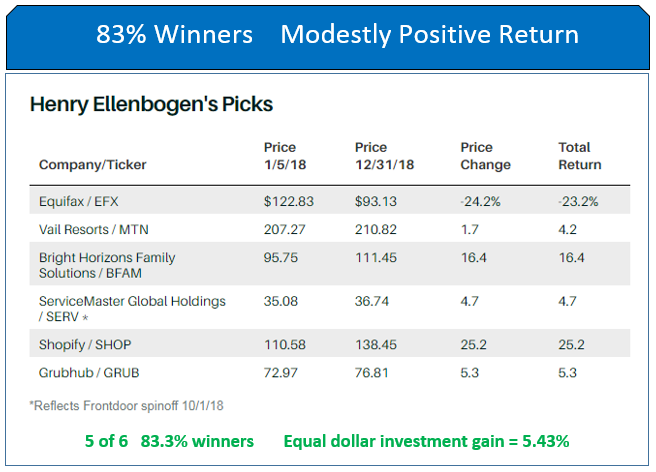 Mario Gabelli gets a lot of face time on CNBC and in print media. His 3 out of 10 success rate was unimpressive, though, as was his average negative (-10.16%) total return on his picks for 2018. 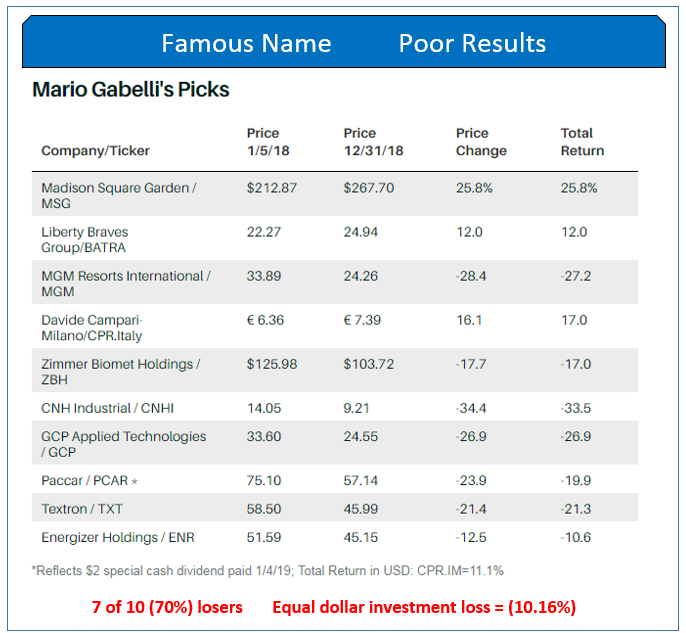 Jeff Gundlach is mainly known as a bond manager. Last year's income-oriented picks didn't fare well as alternatives to equities. Four out of five of his recommendations declined. His average annual total returns weighed in at (-10.80%). 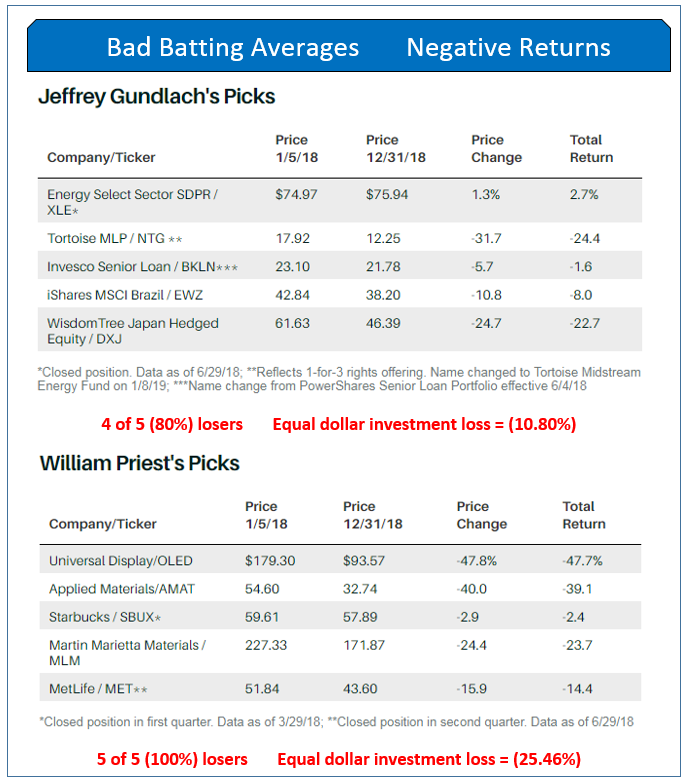 Oscar Schafer was the clear winner of last year's derby. He showed 60% winners in a tough, tough, environment and posted overall average gains of 9.88%. That was helped tremendously by his selection of little-known Evertec (EVTC) , which zoomed upwards by more than 100%. That more than compensated for big losses in the equally obscure names ANI Pharmaceuticals (ANIP) and CommScope Holding (COMM) . 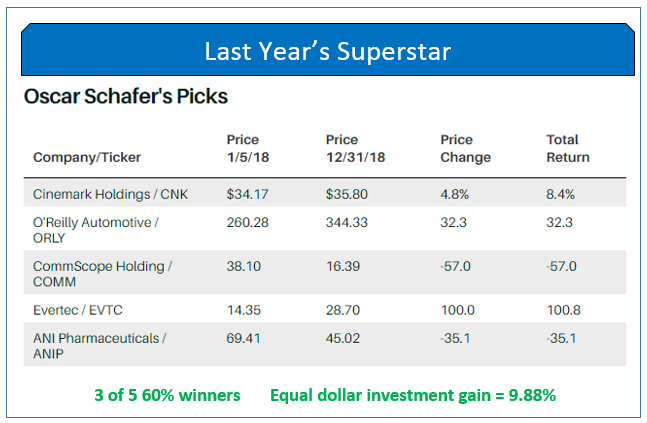 Manager Paul Wick saw all his "long idea" picks decline. Those were total disasters, dropping about 30%, on average. His short recommendations, though, proved spectacular. They plunged by an average of 56.15%.

If you put equal dollars into all six recommendations, you lost an average 6.22%. 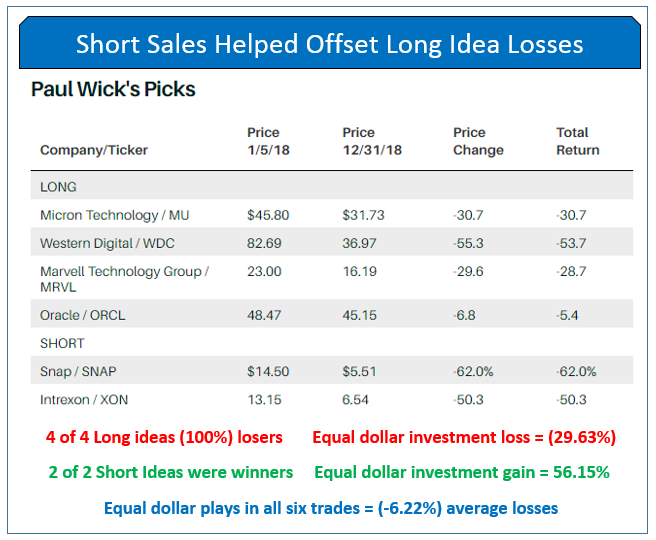 Meryl Witmer did better than most, although she failed to make money. Her four picks showed the least variation of all nine stock pickers. Her worst stock, CarMax (KMX) , dipped by 11.7%, while her best selection rose by 11.6%. 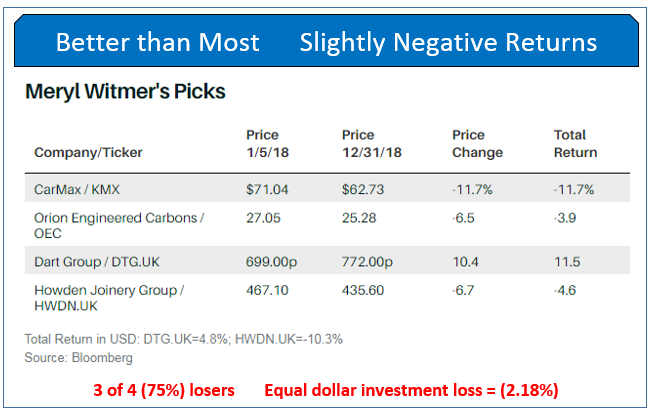 Barron's didn't total up all their experts' results, so I did that for you. About 31% of the 561 picks went up while around 67% fell back. Those rare investors who bought all long ideas while shorting all negative recommendations would have seen their portfolio decline by about 8.56% overall. 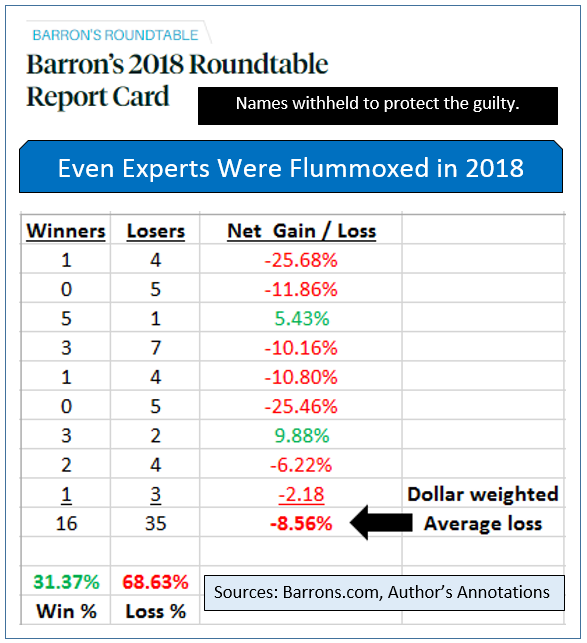 Based on those less than stellar numbers, you might want to take this week's Barron's cover story with a grain of salt. It features a blend of repeat and new money managers' current crop of best ideas for 2019.

(This commentary originally appeared Jan. 16 on Real Money Pro. Click here to learn about this dynamic market information service for active traders and to receive Doug Kass's Daily Diary and columns from Paul Price, Bret Jensen and others.)

Get an email alert each time I write an article for Real Money. Click the "+Follow" next to my byline to this article.
TAGS: Fundamental Analysis | Investing | Stocks | U.S. Equity