Look at this chart of the CBOE 10-Year U.S. Treasury Yield Index. Just a few short trading days ago, the yield on the 10-year Note was down near 1.40%, at support, at the green line. Less than a week later, yields at 1.60%, are fast approaching that blue line. If yields cross that blue line, I think stocks will notice. Let's call the blue line 1.70%.

Whereas a week ago I thought the Daily Sentiment Index (DSI) would help stop a decline in rates, because it was already at 75, meaning if rates fell much further, sentiment would have gotten too extreme. But now the DSI is at a very neutral 61. It gives us few clues.

It's often hard to tell which is leading, the banks or the bonds, and this is no different. The Bank Index was 142 last time rates were at 1.60 and now it can't get back up there. Which ever way this triangle breaks will be important. conventional wisdom says it should break to the upside but since when has this market paid attention to conventional wisdom?

The curious part of the bond decline on Monday, aside from the fact that banks have yawned at it, is that the utilities haven't been moving, either. Oh, sure, they have come down a bit after hitting resistance at 930 a few weeks ago, but now they hover at 920.

The head-and-shoulders top is easy to see, but just in case, I have drawn it in for you. I have been of the mind that the utilities should make another run upward. So now it's the test, will they break out and get going? I think they will, but if I am wrong and the head-and-shoulders top comes to fruition, then we know yields are going to cross that blue line on the chart above.

Away from that, Monday was another day of chop in the market. What else can we call it when the S&P closes flat as a pancake on the day? My biggest concern remains the rising new lows as the 10-day moving average on both the New York Stock Exchange and Nasdaq are rising. 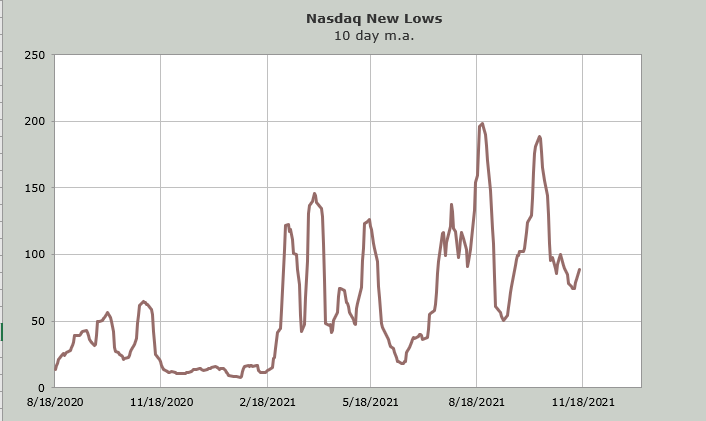 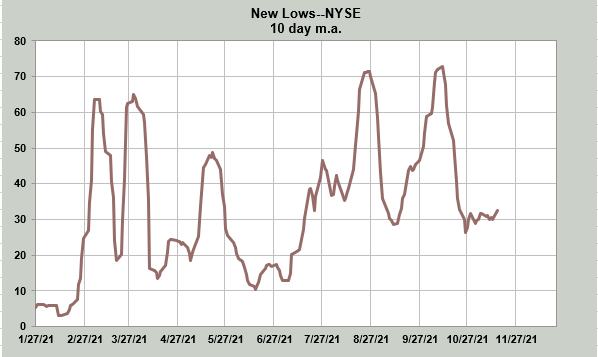 I have said that it is the time of the year that gives me a reason to rationalize the rising new lows, but it goes against my nature to rationalize an indicator.

Finally, it is Options Expiration week and in 2021, they have been volatile. I point that out because the Daily Sentiment Index (DSI) for the Volatility Index is back at 13. Remember, readings in the single digits tend to bring about a bout of volatility. Two weeks ago, this got to nine and then last week we saw the S&P drop 60 points in two days. That means if the market rallies in the next day or so, don't get too complacent.

These chop-fests are so difficult.