Artisanal online marketplace Etsy Inc. (ETSY) is one of Jim Cramer's 10 Stocks for a Stay-at-Home Pandemic. Cramer recently sat down with Josh Silverman, CEO of the company, which beat earnings estimates.

The daily On-Balance-Volume (OBV) line has followed the price action since November and its rise tells us that buyers of ETSY have been modestly more aggressive.

The Moving Average Convergence Divergence (MACD) oscillator moved above the zero line in January and is still positive.

In the weekly bar chart of ETSY, below, we can see the price action over the past three years. Prices rallied seven-fold from their 2017 lows into late 2018/early 2019. A correction unfolded over the next several months until November 2019. The rally brought prices back above the rising 40-week moving average line.

The weekly OBV line hardly weakened during the corrective phase and tells us that investors with foresight were probably buyers. The MACD oscillator crossed to the upside below the zero line in early January signaling a cover shorts buy signal.

In this first Point and Figure chart of ETSY, below, we used daily price data. Here the chart shows that an upside price target of $57 that has been reached. 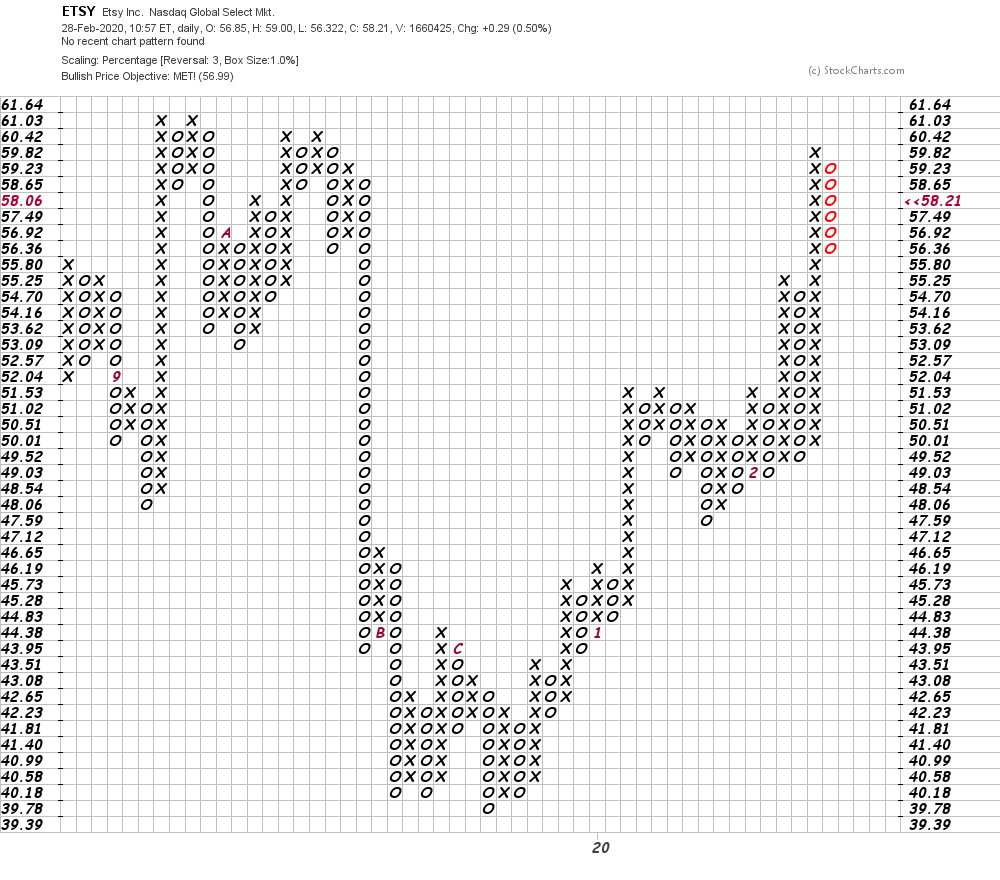 In this second Point and Figure chart of ETSY, below, we used weekly close-only data to construct the chart. Here a potential longer-term target of around $75 is being projected.

Bottom-line strategy: ETSY could trade sideways in the $55-$60 area for a while before renewed gains. Aggressive traders could be buyers risking a close below $47.

Get an email alert each time I write an article for Real Money. Click the "+Follow" next to my byline to this article.
TAGS: Investing | Stocks | Technical Analysis | Retail | E-Commerce | Mad Money | Executive Interview