For his "Executive Decision" segment, Jim Cramer spoke with Josh Silverman, CEO of Etsy Inc. (ETSY) , a stock that plunged more than 18% this week after the company reported earnings in the middle of the market slide.

Silverman said despite the stock market's reaction, Etsy had a terrific quarter and is seeing solid growth thanks to new initiatives that are helping bring even more buyers and sellers together. One of those much-asked-for initiatives is free shipping. Free shipping is now expected by many buyers, Silverman said, and Etsy is helping to make that standard for all 2.3 million Etsy sellers.

When asked about their valuation versus their market opportunity, Silverman said it's very hard to build a marketplace that includes 43 million buyers and 2.3 million sellers, but once you have it, it's very durable and hard for competitors to enter the market and disrupt you. Let's move on to the charts and indicators to see if they are hard to interpret.

In the daily bar chart of ETSY, below, we can see a number of bearish signals. For the past five months prices traded sideways and moving average followers were getting whipsawed as ETSY crossed above and the 50-day moving average line. With the recent selloff ETSY closed below the 50-day line and went on to gap below the rising 200-day line. There were a number of volume surges the past five months but none of them created a sustained rally.

The On-Balance-Volume (OBV) line peaked in late February and made an uneven decline suggesting sellers have been more aggressive. The Moving Average Convergence Divergence (MACD) oscillator has been mostly negative since early March.

In the weekly bar chart of ETSY, below, we can see that prices stayed above the rising 40-week moving average line for more than two years but that changed this week. The $60-$70 area is now likely to act as resistance.

The weekly OBV line has been stalled for several months while the MACD oscillator has been in a take profits sell mode since May.

In this Point and Figure chart of ETSY, below, we can see months of distribution (selling) and a break down below $57.49 (the May low). The software looks at the sideways price action and projects it downward for a bearish price objective of $37. 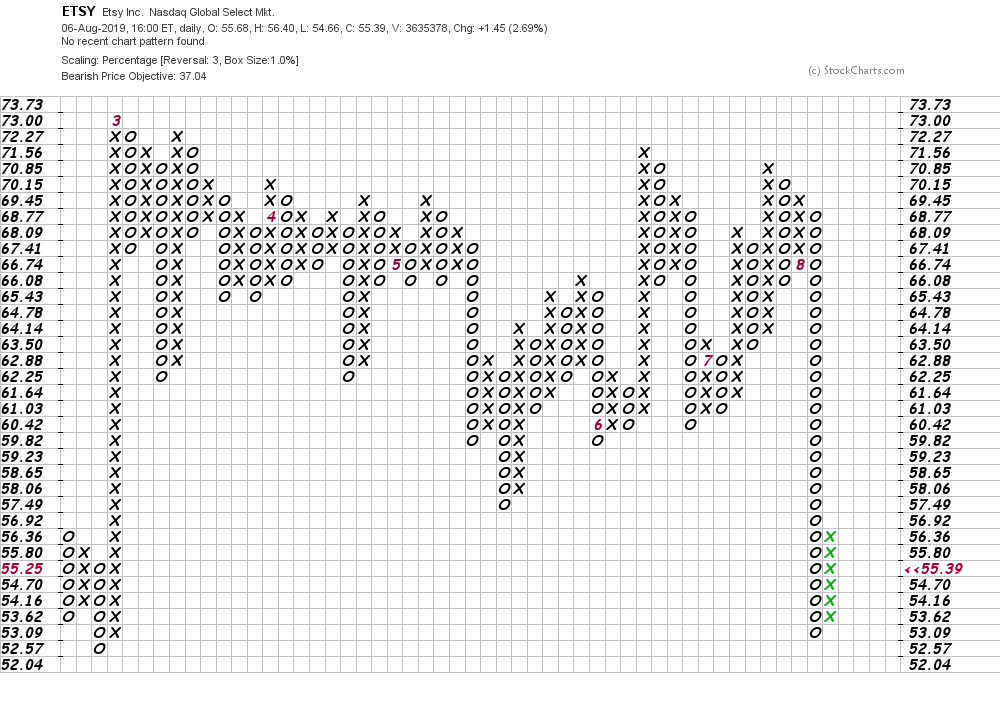 Bottom-line strategy: ETSY could rebound a bit but the risk for longs looks real with a possible downside price target of $37.

Get an email alert each time I write an article for Real Money. Click the "+Follow" next to my byline to this article.
TAGS: Investing | Stocks | Technical Analysis | Retail | E-Commerce | Mad Money | Executive Interview

This Oil Name Is Sinking, and That Makes It a Bargain

HollyFrontier got hit on Wednesday on a court ruling, and here's how to play it at a great price.

A Lesson From 'Philosophy of Tops'

Consider today the idea that tops seem to come out of nowhere.

Jim Cramer: We're Not Yet Inured to Coronavirus Disappointment

Microsoft says it will miss its personal computer forecast, but Marriott appears to be trading up a tad.

Don't let zeal to catch a bounce blind you to the risk involved in this market right now.

This 'Cash Strapped Consumer' Retailer Is on Track for Aristocracy

TJX appears on a path to become a Dividend Aristocrat, and investors can enjoy now the dividends and move in its share price.