Same As It Ever Was

Equity markets diverged significantly on Thursday, or so it would seem. The Dow Jones Industrials took it on the chin, led lower by Walgreens Boots Alliance (WBA) , but also by big oil and aerospace. That weakness is a Covid-19 story. The more the virus spreads, the greater the strain on resources regionally, the greater the need to slow down or even reverse recent economic progress. The greater the need, nationally to rely upon poorly funded fiscal policy. Weakness across the small-caps was even more pronounced. The Russell 2000 gave up 2%, while the S&P 600 surrendered 2.3%.

Only two of nine sectors closed Thursday's regular trading session in the green. Investors fled into Information Technology names, where there was overt out-performance across both the semiconductor and software industries. Capital once again also flowed into internet-type names, enough to keep the Communications Services sector just slightly above water. The result was a market that at the headline level showed not just gains, but also records for both the Nasdaq Composite as well as the Nasdaq 100, a blue chip index that offered the appearance of roadkill, and the broadest large-cap index of them all (S&P 500) that just sort of worked its way lower in methodical fashion.

The thing that was interesting about Thursday was twofold. First, the breadth was awful, even at the Nasdaq market site, where losers beat winners by more than two to one and declining volume edged out advancing volume even as capital still sought out growth or "safety" in tech and in mega-cap types. Trading volume, by the way, remained unimpressive, as it has been all week. Volume moved sideways on Thursday from Wednesday at both of New York's primary exchanges and was well below recent moving averages for aggregate membership across both of our broader large-cap indices.

Does this mean the action this week does not rally count? Not exactly. Every game played in this league does count in the standings. Wins are wins and losses are indeed losses. I think it quite obvious, however, that we have reached a point of portfolio manager indecision.

There is a belief that the economy will slow down or even reverse some gains as the pandemic refuses to pause for breath. Markets may need to see positive news on this front for the flow of available capital to broaden. Without such a fortunate turn. the month of sideways action for the S&P 500 will turn the wrong way.

That brings me to my second interesting take on Thursday. We spoke of "inside" and "outside" days just 24 hours ago when discussing the Nasdaq Composite. We thought we saw an opaque case for trend continuation there, which was the way it played out, at least for one day. 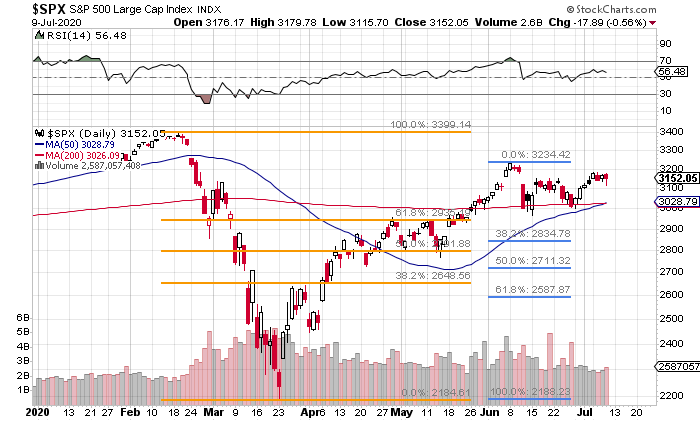 From the aerial view, the S&P 500 has shown tough sledding on any approach of the 3200 level, with consistent support found just below the 200-day simple moving average (SMA), which has simply flat-lined right through this crisis. Good for traders. Lousy for investors. Now, just like on Thursday, let's zoom in. 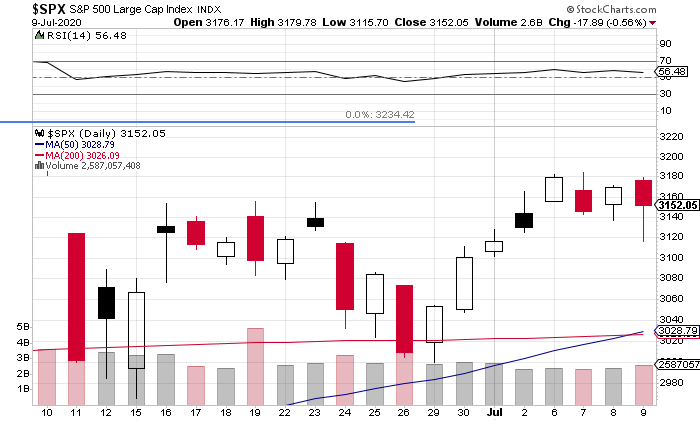 Readers will note at the extreme right an outside day for the S&P 500 on Thursday, as the range (wick) is greater than the day prior, as is the space (candle wax) in between the open and close, but in a different direction. That turns an "outside" day into an "outside" reversal. This does not necessarily indicate a change in trend, which has been sideways. However, this does likely signal increasing volatility.

There is a positive. See the blue line (50-day SMA) cross over the red line (200-day SMA)? That's a golden cross. No sure thing, but a technical positive with equity index futures shading red very early on Friday morning.

In Your (My) Face

First things first. Yes, markets will try to price in the national election in November. While this is a current topic of discussion, I do not think this is as of right now a significant factor in price discovery. If words are to be taken as meaningful, the challenger would like to see higher taxes at the corporate level than the incumbent, and one would expect some regulatory rollbacks to be reversed. Both talk tough on trade and in bringing home the manufacturing base. The thing is that neither the incumbent nor the challenger scare Wall Street. That could change. Right now, it is not the focus.

The focus for markets is right smack in our face. The next phase of fiscal support, which is what we should call it. Stimulus is what happens in a free economy. This economy is not truly free and cannot be until the public health crisis has passed.

On Thursday, Treasury Secretary Steven Mnuchin (who, in my opinion, has performed well amid an unforeseen nightmare scenario) told the press that the administration continues to work with Senate leadership to pass such a bill by the end of the month. The sticking points? Payments of what size, or to whom as households remain strained, Extending the federal expansion of weekly jobless benefits, keeping still struggling small businesses in business (jobs).

House Democrats long ago passed a $3.5 trillion bill that would extend many such support programs throughout year's end. The Senate, which will take this up in earnest on July 20, is talking much lower numbers, in the neighborhood of $1 trillion.

Obviously, there will be some give and take with an eye on the election. This is what the markets will move on this month. Many economists see a need for a package approaching $2 trillion at a minimum. In the meantime, investors appear to be buying the longer end of the U.S. Treasury yield curve. The spread between what U.S. three-month paper and the 10-year note yield broke below 50 basis points on Thursday, and I see it moving around 44 basis points here on Friday morning. Interpreted for the lay person, this can be seen as bond markets starting to doubt recovery. For those keeping score, the federal government's budget deficit for June ran up to a cool $863 billion.

... that as economic recovery slows, demand for the ability to work from anywhere will remain elevated. In addition, in all likelihood, the only "back to school" shopping done this year might be closely tied to remote learning. I am sure most already have seen quarterly numbers for PC shipments, and they are hot.

This is a positive not only for hardware makers such as HP Inc (HPQ) , and Apple (AAPL) , but also for Alphabet (GOOGL) and Microsoft (MSFT) as providers of popular operating systems.

This is the last regularly scheduled Market Recon until Monday, July 20. Your pal needs a week off to work on taxes and recuperate a little. That week is next week.

Get an email alert each time I write an article for Real Money. Click the "+Follow" next to my byline to this article.
TAGS: Indexes | Investing | Politics | Stocks | Treasury Bonds | Software & Services | Technology Hardware & Equipment | Real Money | Coronavirus

If You Own Smaller Stocks, Your Portfolio Could Be in for a Whole Lotta Oof

Rising interest rates are crushing small stocks, so keep an eye on the bond market.