In the second Executive Decision segment of "Mad Money" Wednesday, Jim Cramer spoke with Charles Meyers, president and CEO of Equinix Inc. (EQIX) , a data center provider with shares up 56% so far in 2019.

Meyers said the underlying demand for data centers remains strong as more companies are adopting the cloud as their primary infrastructure. Even for large companies, which typically have their own infrastructure, much of that infrastructure is moving to facilities such as those of Equinix. The hybrid-cloud model, which utilizes both public and private clouds working together, is gaining momentum.

When asked about the economic environment, Meyers said Equinix is not seeing any impact from tariffs, trade or the yield curve inverting. He said there is strength in all segments, especially in retail.

Let's visit with the charts and indicators to round out the analysis of Equinix.

In this daily bar chart of EQIX, below, we can see a decline into a late December low with the broad market retreat followed by prices climbing more than $200 a share into August. EQIX is above the rising 50-day moving average line with a test in late April and a test/temporary break in late July. The rising 200-day moving average line is about $100 below the current price level, so we could say the rally is extended. The On-Balance-Volume (OBV) line has made a new high for the move up this month to confirm the new high in price. The Moving Average Convergence Divergence (MACD) oscillator is above the zero line in a bullish mode but narrowing.

In this weekly bar chart of EQIX, below, we can see some interesting technical developments. Prices made a large correction from October 2017 to December 2018 before resuming the advance. EQIX is above the rising 40-week moving average line, maybe too far above it compared to the 2017 advance. The weekly OBV line has leveled off the past three months unlike the daily OBV line. The MACD oscillator nearly crossed to the downside in July but is now bullish again. Something to keep an eye on.

In this Point and Figure chart of EQIX, below, we can see that prices reached a longer-term price target around $550. Prices could move higher but we probably need a period of fresh accumulation or a sideways consolidation pattern. 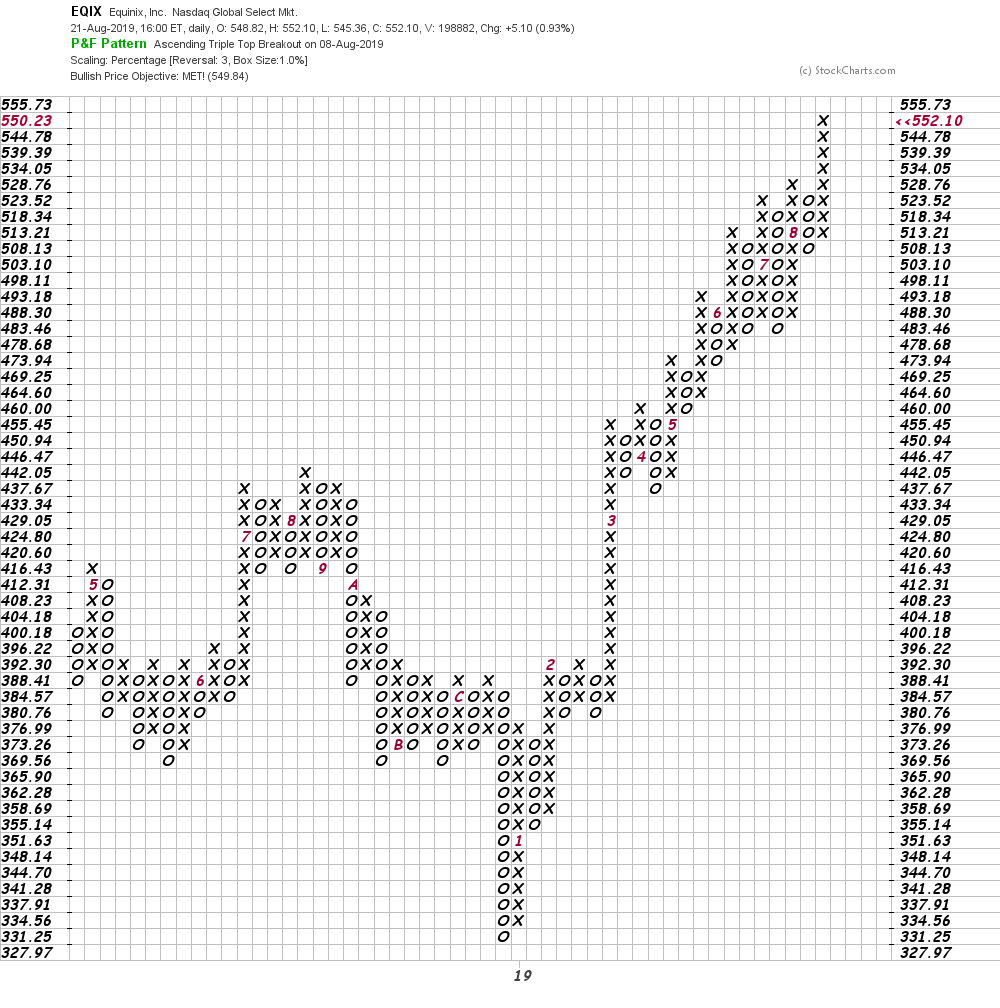 Bottom line strategy: There is nothing particularly wrong or bearish about the charts of EQIX, but I suspect we will have a few weeks of sideways price action bounded by the $520-$570 area.

Get an email alert each time I write an article for Real Money. Click the "+Follow" next to my byline to this article.
TAGS: Investing | Stocks | Technical Analysis | Software & Services | Technology | Technology Hardware & Equipment | Mad Money | Executive Interview | Real Money