In his second "Executive Decision" segment on Mad Money Tuesday night, our own Jim Cramer sat down with Rob McNally, president and CEO of EQT Corp. (EQT) , the natural gas producer embroiled in a bitter proxy fight with Rice Energy, a company it acquired in 2017.

McNally said since his management team was put in place in November 2018, EQT has split its upstream and midstream businesses and has outperformed their peers. He admitted that in absolute numbers, this has been disappointing for shareholders, as natural gas prices have fallen.

When asked about the proposals made by those backing Rice Energy, McNally said simply that those claims are not based in reality. He said while EQT is drilling fewer wells than before, they still expect 5% production growth this year.

Let's check out the charts now.

Trading volume has been light and the daily On-Balance-Volume (OBV) line has been weakening since early April telling us that sellers of EQT have been more aggressive. In the lower panel is the 12-day price momentum study, which tells us that the decline from May has not slowed.

In the weekly bar chart of EQT, below, we can see a three-year decline for this stock. Prices have remained below the declining 40-week moving average line for much of the past three years.

The weekly OBV line has been neutral until early 2019 but is pointing lower again. The weekly Moving Average Convergence Divergence (MACD) oscillator just crossed to the downside from below the zero line -- another outright sell signal.

In this Point and Figure chart of EQT, below, we get a different view of the downtrend. A tentative bearish price target of $13 is being shown. 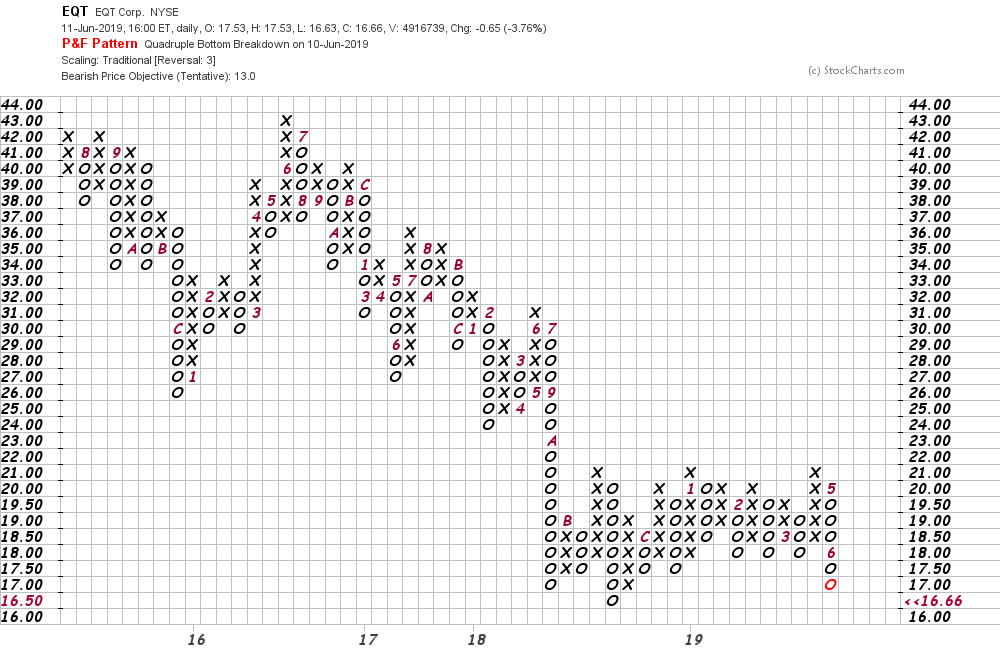 Bottom-line strategy: There is nothing positive or constructive about the charts of EQT. Avoid.

Get an email alert each time I write an article for Real Money. Click the "+Follow" next to my byline to this article.
TAGS: Investing | Stocks | Technical Analysis | Natural Gas | Mad Money | Executive Interview