If the market rallies much more, we're going to go into the limbo period of sentiment. You know what I mean, where the bears don't want to switch camps, but the rising market makes them warm up just a little bit. So we don't get a big change in sentiment, but a more gradual, grudging one.

I saw only two or three calls for capitulation on Thursday, as opposed to earlier in the week when it was non-stop. I am now seeing more "it's a bear market rally" or "we're oversold." Well let's unpack that oversold thing for a minute.

Breadth on the New York Stock Exchange has been red only three times in the last 10 trading days. That means the rally didn't just start Wednesday or Thursday, or even last Friday. As I noted the other day -- before we had back-to-back up days -- the S&P was actually higher than it was on May 11. That's when the rise began. That's when the breadth made its low.

So, are we oversold?

In fact, on a short-term basis, using breadth, we're a little overbought. The last three of four times the Oscillator has gotten up here the overbought reading created quite a pullback. In October it sent us into a sideways market.

Another sign that we are short-term overbought is when we look at the McClellan Summation Index and what it will take to roll it back over from the current up to down. It now needs a net differential of negative 4,700 advancers minus decliners (again, this is because breadth has been good). You can see that is actually more than was required in early April. We have to go back to the March 2020 lows/April 2020 rally to see a time we needed more.

In the big picture that was bullish. If you squint you can see each time the Russell saw a little dip/pullback to relieve the overbought condition. So no, we are not short-term oversold, we are short-term overbought.

We are, however, on an intermediate term, still oversold. The Hi-Lo Indicator no longer needs a magnifying glass to see the turn up now. That's still oversold. This is Nasdaq's, but the New York Stock Exchange looks similar and the NYSE had more new highs than lows for the first time in weeks on Thursday. Typically, that means we'll see this indicator get moving to the upside quickly. If we don't collapse in the next week (not my expectation) I would expect this to zip upward. 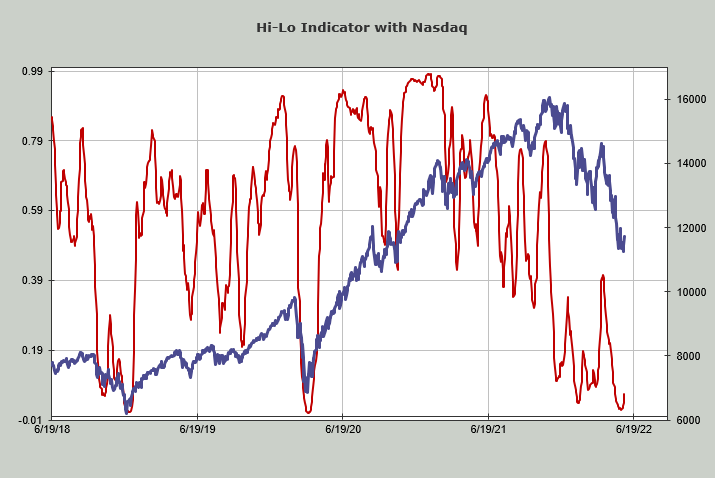 Energy has been the go-to place for investors. The other day I noted that the Daily Sentiment Index (DSI) for oil was on the verge of getting to 90, especially if oil crossed 110. It did cross 110 and the DSI got to 91. Gasoline is at 92. So a pullback in energy should be expected and that would probably cool breadth off a bit, causing the Oscillator to pullback from the overbought level. 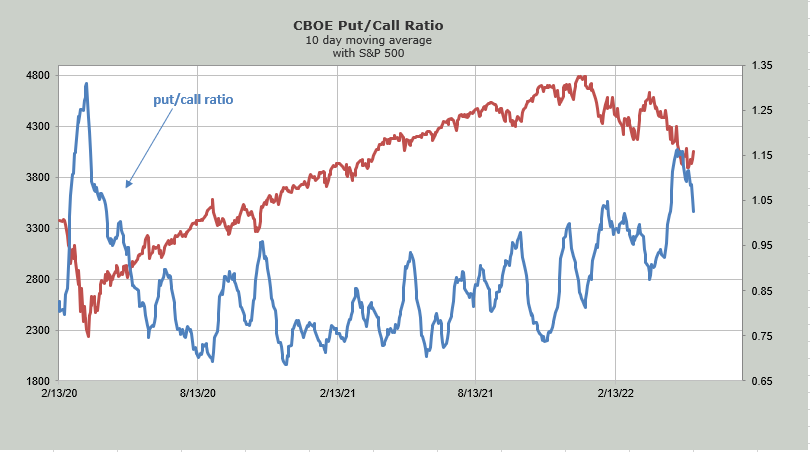 On the sentiment front, I expect if we get over last week's high in the S&P -- we'll call it 4100 -- folks should stop the capitulation talk for a while and maybe warm up. The 10-day moving average of the put/call ratio has come down from 1.16 to 1.03 so we're seeing some minor shift in the last few weeks.