By BRUCE KAMICH Jun 19, 2019 | 10:34 AM EDT
Stocks quotes in this article: EMR, MMM
The possibility of no trade deal with China at next week's G-20 summit in Japan is real and Jim Cramer cautioned his "Mad Money" audience about that possibility Tuesday. He was bearish on the industrials and noted that Emerson Electric Co.  ( EMR) was one name along with 3M Co. ( MMM) that could see weakness. Let's check out the charts of EMR.
In this daily bar chart of EMR, below, we can see that prices have been weak since early October with a second peak in late April. EMR is trading below the declining 50-day moving average line and the bearish 200-day line. The daily On-Balance-Volume (OBV) line has been in a decline since September and suggests that sellers of EMR have been more aggressive the last eight to nine months. The Moving Average Convergence Divergence (MACD) oscillator turned bearish again in early May and only managed a cover shorts buy signal earlier this month.

In the weekly bar chart of EMR, below, we can see that prices are below the bearish 40-week moving average line and the slope has been negative since September. The weekly OBV line peaked at the beginning of April and the MACD oscillator is in an outright sell mode below the zero line.

In this Point and Figure chart of EMR, below, we can see that the software has projected a downside price target of $48 -- off the bottom of this chart and back to levels not seen since 2016. 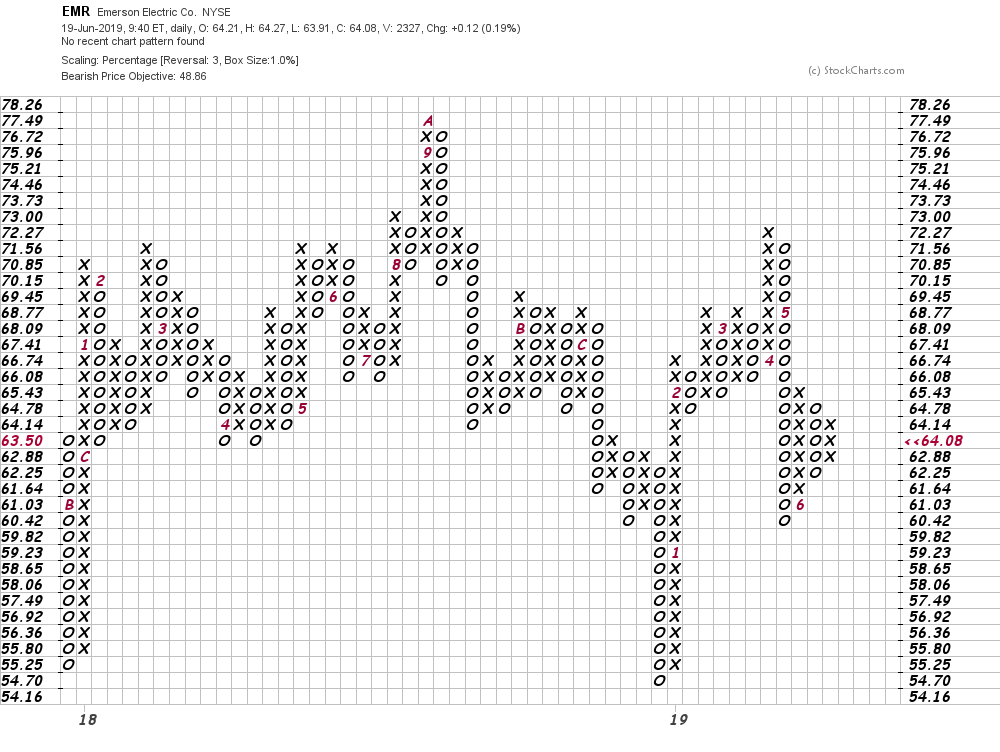 Bottom line strategy: Trade deal or no trade deal, the charts of EMR suggest lower prices could be seen in the weeks ahead. Steer clear of the long side.
Get an email alert each time I write an article for Real Money. Click the "+Follow" next to my byline to this article.
TAGS: Investing | Stocks | Technical Analysis | Industrial Goods | Industrials | Real Money