Emerson Electric Inc. (EMR) suffered a decline in October but has been trying to stabilize and restart the upside in November. Let's check out the latest charts and indicators to see if we should be long, short or flat ahead of this weekend and any year-end moves by Emerson, which earns a mention in Jim Cramer's opening column here on Friday.

In this daily bar chart of EMR, below, we can see a mixed picture with respect to the indicators. Prices are below the declining 50-day, and this shorter indicator is crossing below the slower-to-react 200-day moving average line, which is also bearish. While prices declined in October, the daily On-Balance-Volume (OBV) line softened and then turned sideways in November as prices chopped sideways. The trend-following Moving Average Convergence Divergence (MACD) oscillator has been improving erratically in November after a cover-shorts buy signal. The MACD oscillator is still below the zero line in sell territory.

In this second daily chart of EMR, below, we can see a bullish divergence between the higher lows of price momentum in November and the equal lows in price. This is not a large pattern, but is the right setup.

In this weekly bar chart of EMR, below, we can see that prices have been below the zero line for the past six weeks. Prices have been holding around the $65 support area while the 40-week moving average points down. The weekly OBV line diverged from the new highs in September and October but it has not turned lower, telling us that sellers are more aggressive. The MACD oscillator on this time frame is crossing below the zero line for an outright sell signal.

In this Point and Figure chart of EMR, below, we have an interesting juncture. A modest downside price target of $62.87 is projected, but a rally to $70.85 will be a triple top breakout. A decline to $64.78 would be bearish. 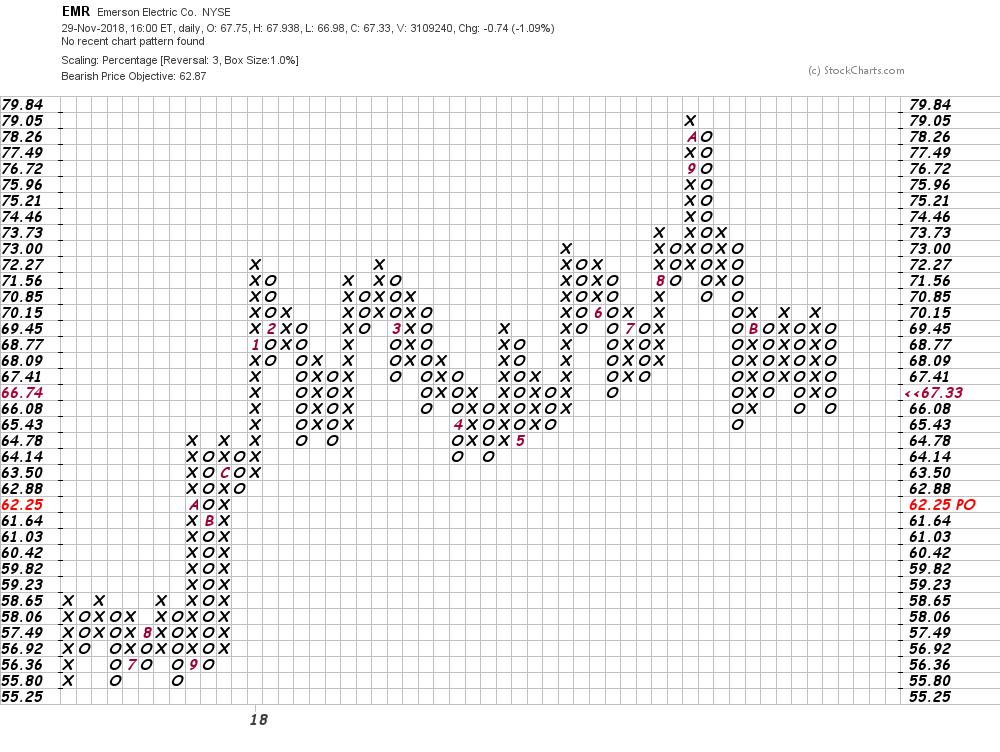 Bottom line strategy: EMR has held the $65 area several times since February. Unless things unravel on the trade front, I would look for EMR to continue to hold and eventually try the upside again. Meanwhile, I would keep positions small.

Get an email alert each time I write an article for Real Money. Click the "+Follow" next to my byline to this article.
TAGS: Investing | Stocks | Technology | Industrial Goods | Industrials | Manufacturing