Kramer said his team has done an amazing job over the past year, ramping up manufacturing for both the Johnson & Johnson (JNJ) and AstraZeneca (AZN) vaccines from zero to almost 100 million doses a month. Emergent's manufacturing lines are now running 24/7, he said, and the company is on track for one billion Covid vaccine doses annually.

Kramer said while some investors believe the company's growth will slow once the world is vaccinated for Covid, Emergent has many other businesses that are ramping up nicely to pick up any slack.

Let's check if the charts are ramping up, too.

We last looked at EBS on Jan. 12 and wrote at that time, "In this updated daily Point and Figure chart of EBS, below, we used a traditional even-dollar scaling method. Here, a trade at $104 will be a double-top breakout and could open the way to further gains. A price target of $128 is being projected." Let's check again.

In this updated daily bar chart of EBS, below, we can see that prices got very close to our $128 target by the middle of February. Prices quickly turned lower. EBS is now trading below the cresting 50-day moving average line and just below the rising 200-day moving average line. The daily On-Balance-Volume (OBV) line shows strength from December to the middle of February. The OBV line has turned weak/bearish in the past three weeks and tells us that sellers of EBS are now more aggressive. The Moving Average Convergence Divergence (MACD) oscillator quickly turned lower in the middle of February and is now below the zero line for an outright sell signal.

In this weekly bar chart of EBS, below, we see a weak picture. Prices are below the 40-week moving average line. The weekly OBV has started to turn lower and the MACD oscillator is crossing to the downside for a take profit sell signal.

In this daily Point and Figure chart of EBS, below, we can see that the software is projecting an upside price target in the $120 area. The chart also shows that a trade at $92.69 could weaken the picture. 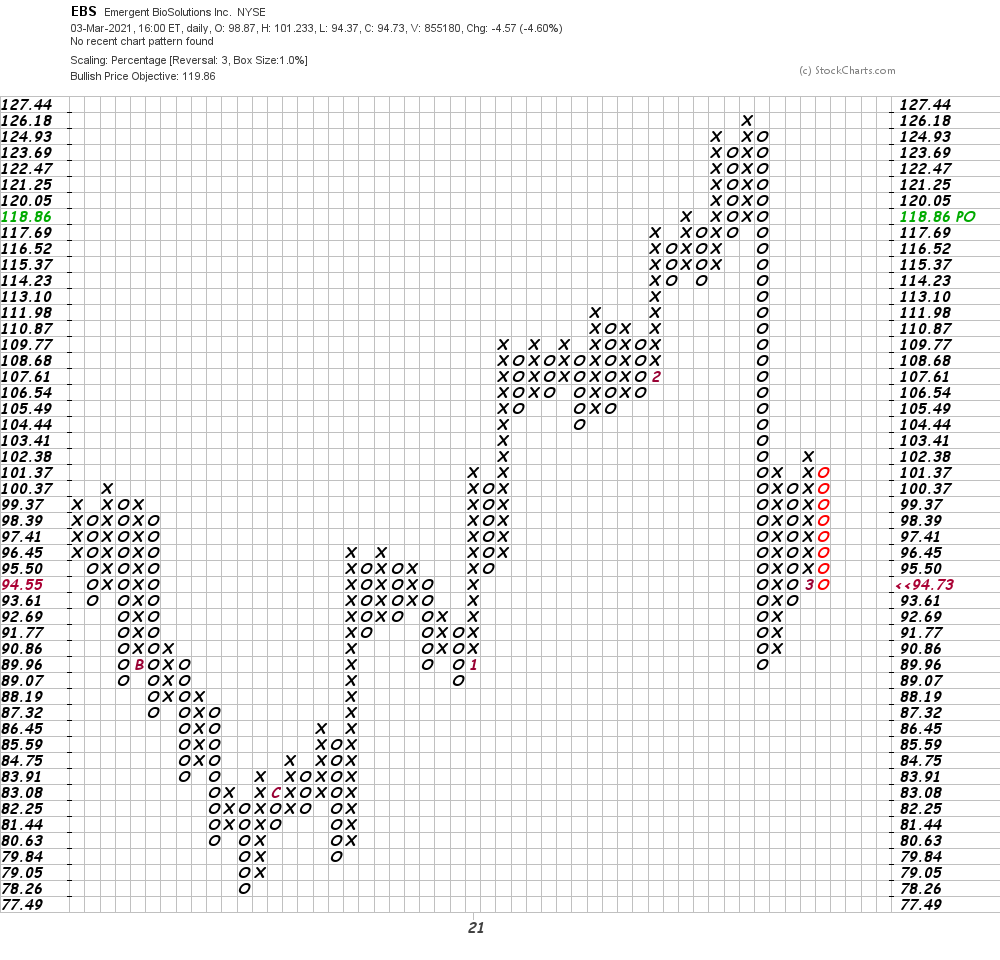 In this second Point and Figure chart of EBS, below, we used weekly price data. Here the software is projecting a downside price target in the $54 area.

Bottom line strategy: Despite the positive fundamental story EBS looks like it will retest the December/January lows. A break of the support around $80 will likely precipitate further declines. Sell any remaining longs.

Get an email alert each time I write an article for Real Money. Click the "+Follow" next to my byline to this article.
TAGS: Investing | Stocks | Technical Analysis | Healthcare | Life Sciences | Pharmaceuticals | Mad Money | Executive Interview | Real Money | Coronavirus