In his second "Executive Decision" segment of Thursday's "Mad Money" program, Jim Cramer sat down with Dave Ricks, chairman and CEO of Eli Lilly & Co. (LLY) . The pharmaceutical giant completed a bullish investor day that included a 15% dividend boost. Ricks said the dividend hike is a sign of management's confidence in the growth of their company going forward. "It's a great time to be investing in science," he said, and Lilly will be introducing 10 big new drugs over the next five years. The fundamentals sound robust, but we know that the marketplace is a discounting mechanism, so a look at the charts is needed.

In this daily bar chart of LLY, below, we can see that Lilly performed well in 2018 and it held up nicely in recent months when the rest of the stock market was heading south. Prices have been finding support or buying interest around $105 since August, but things maybe shifting. LLY is trading below the now-bearish 50-day moving average line. The slower-to-react 200-day line is still rising and intersects down around $95. The daily On-Balance-Volume (OBV) line rose from February to early December but has been inching lower this month. A declining OBV line is a sign that sellers of LLY have become more aggressive.

In the bottom panel is the 12-day price momentum study. Momentum has been slowing since early August, and when compared to the pace of LLY making new highs gives us a bearish divergence. That's a fancy way of saying that the pace of the rally has slowed over the past four to five months. A bearish divergence can foreshadow a downward reaction.

In this weekly bar chart of LLY, below, we have a mixed picture. Prices are well above the rising 40-week moving average line, but we know that is a lagging indicator. The weekly OBV line shows a decline this month and the Moving Average Convergence Divergence (MACD) oscillator has crossed to the downside for a weekly take-profits sell signal.

In this Point and Figure chart of LLY, below, we can see a downside price target of $97 being projected. A decline to $97 doesn't sound like the end of the world, except that chart support is not seen in that area and a deeper decline could unfold in the weeks ahead. 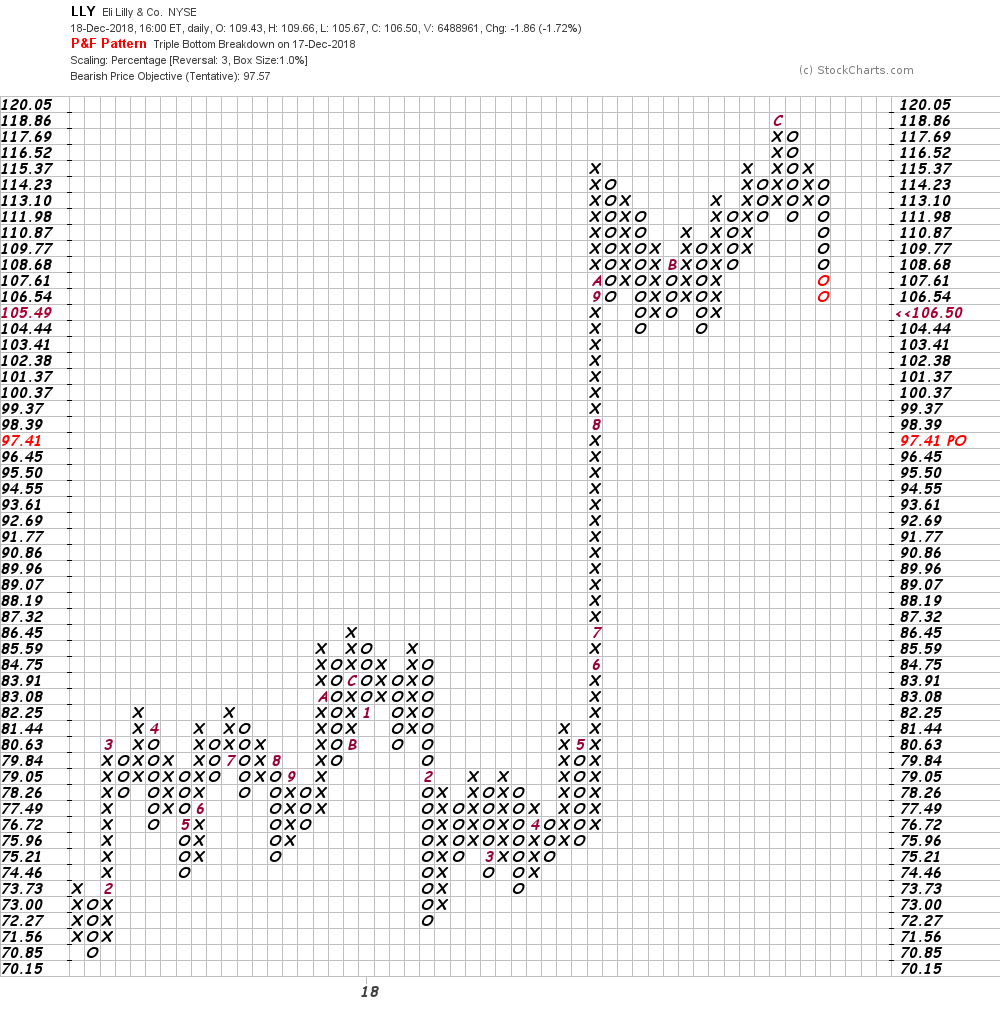 Bottom line strategy: The fundamentals for LLY sound good but they could be discounted already, especially in the current market environment. A close below $105 on LLY would be bearish, so investors and traders should take appropriate action.

Get an email alert each time I write an article for Real Money. Click the "+Follow" next to my byline to this article.
TAGS: Investing | Stocks | Technical Analysis | Healthcare | Pharmaceuticals | Real Money