Electronic Arts (EA) will attempt to court enthusiasm when it reports its fiscal fourth quarter earnings after Tuesday market close, following a string of bad stock implications on its recent earnings releases, but there are a several major problems that need addressing.

Shares of the Redwood City, California-based entertainment company are sliding in morning trading as questions remain on the company's recovery from a second half 2018 troubles that saw shares lose nearly 50% of their value from last year's peak.

On the surface, the Street expects earnings per share to come in at $0.97, while revenue is estimated at $1.2 billion. Both indicate significant year over year declines after a slew of earnings revisions to the downside.

The tempered outlook is encouraging many analysts who believe the lowered bar will be much easier to clear, with a strong pipeline for the next year to curry favor with the forward-focused market.

"EA would like to forget that much of FY19 ever happened and, while there were many missteps in the year, FIFA (combined with FUT) remains a growing franchise and FY20 should be a year where EA returns to growth due to a more favorable pipeline," Piper Jaffray analyst Michael Olson wrote in an earnings preview note. "In addition to the typical slate of sports titles in the year, we also expect Need for Speed and Plants vs. Zombies to be incremental in FY20, while Star Wars Jedi: Fallen Order will attempt to comp the FY19 Battlefield V release."

He maintained his "Overweight" rating, alongside the analyst consensus, with a $114 price target. The Street consensus price target stands at just over $104 per share, suggesting a modest upside.

One of the main questions that EA will need to address is the staying power of its new Fortnite competitor Apex Legends.

In order to battle back from a disappointing earnings that sent shares sliding double digits following its third quarter release, EA released the new battle royale-style game to much initial fanfare.

In the two weeks following the earnings slide, which was followed up by the release of the new game, shares surged over 30% as gamers lauded the release and popular streamers on Amazon's (AMZN) Twitch platform picked up the title.

"The immediate success of the surprise launch of Apex Legends from EA's Respawn might end up being more important to the stock over the long term than guidance for a lackluster 4Q," said BMO Capital Markets Gerrick Johnson at the time. "EA now has a solid entry into the battle royale genre that is generating a lot of buzz and dominating Twitch viewership since release."

However, digging into the Twitch stats since release, the game has fallen far behind Fortnite in viewership despite its novel status. The key question will surround the staying power of the title as it acts as a key placeholder as the 2020 pipeline develops. 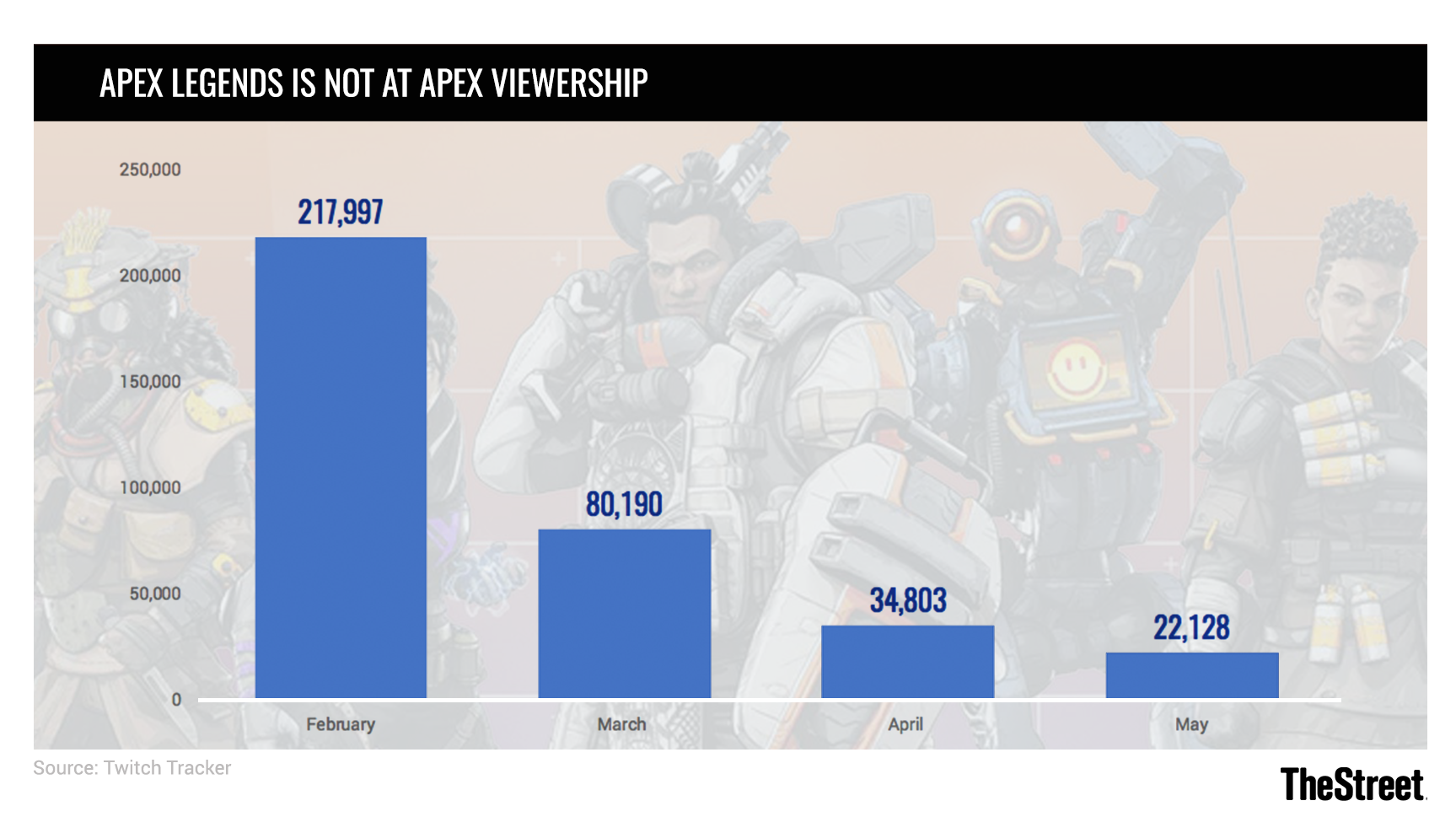 "As long as Respawn continues to update Apex with incremental content to keep the current registered user base (last announced at over 50 million) engaged, this game has the potential to contribute in a way beyond the pure financial considerations - which in our view is the optionality for management to delay new titles to add more polish," Credit Suisse analyst Stephen Ju said. "Starting with Star Wars Battlefront in 2015, and continuing with Mass Effect Andromeda and Battlefront 2 in 2017, as well as Battlefield V in 2018 and Anthem in 2019, we feel that every single one of these titles could have performed better if they had spent more time under development."

The key will be holding the interest of gamers, and monetizing their play time, as development enters final stages. 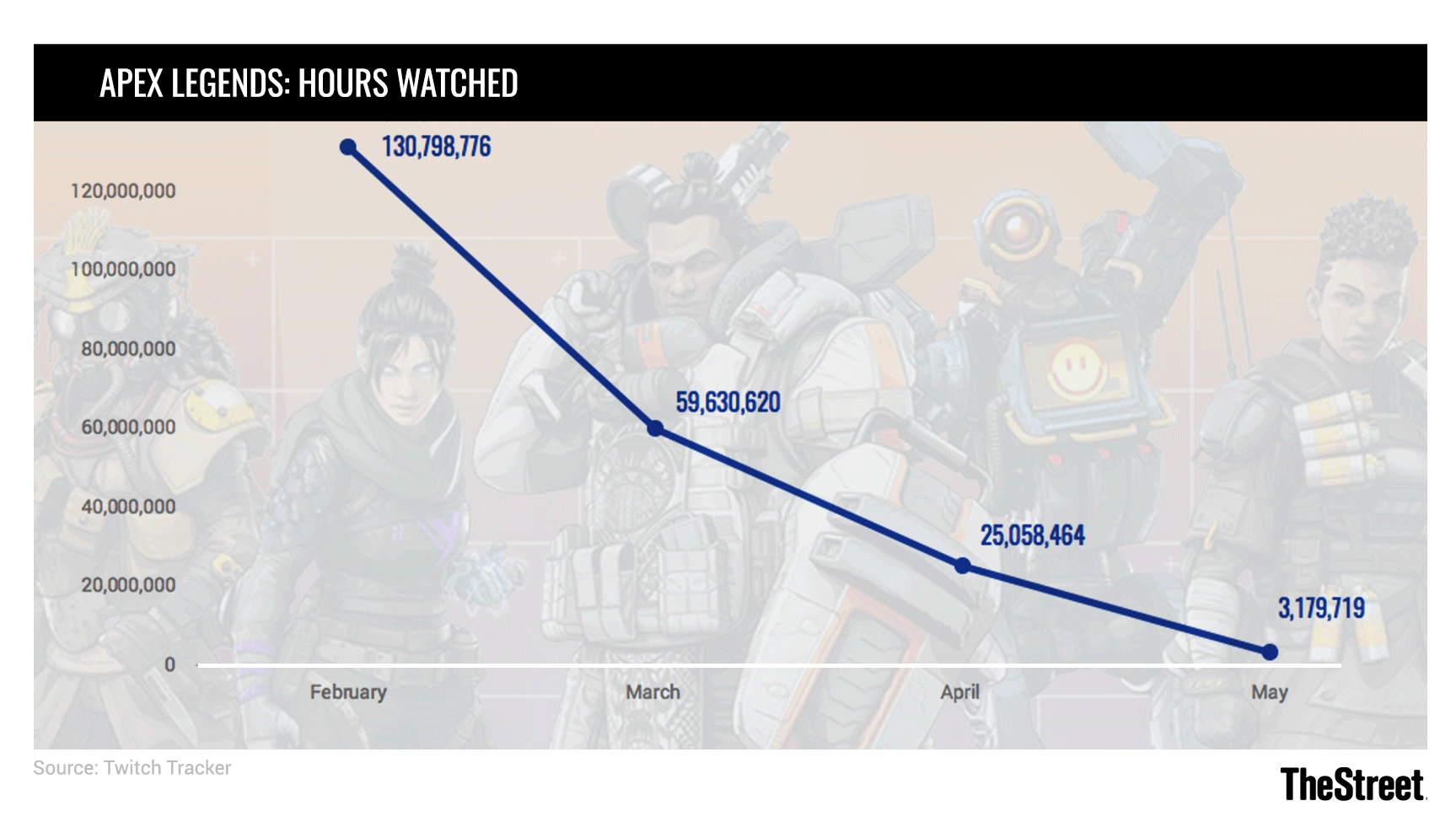 "The contribution of Apex Legends will become evident by looking at EA's Live Services revenue, which was expected to be roughly flat y-o-y at $679 million before contribution from Apex Legends," Ju explained. "Any Live Services revenue growth above $20 million (accounting for EA's conservatism) will likely be largely attributable to Apex Legends, with some small year-over-year growth for FIFA Ultimate Team following its best quarter ever in [the third fiscal quarter]."

It is also worth noting that Apex Legends could serve as a key entry point into esports, a growth industry that EA has largely missed out on outside of its flagship FIFA and Madden titles.

The Apex Legends game will also be used as a crutch to prop up weakness in sales form the company's Anthem action game offering, and analysts are optimistic on this thesis.

However, the issues with Anthem are significant.

The game was largely panned by critics and has been plagued by software patches and a dearth of engagement on major streaming platforms.

Some gamers even complained that the games myriad of problems have broken consoles developed by Microsoft (MSFT) (Xbox) and Sony (SNE) (Playstation).

The issues were apparently recognized by development teams and the rushed release of the apparently unfinished product created turmoil within the ranks of EA partner BioWare that led to the departure of dozens of developers.

Considering the BioWare team has been behind some of EA's most popular titles, like Star Wars: The Old Republic, Mass Effect, and Dragon Age, the loss of key talent from the developer could be a significant long-term issue.

The Pipeline is Pivotal

Of course, as Apex Legends is largely unmodeled, the pipeline that will be the key to sustaining share growth and hitting forward looking estimates.

While the company does not have an immediate releases on the horizon, the full fiscal years for 2020 and 2021 have a number of titles that have typically been cash cows.

The first major release will be Madden NFL 20, a traditional standby game for investors that consistently sells hundreds of millions of copies. In just the first week of release in August 2018, Madden 19 sold over 130 million copies across consoles. Clearly, this release later in the year is a prescient data point for catalyst-focused investors.

The company will also be releasing new installments in its NHL, NBA, and FIFA franchises in the same quarter. FIFA is currently the best selling sports video game franchise of all time and the fifth best selling franchise overall.

It is reasonable to assume continued success for such a consistent performer, something that helps make EA's revenue much more predictable.

For the December-ended quarter, the company will branch outside of sports with releases of Star Wars Jedi: Fallen Order and a sequel to its bestselling mobile game Plants vs. Zombies.

The fact that the new Star Wars-focused game will coincide with the release of Disney's (DIS) Star Wars Episode IX: The Rise of Skywalker should be additive to the former's release as well.

The question the market will likely have about the release is its rejection of the much-hated "pay to win" business model that has overtaken the video game industry in recent years as Bethesda, Take Two Interactive (TTWO) , and Activision Blizzard (ATVI) embrace the margin-expanding model.

No microtransactions. No loot boxes. And no, we won't be adding them. A single-player Star Wars story for those of you who are ready to become a Jedi. https://t.co/kTheWVBjJc

EA has been a key participant in this business model in the past, so more guidance on how this game will be modeled under this system will be one to watch.

Looking ahead to 2021, the company will be adding a sequel to its critical successes in its Battlefield first person shooter franchise and Need for Speed racing series.

It is unclear if there will be any information offered on the still far-off releases, but for longer term investors, any color will certainly be helpful.

The earnings release is due out after market close on Tuesday, with an earnings call to follow at 5 p.m. ET. Tune in here.

Get an email alert each time I write an article for Real Money. Click the "+Follow" next to my byline to this article.
TAGS: Investing | Stocks | Digital Entertainment | Software & Services | Technology | Video Games | Analyst Actions | Stock of the Day | eSports | Earnings Preview