What did you do? Did you watch the debate? The football game? Maybe you went to sleep before either came to a conclusion.

I did watch a lot of the debate. It was far more civil than the first debate between these two candidates. That in itself was a positive. The football game was a good game played by bad teams. Speaking just for me, I watched more of the first, less of the second, while definitely guilty of hitting the rack prior to the completion of either.

The fact is that at last count the number of registered voters who have already cast ballots is more than 45 million. The number of those truly undecided this late in the game is probably extremely minute. While the debate did hold my interest, I am not sure that the needle, wherever it may lean, can be moved at this point. I do know that I will be glad to see this election grow smaller in the rear view mirror. It could take a week. As long as there is a winner, and as long as there is a loser, and as long as both are gracious in the result, we can move on. If one candidate leads on Nov. 3 and then ultimately loses, half a nation will feel cheated. The loser, more than the winner, is going to need to show leadership.

Equity markets seemed to barely notice that there was a debate, either ahead of the event or in overnight markets afterward. The Thursday session was notably different in that there was no late-day selloff. That trend finally broke. Large-cap indices moved slightly higher on lackluster trading volume, while small- to mid-cap stocks showed considerably more strength. Instead of hitting the "sell" button 60 to 90 minutes ahead of the closing bell, traders hit the market with a "buy" program about 90 minutes after the opening bell in response to positive comments made by House Speaker Nancy Pelosi that may have signaled progress (yet again) on reaching a large fiscal support package.

Interestingly, I think we take a look at this new phenomenon. Instead of closing toward the bottom of the day's range as the Nasdaq Composite had done for four consecutive days, we now see two "up" days (ever so slight) in the past three while the index appears to have closed at nearly the same level now for four consecutive days, all while also opening at almost that same spot for the same past three. How odd is this?

Not just how odd is that. Rather, where would the markets be without the financials, suddenly? Both the S&P 500 and Dow Industrials out-performed the Nasdaq Composite, while the Nasdaq 100, the only major index that completely excludes the banks and financial stocks, actually closed in the red on Thursday.

We have spoken of this new focus on the long end of the Treasury yield curve this week. The market's emphasis was clear on Thursday. We know a few things. We know that markets are ready to keep selling the long end of the curve if a large stimulus deal seems apparent. Call it hopes for improved growth, inflationary expectations, or a plain old response to already increased supply that will only likely expand.

The deal is this simple. When investors sell longer-term U.S. Treasury debt (10-year notes) like this...

... and the Fed anchors short-term rates, the spread between short- and long-term yields (3-month/10-year) does this...

Then, knowing that investors value banking stocks through the prism of net interest margin more than through anything else, bank stocks do this....

.... and regional banks that have less ability to lean on investment banking and trading do that even more so....

This is where, all of a sudden, your bull market is. The industrials have been hot on and off of late. The airlines are dependent upon fiscal support. Aerospace and Defense, though not in nearly so deep a hole, is just as reliant upon policy. The rails are going to need organic economic growth, which will be difficult to predict. You all know (if you read me much) that it has been a long time since I have been bullish on traditional banking. In fact, I spent the whole summer with literally zero single-stock exposure to the entire industry.

Only going into earnings did I even get long some JPMorgan Chase (JPM) as a "best in class" (my opinion) play. I think I may need to add a regional bank to my most actively traded portfolio. One name that reported earlier this week and broke out on Thursday while still cheap enough for retail investors to get involved (I am not involved as of yet) would be Regions Financial (RF) , operating in 15 southern and midwestern states. It's worth taking a look at, anyway.

Identifying trends is more than half the battle. Are higher yields at the long end Biden-proof? Trump-proof? Both will borrow heavily if they can get it past the legislature. How steep a yield curve will the Fed tolerate? If I knew that for sure, I'd be famous. Only kidding. Actually, you'd never hear from me again. Only kidding again. I'd buy a major league ball club and make myself the centerfielder.

At least we think so. Thursday morning saw a nice surprise on the low side as far as weekly Initial Jobless Claims are concerned. A seasonally adjusted 787,000 filed for new state-level unemployment benefits, well below expectations. Another (two-week lag) 345,000 filed for Pandemic Unemployment Assistance. This is a 13-week federal program meant to aid freelancers, sole proprietors, "gig" workers and all those who do lose jobs where they were not quite considered to be employees in the traditional sense.

Continuing Claims also dropped quite considerably. Deciphering how many laborers have been called back by employers and just how many have rolled off the back end of their state's benefits programs is difficult to ascertain. Then there's the state of California, which just seems too large to do anything right, or possibly count anything accurately.

You all saw the disappointing PMI surveys across the European Union on Friday morning. These sagging numbers are due to the incredibly rapid increase in the spread of this evil virus across the continent. No, we are not special. Is the U.S. handling the pandemic better than Europe? Probably not. Europe is three weeks to a month ahead of North America seasonally, and perhaps in (economically) damaging mitigation efforts. I remember talking to a friend in Milan last spring. She said simply (paraphrasing), "You people have no idea what's about to hit you."

Gilead Sciences' (GILD) Remdesivir became the first antiviral therapeutic approved by the Food and Drug Administration (FDA) for the treatment of hospitalized Covid-19 patients. Remdesivir received an Emergency Use Authorization from the FDA last May. Oddly, this comes a day after the beleaguered World Health Organization found that the drug had no impact on mortality, but just weeks after the New England Journal of Medicine showed the drug to be superior to placebo in shortening recovery times. Follow the science?

Take it from someone who suffered this virus and the never-ending period of recovery. The scientists are not a whole. Many disagree on even the basics, and many have also changed their minds on Covid-related matters several times over. Not really their fault. There has been nothing to study up on. That's what "novel" means. There is no playbook. No way to actually follow the science. That argument is made strictly to gain political advantage. There are few actual experts and six to eight months ago, there were none. It's extremely frustrating on the patient's end.

Charts of the Day: 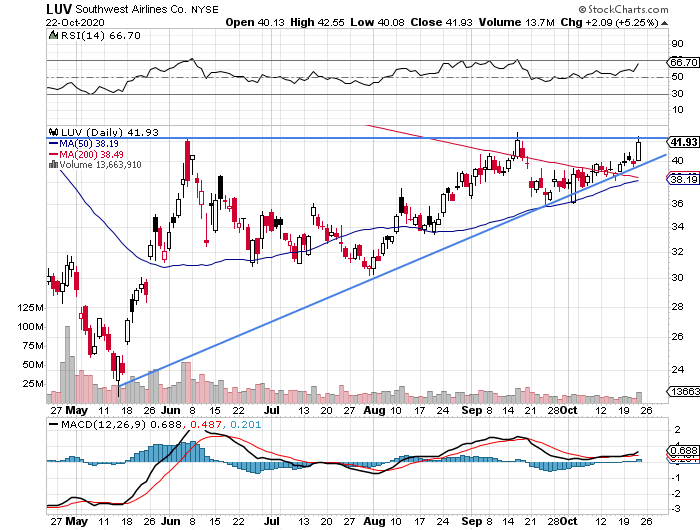 Remember when I wrote to you and said that if I had to own one airline it would be Southwest Airlines (LUV) ? Well, I followed up on my own advice, and so far so good. What you see here is an ascending triangle, which is usually a bullish pattern. Basically, an ascending triangle is a series of higher lows that run beneath a level area of resistance until the two lines meet and hopefully provide an (upwardly) explosive move. My price target is $51.

Sarge, doesn't the whole industry look like that? Not exactly. LUV has a better-looking chart. Look at the Dow Jones U.S. Airlines Index over the same period. 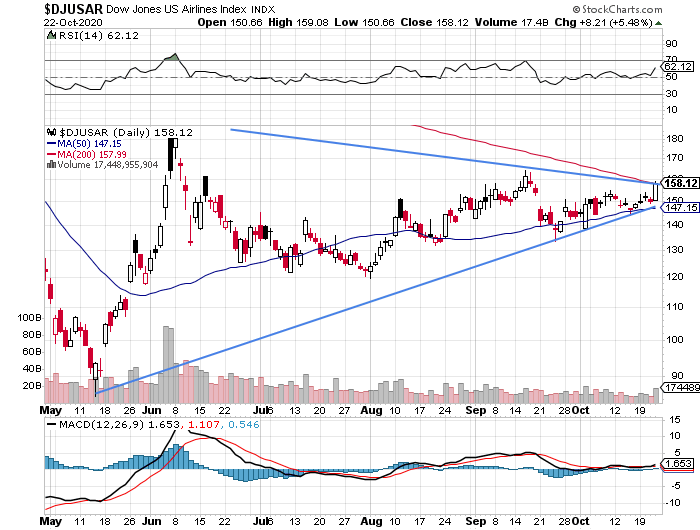 Oh, you still have a closing triangle. Just that when a series of higher lows couples up with a series of lower highs, directionally, the explosive move that we look for is less predictable.