"Here is that rainbow I've been praying for

It's gonna be a bright (bright)

The wonderful thing about hindsight is that it is perfect. "Of course"... the mind shouts. Instinct kicks in. Suddenly, a confidence from within builds. It happens to everyone at some point. Maybe it happened to you in a college calculus course. Maybe it happened a couple of weeks after you got off of that bus under cover of darkness at Parris Island, or Fort Benning, or up at Great Lakes. Or maybe it just happened. You realized at some point that you could. You realized at some point that adversity elicits a response from deep inside of you that after a period of trial and error ends up looking a lot like self-confidence.

It is then that you will understand, probably for the rest of your life, that as long as one constantly works at working hard, that as long as one also works at being smart (because everyone can become smarter than they were), then yes, you will ultimately see a big picture. You will see things more clearly. Even if late to act once or twice, experience is built. Then adaptability, even agility. No, the breaks will never always go your or my way. That said, we'll be quicker to understand what happened in front of us, or even to our peripheral. With hindsight and instinct come adaptability and agility. With adaptability and agility comes the consistency that builds durability. That, my friends, is the goal in this or in any other facet of life. Durability.

Today is Thursday. Your guy may be well on his way to victory or defeat. The Senate may have broken your way, or not. You and I both woke up on this side of the dirt on Thursday morning. One and Oh, baby. Let's make use of both hindsight and our own instincts. Let's adapt, so that we may be agile. Let's mindfully stay consistent. With enough humility to be grateful, may we also be durable. God bless.

Tuesday's election is being painted as "razor's edge" close. Remember, as enough in the media move to illustrate a heightened level of uncertainty, that news, breaking news, or even sensational news is what sells newspapers and their modern equivalents.

I think it is quite clear that former Vice President Joe Biden has moved much closer, and now has a multitude of pathways toward the 270 electoral votes required to claim the White House. President Trump still has a path, but to me, it looks like he has but one path, with almost no room for error at this point. I have written many times that financial markets were fine with either of these men in the Oval Office.

We also know that there was nothing close to a "blue wave." Voters clearly rejected one-party rule, as it has become near certain that not only will the Senate remain red, but that the House minority has become stronger, the House majority weaker going into 2021. These two near certainties are why markets rallied hard on Wednesday, why, so far, they have been in rally mode all week.

One one level, markets are responding to near certainty. Despite the fact that in some states this election does appear to be moving to the courts, there is not the widespread belief among traders, at least not yet, that these challenges move mountains. On the other level, market behavior can be easily explained away as stocks love split government, or gridlock, but it is much more than that. While a split legislature will probably mean a smaller fiscal support/stimulus package (you did see the long end of the yield curve melt on Wednesday), it also becomes clear that capital gains taxes are likely going nowhere. Algorithms priced higher corporate and capital gains taxes out of equity prices last week, and have had to quickly price them back in this week. Easy peasy.

No problem. Tech stocks, Internet stocks, and basically all "growth" type names have spent two months moving sideways to lower, while more cyclical stocks gained favor. Industrials led by Transports. Materials, Financials, and small to mid-caps all found bids for a number of weeks, as managers took profits where they were.

Suddenly, the U.S. Treasury cut estimates for year-end borrowing nearly in half, as efforts to negotiate further stimulus failed ahead of the election. Now, it would appear that further borrowing will not be of the size that was once spoken of. Hence, longer-dated Treasury yields collapsed on Wednesday as did highly focused on short-term/long-term spreads. That's a net-interest margin killer for banks.

Take a look at the U.S. 3-month/ 10-year yield spread. Tells you exactly why they're selling those banks.

I always enjoyed Chutes and Ladders as a kid. Not so much as an adult. What's working? Well, it's not all gummy bears and candy canes. Let's dig in.

Market breadth while very solid on Wednesday, was not quite as aggressive as the headline large-cap indices would have casual observers believe. Seven of 11 sectors shaded green for the day. Three of them, really dark green.

Health Care stocks rocked, led by the insurers. We're talking Cigna (CI) , Anthem (ANTM) , UnitedHealth (UNH) and Humana (HUM) . Simple. The Affordable Care Act (ObamaCare) had been under threat, and now likely what remains of that law will be safe from further erosion. Nobody benefits from the ACA more than the big insurance companies and hospitals. This had to be priced back in.

Also benefiting greatly on Wednesday were internet stocks, as with a division at the legislative level, there could possibly be less focus, at least immediately, on the regulatory matters that had been making recent headlines. Facebook (FB) and Alphabet (GOOGL) soared.

Lastly, there is the triple-headed monster: Information Technology. Capital quickly moved back into software as the virus spread accelerates and there is now little chance of capital gains being taxed as ordinary income. Semiconductors and Hardware stocks both got not just a lift on the capital gains story, but also on the expectation that a President Biden could ease trade tensions globally, yes, but especially with China. Leaders across these two groups were whom you might expect. Advanced Micro Devices (AMD) , and Nvidia (NVDA) led the semis, while Apple (AAPL) and Roku (ROKU) led hardware.

To be honest, given the composition of the types of stocks domiciled at New York's two primary equity exchanges, performance was varied on Wednesday. Winners beat losers, but not by a wide margin at the New York Stock Exchange as declining volume actually topped advancing volume. Winners beat losers at the Nasdaq Market Site as well, but by less than 4 to 3. Advancing volume did decisively beat declining volume up at Times Square. Trading volume in aggregate was elevated at both exchanges.

The most important market takeaway for right now is that both the Nasdaq Composite and the S&P 500 have filled their respective gaps and retaken their 50-day simple moving averages.

Only one negative: Now we have a new gap that may have to fill. Otherwise this is a very positive-looking chart.

There was a time when on "Fed Day," trading would almost completely stop on the NYSE trading floor early in the afternoon. A "one line" headline would print out in green on a black Quotron screen, and absolute mayhem would ensue. We hated those days. Even with three-minute windows for trade execution, we could not keep up. Nobody read the statement. If there was a press conference, nobody watched. We could read the news on the way to work the next day. The only thing that mattered was keeping up with order flow. You failed to do that, and it did not matter how "good" you were, the big mutual funds, the big hedge funds, and those options trading lunatics in Philadelphia were your clients. All of them were angry most of the time, and every other colored jacket on that trading floor wanted to replace you in their eyes because they paid the freight.

This afternoon might just be the least spoken about, and least focused upon FOMC policy meeting result that I can remember in quite some time. No changes are expected for short-term interest rates, nor for the methodical and probably necessary debasement of the currency. Fed Chair Jerome Powell may wander into pushing out average maturities. He will promise to better maintain lines of liquidity where there has been kinks. What can he do really? He will blame Congress for not crossing the goal line on fiscal policy. He will not be wrong if he goes there. Congress has failed the people in a time of crisis.

Powell has worked very well with Treasury Secretary Steven Mnuchin who could be on his way out. Heck, Powell could be on his way out, as President Trump did replace a highly regarded Janet Yellen. That said, I would not expect a potential Biden Administration to even think like that until well after the pandemic subsides.

In short, the Fed has no choice right now but to keep doing what it's doing monetarily, and to do no more until more is known about the fiscal environment. I think Powell sits on his hands out of necessity until 2021, unless necessity makes the next move.

For those following along, I did take profits on Wednesday afternoon on my Amazon (AMZN) trade entered last week. One of the best short-term trades of my career. Almost $290 in three days. I had become overexposed and was not about to let that one melt away.

I have returned the name to its core position size on my book (my second largest position in terms of weighting), remain invested, and remain bullish.

Chart Of The Day 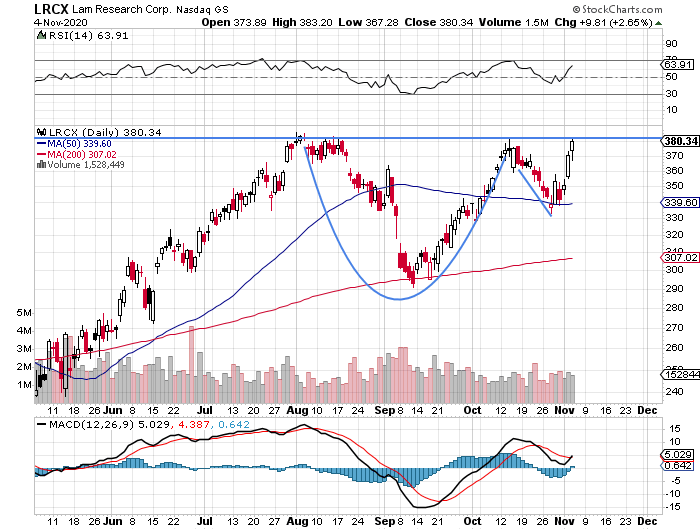 Talk about potentially warming up the trade relationship with China. The chip equipment companies would be key beneficiaries. China only produces about 16% of its own tech sector needs. This is the one business where China needs U.S. manufacturers.

The setup here is obvious. Take a look for yourselves. While Lam Research (LRCX) is an old Sarge fave, key competitors would be Applied Materials (AMAT) and KLA Corp. (KLAC) . All three are showing the same potential cup with handle pattern setup.