Every day, it seems that as I recap what traders have just experienced, the one commonality has been the light trading volume. Oh, yes, my friends, equities remain for the most part in what most would define as a confirmed uptrend. Nearly all professionals have been reluctant to add at the top of the chart. Nearly all professionals have been reluctant to take profits or get short in front of the European Central Bank (ECB) and the Federal Reserve. The action, what action there is, has been company-specific, and the good news for you and I is that starting on Tuesday morning -- yes today -- the company-specific news flow is going to make like a volcano and spew information.

What does that mean? That simply means that the aggressive buying was concentrated among a minority of names. Those names were primarily semiconductor manufacturers and those that provide parts and equipment to those manufacturers. A quick glance at the Technology Select Sector SPDR ETF (XLK) that experienced a 1.2% rise itself shows that the fund's individual leadership came from Applied Materials Inc. (AMAT) , Lam Research Corp. (LRCX) and KLA Corp. (KLAC) from the equipment side, as well as Micron Technology Inc. (MU) and Western Digital Corp. (WDC) from the storage side.

A little FYI: All five of these names are experiencing what look like breakouts. ETF flows tend to do that, not to mention trade tensions that seem to be easing a little, as well as high-profile upgrades. My message here would be that, fundamentals aside, MU, KLAC, and AMAT at least technically have all advanced past pivot, while the rallies in LRCX, and WDC appear to be less mature and may have more upside.

Fundamantally, I like WDC less than the rest. For those who try to use a mix of fundamental analysis and technicals, I believe Lam Research is the best pick among these five. I am a little biased as this stock has made me some nice dough in the past. However, I wake up on July 23 flat the name.

If I were long this stock, my target price would likely be above $250. The shares closed at 207.21 on Monday. The short-term level is just below $210. That level must be taken and held. If I am right about $250, I can wait to see that move first given that I am already late. BTW, Jim Cramer did give you this name, which is part of Jim's Action Alerts PLUS charitable trust, very close to the bottom of the recent pattern. The short-term danger would be that the stock's Relative Strength flashes a warning of potentially being overbought as the shares approach pivot. Take a look for yourself. 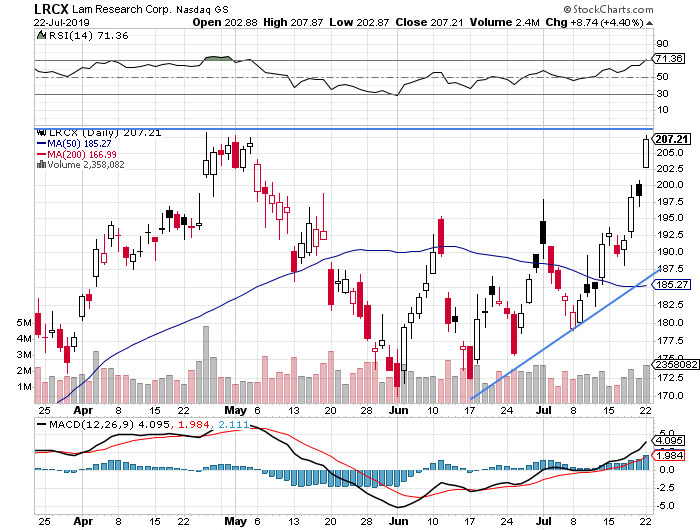 Hence, it is why, as someone who did miss the low-hanging fruit for this name, I must wait for a signal that I trust to allocate new capital. Bad news on China trade, and all bets are off. All trades here, for me at least, will be executed incrementally.

Sticking with the tech space, and with the semis, kind of... news broke late on Monday that Apple Inc. (AAPL) might just be in advanced talks to buy the smartphone modem chip business of Intel Corp. (INTC) . How exciting is this for both firms, with Intel set to report on Thursday evening and Apple ready to go next week?

It's no secret that for Intel, the smartphone chip business line had been a driver... a driver of losses that itself led the firm to decide against further pursuit of development of chips meant for advanced 5-G mobile technology. It also makes sense that Apple, still with $113 billion in cash as of the end of the most recent reporting season, might look to spend some of that dough to bring on an expensive (not to mention talented) staff and a portfolio of patents in-house for a cool $1 billion-plus with cash that otherwise has been spent on dividends and share repurchases. (Apple is another holding of Jim Cramer's Action Alerts PLUS charitable trust.)

I like the move for both firms. The only one I see potentially getting hurt here is Qualcomm Inc. (QCOM) . Qualcomm ended up as the sole provider of the cell phone modems to Apple as part of the conclusion to the legal battle between those two firms. Where this leaves that resolution, I don't know, but QCOM has given back Monday's rally overnight.

My thoughts? I am long both AAPL and INTC. Katy Huberty was good to the "long AAPL" crowd on Monday. Intel is a name that I got long almost accidentally several months ago as a result of one of my "raising capital by selling naked puts" schemes. Yes, some of my strategies carry risk. Risk that can hurt, or at least inconvenience. In this case, inconvenience, as that position has now been in the green for more than a week.

The fact is that I prefer Advanced Micro Devices Inc. (AMD) and Nvidia Corp. (NVDA) over INTC, and I prefer Lisa Su and Jensen Huang over Robert Swan. I really don't need to be long all three, which I am.

Intel pays a dividend, which is nice, but not enough to tip the scales. I'll probably hang on until I see actual smoke from the chimney, but if Lam Research takes that $210 level, it would be nice to not expend dry powder, and Intel has turned defeat into victory, allowing the freedom that my ego needs to act. No. Never mind, that's not ego, that's all id, baby. Primitive. Aggressive. Goodbye, Intel.

Speaking of making the green grass grow, it appears that our beloved aerospace and defense industry names will not need to worry about any coming period of forced austerity. Treasury Secretary Steven Mnuchin and Speaker of the House Nancy Pelosi have put together a deal that leadership both at the White House and among key Democrats have apparently agreed to on raising the debt ceiling and significantly increasing federal spending.

The result? No short-term threat of default. The deal raises next fiscal year by a rough $50 billion over this year's level and calls for $2.7 trillion in total spending over the next two years while suspending the debt ceiling until 2021.

Why would both parties see 2021 as optimal? Simply to avoid any blame ahead of a national election. Why do you think offsetting budget cuts will be smaller than previously asked for? For now, go about your business. The end of global fiat is not today. Today, we use this to our advantage. The day of reckoning is, however, out there, somewhere. It hunts.

What am I watching for? Impact from Turkey on the aeronautics unit, of which the F-35 stealth fighter is part of, and what Marillyn Hewson has to say about that. In addition, growth in Missiles and Fire Control. Everything else is gravy. Lockheed Martin (LMT) is my favorite defense name regardless.

Get an email alert each time I write an article for Real Money. Click the "+Follow" next to my byline to this article.
TAGS: Mergers and Acquisitions | Earnings | Fundamental Analysis | Investing | Politics | Stocks | Aerospace | Defense | Semiconductors & Semiconductor Equipment | Technology | Real Money