"The future's on its way, the past is gone

Old and rusted with your busted bones

Break the crystal ball, you're on your own

Wipe away the fear of the unknown"

Into the "where"? The day after. The day before. How strange a place to be.

This morning, bones creak, the mind races. We find ourselves in painful delight, one trading day removed from a positive yet volatile week. One day ahead of the ceremonial start of second-quarter 2021 earnings season.

I hate to disappoint the mighty Casey, but Mudville is not the only place where there will be no baseball today. Nor will there be any quarterly numbers or any macroeconomic results of any significance reported. Today, we only have the "now," so at least celebrate what is and prepare thyself mentally for what shall be.

Prepare to be both right and wrong about aplenty and adjust fire to both realities as we traverse the environment provided. For thou dost know that thy greatest ally and thy greatest adversary both reside within thine own bathroom mirror. All said, I propose we accept ourselves as we are, see the beauty in what appears to be less than, and move on.

Looking back, equity markets soared on Friday in response to a reversal of fortune in Treasury markets. One day, utter despair. The next, near euphoria.

I won't complain. My P&L did better on Friday than it did poorly on Thursday, but even I must admit this environment with its glaring lack of day-to-day memory (wow, do I miss human involvement in price discovery) and endless mini- or sector-driven rotations that seemingly permit the dance to go on with not one broad equity market correction that shakes our very foundation, but several partial corrections, or full corrections that partially impact the marketplace while allowing at least at the headline level progress even if at times the trunk of the beautiful oak tree seen from thy window has been the home of harmful parasites eating from within.

Equity traders must keep in mind that Friday's rally occurred on much lighter trading volume than Thursday's beat-down. Generally speaking, that's not a short-term positive. While the S&P 500, Nasdaq Composite and Dow Jones Industrials all worked toward rather pedestrian gains for the holiday-shortened week, once again rendering new all-time highs quite unremarkable, the indices more directly associated with economic growth all had really nice low-volume rallies to cap off rather dour weekly performance. The Dow Transports and Russell 2000 both gave up more than 1% over the period while the S&P Mid-Cap 400 and Small-Cap 600 also contracted.

The sector breakout was also nothing to boast about. Using SPDR sector ETFs as proxies, REITs (XLRE) and Utilities (XLU) had the best week, taking the top two spots of the 11 in the weekly performance tables, while cyclical sectors took four of the five bottom performers, including Energy (XLE) and Financials (XLF) at the very bottom coming off the OPEC Plus mess and going into the big banks and their quarterly numbers. In addition, Technology did rather well overall, led by hardware, which might be read as Apple (AAPL) , and software. Internet stocks (part of Communication Services) and semiconductors did less well as a number of Internet giants reacted poorly to being targeted by the Biden administration in a series of points made through executive order late last week.

That said, Amazon (AMZN) , which is not classified as a tech nor an Internet stock despite being perhaps the most glaring example of what folks consider to be "big tech," had a very nice week. Break 'em up? Shareholders will probably do better. Don't break 'em up? New CEO Andy Jassy could always split the stock. Hence, shareholders do better, and Amazon still goes on to eat the world. Just for the new kids... Amazon is still considered a broadline retailer, so the company according to the marketplace is more similar to, say, Dillard's (DDS) than it is to Alphabet (GOOGL) . Hey, don't ask me. I just work here.

Just an FYI, both AAPL and AMZN appear to be breaking out techncially. AAPL in particular has put together six consecutive "up" weeks. (BTW, both stocks are holdings of Jim Cramer's Action Alerts PLUS charitable trust.)

The thing that caused last week's volatility is all still there. The Treasury will auction off $38 billion of new 10-year paper here on Monday afternoon. That note gave up as little as 1.25% on Thursday morning and as much as 1.36% on Friday afternoon. I saw the 10-year at 1.33% early this morning.

It may be key to note that the 30-year bond bottomed out at 1.99% and now gives up less than 1.96% at zero dark thirty Monday morning. (Oh, and pet peeve here.... beware of financial reporters on major networks who don't get the whole inverse relationship between price and yield in debt markets. Higher-moving yields do not constitute a rally in Treasury markets. I mean, hire someone with a little experience. Please. Why does this still happen?)

The forest is still fraught with danger. The Delta variant still hunts both the young and those too frightened to understand. Economic recoveries still seem to slow, both here and abroad. China still targets both business and Taiwan, threatening trade while causing geopolitical concern.

European Central Bank (ECB) President Christine Lagarde foresees a policy pivot in the short term, while Treasury Secretary Janet Yellen tries to move her global minimum tax forward from an agreement at the G-20 level and most of the Organization for Economic Cooperation and Development (OECD) through Congress. Just understand that both Ireland and Hungary (which would be harmed economically by such a policy) have the power in theory to force a "no vote" by the entire 27-nation bloc European Union, so you may not need to put the champagne on ice for a good long while.

You're well-aware that Tuesday kicks off "the season." You may not be well-aware that Federal Reserve Chairman Jerome Powell with his semi-annual dog-and-pony show before the House Financial Services Committee and Senate Banking Committee (Wednesday and Thursday) will headline a busy week of Fed speakers. Fortunately for us, the clown car pulls out on Friday morning the second after New York Fed President John Williams stops flapping his gums and the Fed goes into its pre-policy meeting blackout period until the carnival arrives once again on Wednesday, July 28.

As for earnings, the second quarter is going to be a doozy. Will it matter with the headline large-cap indices already trading at all-time highs and the S&P 500 trading at 21.4x forward earnings? Good question. Goldman Sachs (GS) and JP Morgan Chase (JPM) both report on Tuesday after retaking key technical levels on Friday. They will be followed by Bank America (BAC) , Citigroup (C)  and Wells Fargo (WFC) , and because nothing goes better with banking than potato chips and soda pop, PepsiCo (PEP) also reports, which seems a little out of place with this crew.

As of the most recent data released by FactSet, we will enter this earnings season with expectation for second-quarter earnings growth of 64% on revenue growth of 19.7% over second-quarter 2020, and accelerating from the 52.5% first-quarter earnings growth that came on 10.9% revenue growth. This is expected to be the peak quarter for the year in terms of year-over-year growth as this is the year with the greatest divergence between economic and living conditions due to the pandemic. The gigantic growth numbers are likely priced in to some degree, and I would think that CEOs are going to have to sing like birds in their guidance in order to see a desired effect for shareholders.

I suspect what the U.S. 10-year note gives up and U.S. dollar valuations will drive this market in aggregate more over the next few weeks than any reported numbers might do, at least beyond single stocks in isolation.

To be long Microsoft (MSFT) ? I saw it at Bloomberg on Sunday. I don't know who had it first. It appears that Microsoft has agreed to acquire RiskIQ, which is a cybersecurity software provider. The firm's clients include Facebook (FB) , American Express (AXP) ) and the U.S. Postal Service. The price tag is expected to run in the neighborhood of $500 million. Once again, Microsoft identifies growth where it is and goes and gets it. My price target remains $315.

I don't know. I am not in the name, and the name is trading higher in Monday morning's pre-opening session. 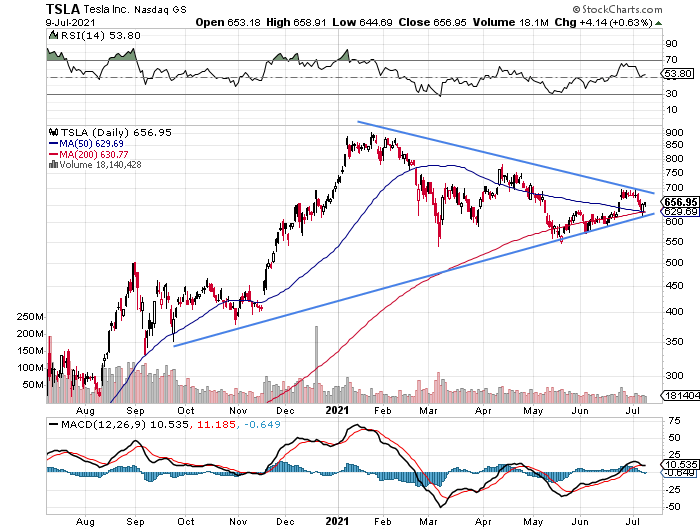 That said, while the enormous year-to-date pennant formation is closing, Tesla (TSLA) , the stock (not the band) appears to have suffered a "death cross" on Friday with the 50- day simple moving average (SMA) moving ever so slightly below the 200-day SMA. Now, if the crossover does not take and quickly moves in the other direction -- which it could with the shares trading well above $630 -- then "no harm, no foul" I guess.

I don't currently have a dog in this fight, but I know many of you do and I wanted to make sure that you were fully informed. The daily moving average convergence divergence (MACD) is also a long way from looking healthy. Just be careful if you are in this name. I see more short-term risk to the down side for now.

Get an email alert each time I write an article for Real Money. Click the "+Follow" next to my byline to this article.
TAGS: Mergers and Acquisitions | Earnings | ETFs | Federal Reserve | Investing | Stocks | Technical Analysis | Treasury Bonds | Automotive | Materials | Technology | Real Money