Dutch Bros just celebrated its 30-year anniversary, Ricci noted, and the company continues to deliver what he termed "careful" growth that maintains its unique company culture. Ultimately, Dutch Bros plans to expand to more than 4,000 locations nationwide from the current 538. Ricci said the Dutch Bros model has been successful in many locations so far and it is able to finance its growth without the need to raise more capital in the immediate future.

Cramer said Dutch Bros has great coffee, a good plan and has no exposure to Russia or China.

Let's check out the charts and indicators. In this daily bar chart of BROS, below, we can see that we do not have a lot of price history to work with. Prices have largely traded sideways the past six months. BROS has crossed back and forth around the 20-day and 50-day moving average lines. The On-Balance-Volume (OBV) line shows a decline from November, telling us that sellers of BROS have been more aggressive. The Moving Average Convergence Divergence (MACD) oscillator is bearish as it sits below the zero line.

In this weekly Japanese candlestick chart of BROS, below, we can see that a bearish engulfing pattern marked the peak back in October. In recent weeks we can see a number of spinning tops and doji, but their location is in a sideways market so they do not mark a bottom reversal. The weekly OBV line is bearish.

In this daily Point and Figure chart of BROS, below, we can see a potential upside price target of $65. Unfortunately, our other charts are not in agreement. 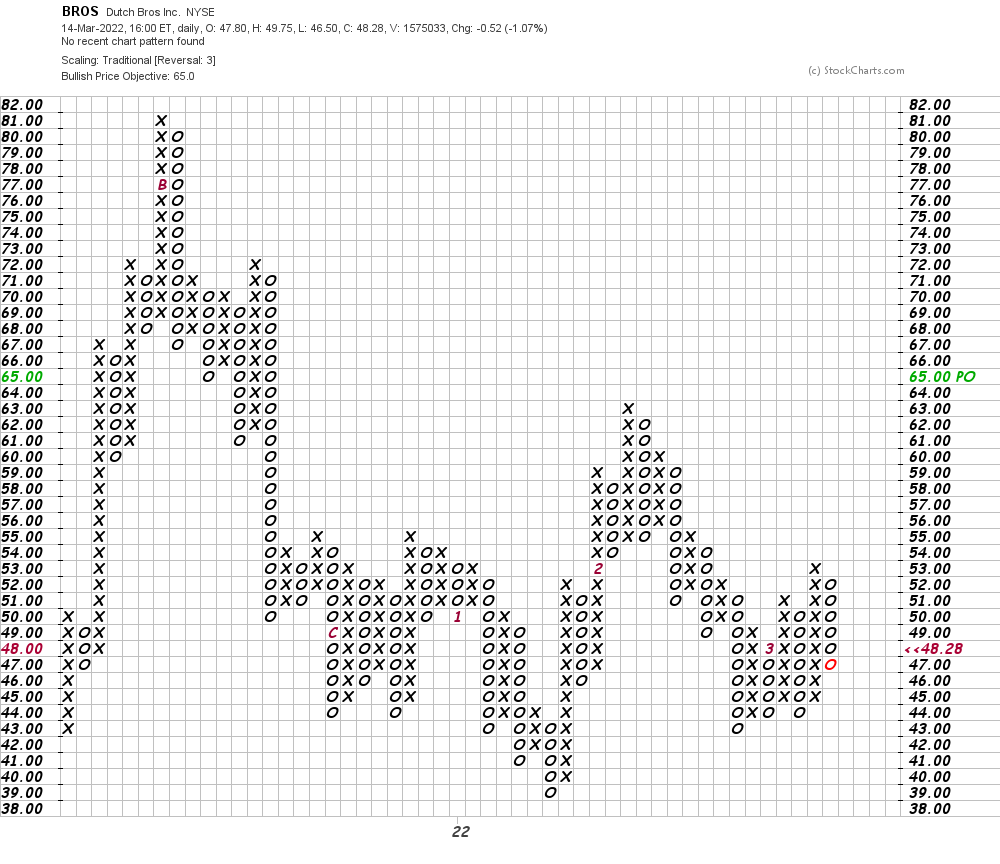 Bottom line strategy: The charts and indicators of BROS do not have enough "technical caffeine" to get a rally going at this point. Stay at home and grind your own is my advice for now.