Just prior to my vacation I was looking for one more rally into an overbought condition that I had expected to arrive around Labor Day. I thought it would occur last week but it seems to have happened in one day, as last week was a whole lot of nothing in the market. After all, when the beloved PowerShares QQQ Trust (QQQ) begins the week at $380 and ends the week at $381 you know there wasn't a whole lot going on.

Statistically speaking breadth has been okay but not great. The Cumulative Breadth has still not made a higher high. Yet the McClellan Summation Index was finally able to lift itself up off the mat and enjoy some real upside. At present the Summation Index would need a net differential of -1300 advancers minus decliners on the New York Stock Exchange to halt the rise. I would call that cushion tentative, especially with the current overbought condition. Think about it like this: one decent down day could halt the rise.

The number of stocks making new highs on the NYSE made it over 200 last week for one day, before retreating. Nasdaq was a bit better with three such days. But with indexes at new all time highs, there should regularly be over 200 new highs daily.

On the sentiment front, I think we are mixed. The Daily Sentiment Index (DSI) never got over 90 last week for the S&P 500 or Nasdaq. My guess is because when the market pretty much flat lines, there isn't much to get giddy over. Yet the DSI for the VIX is at 15. As a reminder, a single-digit reading is a sign we are due a bout of volatility. It was last that low in mid-August just prior to the S&P 500 tanking 100 points in a matter of days.

The American Association of Individual Investors (AAII) saw bulls rise to 43%, up from 30% a few weeks ago. It is not extreme but it is a shift in sentiment. The National Association of Active Investment Managers (NAAIM) held steady at 94 on their Exposure, which is up from 70 a few weeks ago. So let's call these three (including the DSI) leaning toward too much bullishness but not extreme. 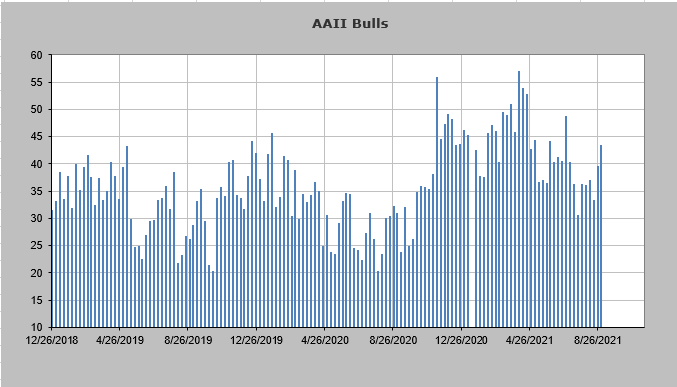 On the flip side is the rise in bears for the Investors Intelligence survey. At 21% it is the highest since last fall. That is a change. Also bulls are at 52% which does not speak of too much bullishness.

Then there are the put/call ratios. The 10-day moving average of the equity put/call ratio has fallen but is not yet extreme, although it won't take much to get it there.

Yet the 21-day moving average of the Index put/call ratio is now the highest in 10 years. Yes, it has been a decade since folks were so loaded up on index puts. My takeaway is that folks like their stocks but not the indexes.

In any event, here is a chart dating back to 2007. The blue box has twin peaks with the first being March 2007 and the second August of that year. Both led to approximately six weeks of rallying in the market. Of course what came after that late August rally wasn't so bullish, with the market peaking for that cycle in mid October that year.

Point A is late May 2010 which came after the Flash Crash. Note that we had a 2-3 week rally and then came back down, with the low arriving in August that year. Point B is October 2011 which was after the big move down from August when US Debt was downgraded. Point C was just prior to the election last year which was after the market had been correcting since early September.

What's different now? There has been no correction in the indexes.

For the coming week, with the overbought condition I think we are more apt to correct or at best chop. Keep your eyes on interest rates. The yield on the 10-year note is up against resistance (1.35%) and a downtrend line. A break over that could give us some volatility in markets.