the heart of the wicked is of little worth.

So it was that I listened to European Central Bank (ECB) President Mario Draghi on Tuesday morning. I listened to the man with the silver tongue, and I watched. What I saw was the euro fall off of cliff, the U.S. Dollar Index (DXY) spike, and Dow futures run from well below fair value to well above in response to European equity markets doing the same.

Draghi spoke from Portugal, and the outgoing leader of the monetary union's central bank was clear. "In the absence of such improvement, such that the sustained return of inflation to our aim is threatened, additional stimulus will be required." Draghi also stated, "If the crisis has shown anything, it is that we will use all the flexibility within our mandate to fulfill our mandate - and we will do so again to answer any challenges to price stability in the future."

In response, at least in the middle of what some of you call night, 10-year German bunds were yielding a negative 0.295%, while U.S.10-year notes were giving up 2.05%, suggesting that if the ECB is preparing to once again crank up their purchasing of sovereign, agency, and corporate debt (quantitative easing), that the Fed might need to be more dovish. Keep in mind that in addition to the Federal Open Market Committee (FOMC) policy meeting that kicks off here on Tuesday and culminates on Wednesday, that the markets will hear from the Bank of Japan on Wednesday and the Bank of England on Thursday.

Short, measured steps. Slow movement. Not a lot of ground covered. Those who have hiked the Grand Canyon refer to the method of travel as 'The Kaibab Shuffle" after the more rugged, yet still maintained trail meandering from rim to river to rim.

Oh, you can find more rugged trails out there, but break an ankle, or get surprised by a big cat or a rattler and nobody will find you. Mountain climbers and various other outdoors types may have other nicknames for this cautious, and after a few miles, somewhat painful mode of personal locomotion.

Domestic equity indices have continued to travel in this way for more than a week now on ever-quieter trading volume ahead of Wednesday's FOMC shindig. The S&P 500 is taking the high road, riding the 50-day simple moving average (SMA) since June 10, the Nasdaq Composite the low road, running just below that 50-day line since the very same day. Just take a look at how trading volumes have tailed off since the month of June began, a period now encompassing 11 business days and roughly 5% gains across these markets, where all of the gains were made over the first week of the month.

He Said, She Said

The U.S. has accused Iran of the attacks on two tanker ships in the Gulf of Oman last week. Iran has denied responsibility. Most of the rest of the world seems unsure. Iran states that by the end of the month the nation will exceed agreed-upon limits to its enriched uranium stockpiles. Though President Trump has withdrawn the United States from the 2015 nuclear deal with Iran, European powers have largely tried to save the deal, and even tried to help Iran find ways around U.S. sanctions. This violation, if realized, will likely wear thin on those nations, one would think.

The U.S. is preparing to deploy up to an additional 1,000 troops to the region to help with security and intelligence gathering. These troops will join the 20,000 already present in the area, as well considerable naval and aerial assets. Bottom line, the situation remains fluid. As long as it is in the best interest of the U.S. and American allies to enforce stability in routes of commerce in the region, and as long as the U.S. trade war with China teeters on the brink of a contest over strategic influence, it becomes far less likely that, unless the economy ever forces a condition of austerity on public spending, that defense spending would most likely continue to be prioritized. Remember this chart? 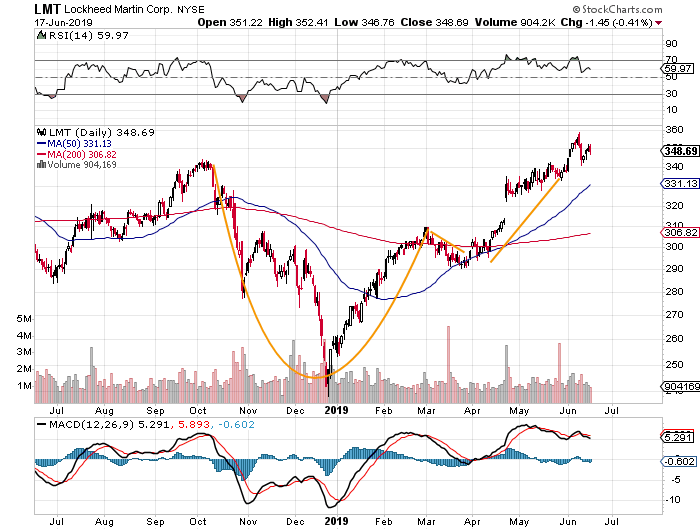 While Lockheed Martin Corp. (LMT) has wiggled of late, partially thanks to the possibility that the deal to sell F-35 fighters to Turkey may fall through as that nation plans to install missile defense systems purchased from Russia, the U.S. Air Force announced on Monday that there has been a successful test of the AGM-183A Air Launched Rapid Response System from a B-52 Stratofortress Bomber.

What's the AGM-183A? That's what has become of the need to develop the ability to strike through the use of, and defend against, hyper-sonic weaponry that I first warned you about a couple years back. You may recall that there has been a need to "catch up" to where the Chinese and Russian were in this "next-generation" field of warfare.

This particular test is partially the result of the $928 million contract awarded to Lockheed Martin last summer. This program is expected to be completed by 2022. Will there be more? Think the rest of the word wants to hold hands and recite poetry together on Sunday afternoons while gazing lovingly into our eyes? Me neither.

This evening, we'll hear from Adobe Inc. (ADBE) , the provider of imaging and publishing software that has become quite critical to businesses as a provider of solutions in the areas of content creation, marketing and their monetization. In short, Adobe is one of Jim Cramer's "Cloud Kings." Think Creative Cloud, think Photoshop, think Acrobat, think Premiere Pro, and so on.

Expectations for the second quarter are for sales of $2.7 billion, or year-over-year growth of 23%, more or less in line with past performance. Earnings per share, however, are projected at a consensus $1.78, or just a 7% increase from the same period a year ago, the slowest pace of growth in a number of years.

Recall that Adobe had guided EPS to $1.77 on revenue of $2.7 billion three months ago. The focus, I think on Tuesday night, will be not just on the Digital Media segment, Adobe's largest at roughly 68% of revenue generation, but the ability to grow subscription revenue, often referred to as ARR (annual recurring revenue). That number printed at $357 million in the first quarter. 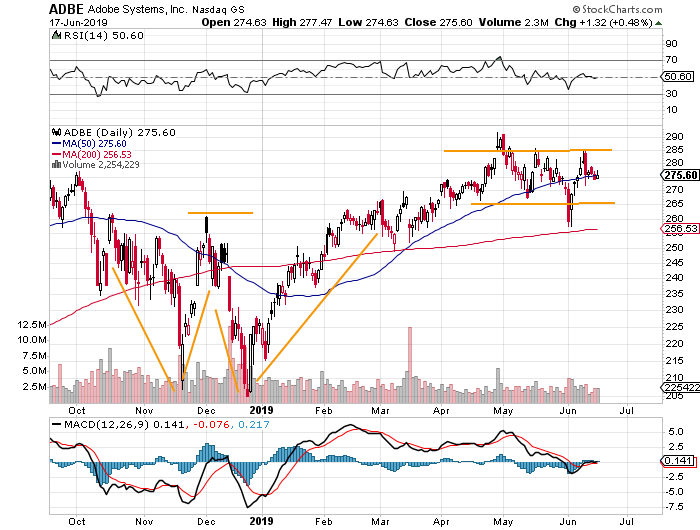 Clearly, these shares broke quite nicely out of the double bottom of late 2018 (that looks more like a cup with handle) for a lot of stocks and since has spent several month basing. I recently moved my target price up to $340 (up from $315) for this name, which could be a little aggressive to be honest, but I do feel that when and if capex returns in size to our economy that the cloud names are going to be first in line. When I made that change, I also moved my panic point up to $265 from $244, as this name has been a huge winner for my book, and I am not going to risk one my better trades.

Traders looking to purchase some limited protection for a long position at a discount might consider grabbing puts expiring this Friday at a strike price close to the last sale. On Monday evening this could be done for around $6. Then sell a like number of puts expiring this Friday, but with a strike price $10 below that last sale. Monday night, these could be sold for roughly $2.60. In other words, the trader already long these shares would be laying out $3.40. In the event of disaster (a $10 or more decline in share price), the trader would have to buy the shares back possibly (well?) above the last sale, but will have extracted $6.60 per share in capital, leaving the size of the position unchanged.

Get an email alert each time I write an article for Real Money. Click the "+Follow" next to my byline to this article.
TAGS: Federal Reserve | Investing | Stocks | Aerospace | Defense | Software & Services | Technology | Middle East | Real Money | Earnings Preview