The charts saw several violations of short-term uptrend lines Wednesday as some other yellow flags appeared as well. And while the data remains largely neutral, one psychology component may be weakening. As such, we believe the weight of the evidence has shifted sufficiently to change our outlook.

All of the major equity indices closed lower Wednesday with negative internals on the NYSE and Nasdaq as overall trading volumes declined from those of the prior session.

Meanwhile, the Dow Jones Transports (see below) did an about face as it closed below near-term support after the prior significant two-day rally. However, it did maintain its short-term uptrend. 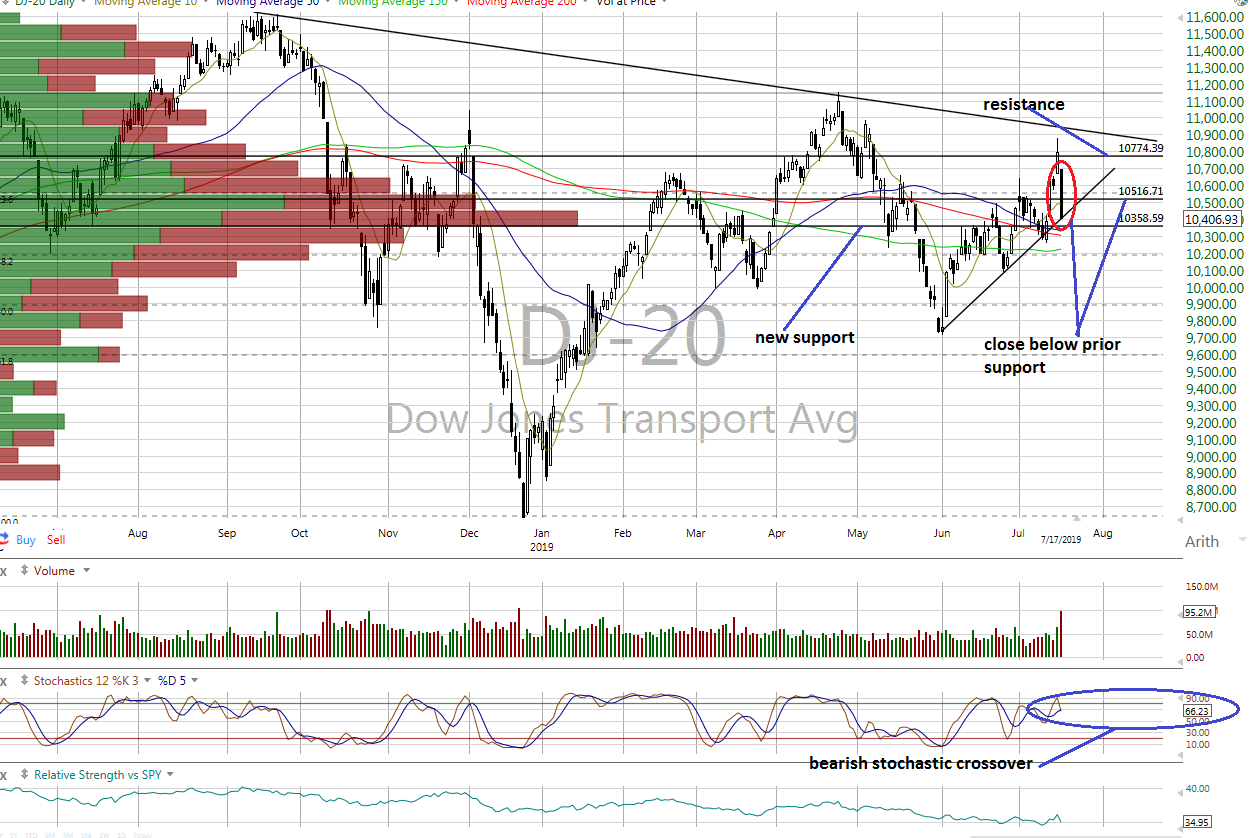 Breadth deteriorated a bit as well as the cumulative advance/decline line for the All Exchange dropped to neutral while the Nasdaq's turned negative. The NYSE A/D remains positive.

Given the chart action, we now suspect tests of support levels may now be more likely.

Should high "volume at price" (VAP) supports be violated, the picture would darken, in our opinion.

The detrended Rydex Ratio (contrary indicator) at +0.66 is neutral.

Tuesday's AAII Bear/Bull Ratio (contrary indicator) was also neutral at 30.33/31.67. We continue to view the lack of enthusiasm on the part of the crowd as a positive.

The percentage of S&P 500 stocks above their 50-day moving averages (74.8%) dropped back to neutral from its prior bearish signal.

However, the Open Insider Buy/sell Ratio (45.2), while remaining neutral, has seen a notable decline in insider buying activity that may worth noting.

The S&P 500 is trading at a forward P/E multiple of 17.2x consensus 12-month earnings estimates from Bloomberg of $173.64 per share, leaving it near the "rule of twenty" fair value multiple at 17.9x. As such, it is somewhat less compelling than previously viewed, but not negative.

We now believe the evidence has shifted enough to alter our near-term outlook to "neutral" from "neutral/positive" as support levels may now be more likely to be tested.

Get an email alert each time I write an article for Real Money. Click the "+Follow" next to my byline to this article.
TAGS: Indexes | Investing | Stocks | Technical Analysis