Ahead of the Fed's comments Wednesday afternoon coming out of its latest FOMC meeting, how do the markets charts and data look?

The one technical event of note Tuesday was the DJIA closing below near-term support, which shifted its short-term trend to negative from neutral and leaving chart trends mixed.

While market cumulative breadth remains positive, the psychology data continue to be of some concern, somewhat counterbalanced by neutral McClellan OB/OS Oscillator readings. 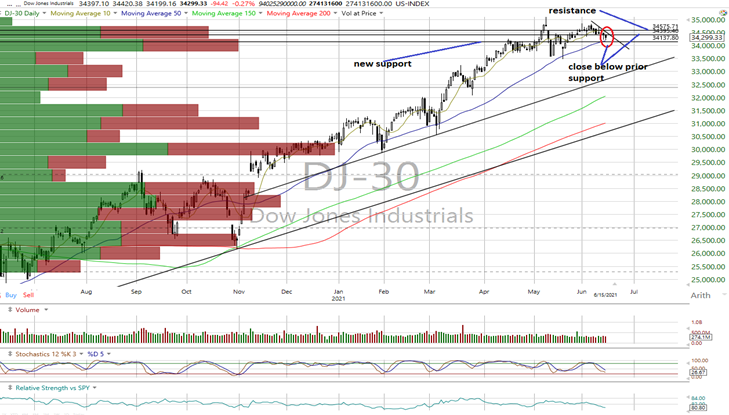 The major equity indices closed mostly lower Tuesday with negative internals on the NYSE and Nasdaq.

The only index posting a gain was the Dow Jones Transports, which remains in a near-term downtrend.

It was joined by the DJIA (see above) that closed below its near-term support level and is now near-term negative as well.

The MidCap 400 is neutral with the rest of the indices still in near-term uptrends.

Despite Tuesday's negative breadth, the cumulative advance/decline lines for the All Exchange, NYSE and Nasdaq remain positive and above their 50-day moving averages.

The Value Line Arithmetic Index did flash a bearish stochastic crossover signal, which we will monitor closely.

However, the Rydex Ratio (contrarian indicator), measuring the action of the leveraged ETF traders, rose further to 1.6 and is now deeper into very bearish territory.

This week's contrarian AAII bear/bull ratio (22.31/40.24) turned mildly bearish as bears declined while bulls increased. That was also the case for the Investors Intelligence Bear/Bull Ratio (contrary indicator) at 16.2/54.5, which remains on a bearish signal.

The Open Insider Buy/Sell Ratio edged up to 20.1 but remains bearish as signs of notable insider buying interest have yet to appear.

Valuation continues to appear extended with the forward 12-month consensus earnings estimate for the S&P 500 from Bloomberg at $191.76 per share. This leaves the S&P's forward P/E multiple at 22.1 while the "rule of 20" finds fair value at 18.5x. The valuation spread has been consistently wide over the past several months while the forward estimates have risen rather consistently.

The 10-year Treasury yield was unchanged at 1.5% despite the FOMC jitters. We view support at 1.4% with resistance at 1.55%. We continue to believe the moves in the 10-year yield may well have the greatest influence over the near-term action on the equity indices.

We remain near-term "neutral/positive" in our macro-outlook for equities, while the FOMC comments may present some volatility for the markets when released at 2:00 Wednesday.

Get an email alert each time I write an article for Real Money. Click the "+Follow" next to my byline to this article.
TAGS: Indexes | Investing | Markets | Stocks | Treasury Bonds | U.S. Equity