At the onset of the pandemic, Dow bought back its own shares as a sign of confidence in its future. Shares of Dow are up 187% over the past year.

Looking ahead, Fitterling said 25% of Dow's sales stem from housing and the housing market has remained strong throughout the pandemic. Now that we're seeing signs of a recovery in China and the U.S., Fitterling said, the outlook is strong for all of Dow's other end markets, such as autos, electric vehicles, alternative energy and packaging.

Cramer said shares of Dow are still not expensive and they sport a terrific dividend.

Let's check out the charts and technical indicators. I find it interesting that the last time we did a deep dive on the charts of DOW was way back on March 17, 2020, where we were lucky enough to call the bottom: "Dow has found some buying interest in the $24-$22 area. I have not yet seen a reversal pattern but we may get a two-day reversal pattern Tuesday -- a low close followed by a high close. Buyers get ready."

In this updated daily bar chart of DOW, below, we can see that prices have marched higher the past 12 months. There have been some corrections along the way with prices mostly making sideways consolidations. The slope of the 50-day moving average line and the 200-day moving average line are positive and prices are not extended (overbought) when compared to these smoothed trend lines. The trading volume has been steady the past year, which is OK, but a pattern of increasing or expanding volume would be better.

Old chart watchers like myself grew up learning that volume should expand in the direction of the trend. A pattern of shrinking volume would be worse. The On-Balance-Volume (OBV) line moved up into June and then largely moved sideways, suggesting a balance between buyers and sellers of DOW. The trend-following Moving Average Convergence Divergence (MACD) oscillator has stayed above the zero line since May but it has not moved up strongly; it is "just OK."

In this weekly Japanese candlestick chart of DOW, below, we can see the rally from the March 2020 nadir. Prices are in an uptrend above the rising 40-week moving average line. The two most recent candle patterns have small real bodies, which tells us that bulls and bears are getting in close balance, and that can identify a potential turning point or reversal. The OBV line shows a rise for the past 12 months, but I need to point out again that trading volume is disappointingly neutral. The MACD oscillator is bullish, but it narrowed sharply in January and February and was very close to a bearish crossover.

In this daily Point and Figure chart of DOW, below, we can see a potential upside price target of $70, but it will not take much of a decline to weaken the picture. 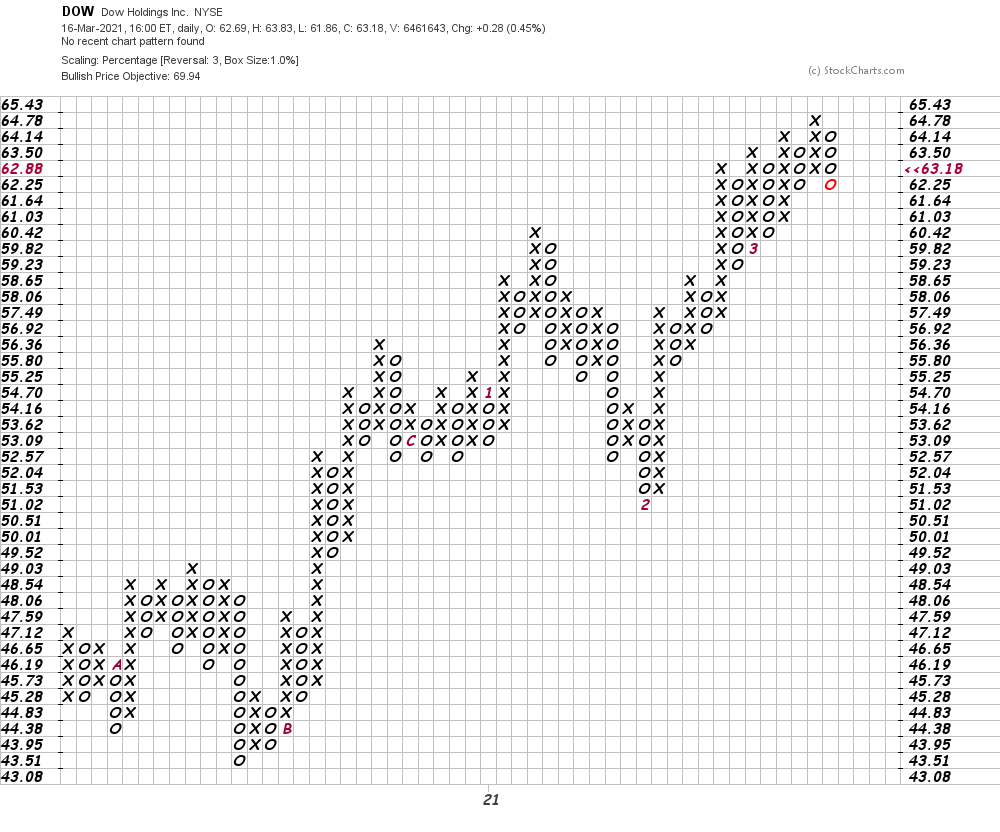 In this second Point and Figure chart of DOW, below, we used weekly price data. Here the software is projecting $92 as a potential price objective.

Bottom line strategy: I understand that buying back company stock puts a bid in the market and it can be just as important as key insiders buying stock in the open market, but I would like to hear about investment opportunity and growth. The charts of DOW are still in an uptrend, but with the recent small real bodies on the candlestick chart (above) I would recommend that longs raise stops to $57. If DOW was to make a downside reversal I do not want to give back much of the profits.

Get an email alert each time I write an article for Real Money. Click the "+Follow" next to my byline to this article.
TAGS: Investing | Stocks | Technical Analysis | Chemicals | Materials | Industrials | Manufacturing | Mad Money | Executive Interview | Real Money