I know. At the headline level, it still seemed as if all of the pieces were still moving across our financial landscape, but there certainly was something to the idea of a stall that we just brought up roughly 24 hours ago. Sure, if one is in some of the hot names, such as Tesla (TSLA) , Moderna (MRNA)  or Boeing (BA) , then the P/L may have looked better than did the general marketplace. The fact is that portfolio allocation nudged back toward the pandemic-impacted model that had worked so well for so many months, but without really giving up on the re-opening trade.

What I am kind of trying to say is that the U.S. dollar and U.S. Treasury securities stopped weakening almost in place without actually showing strength. The VIX did actually show some early strength, but managed to give most of that back, while put/call ratios have managed to almost stop moving completely, as if nailed to levels that are very close to more than three-month lows for all of December so far.

As for equities, only three select sector SPDR ETFs managed to sport the green for Monday, including Communications Services (XLC)  and Technology (XLK) , two sectors that often move together, but also including the Utilities (XLU) , as the bond proxies showed some separation.

The bottom half of the sector performance tables for Monday was littered with the debris of everything that works well if our economic recovery proceeds smoothly, which it no longer is. Is that troubling? Sure, if regions of the country are forced to prioritize public safety over economic activity. That is exactly what seems to be happening. Even as we think we see a new dawn peering over the tops of that distant treeline that we can barely make out when clouds leave bare the moon and invisible to all as the darkest moments of night pass in silence.

Markets really did seem to pause as our evermore prestigious legislators continue to struggle to get together and compromise on even a smaller-than-hoped for fiscal support package, This, as the federal government is once again in the awkward position of running out of dough by 12:01 am ET, this Saturday. In other words, we'll drive off of a cliff on Friday night if Tweedle Dee and Tweedle Dum can't start getting their acts together.

The good news, which is only "good" because the bar that we set for this crew is so incredibly low, would be that the two sides might be able to agree on one week of emergency funding. They'll do this in order to continue on with negotiations that would in a perfect world tie in a full year's budget with fiscal support for an economy that is starting to show more cracks with each passing round of labor-market or consumer-related data.

The gist of the matter is that senators and representatives from both sides of the aisle are starting to gravitate toward this $908 billion fiscal plan that has been bandied about since last week. That's a positive. The problems also start there. House Democrats still want more funding for state and local governments, while Senate Republicans still want Covid-19 liability protection for businesses, schools, healthcare facilities and municipalities as employees exposed to the virus in the process of completing their daily routines become infected.

Who's right? They both are to some degree.

You need the fire truck to roll down your block when you dial 911. You also need to be able to purchase a loaf of bread. Someone has to hop out of that fire truck when it gets to your home, and someone has to stack loaves of bread on a shelf. You probably also need to drop another round of helicopter on the people who need it the most. Many are not just falling behind, they are becoming hopelessly behind. The bottom line is that this package, if done correctly, will end up in the $2 trillion range, which is close to where the Trump administration and Speaker Pelosi were before the election.

Where do we go with this. We'll start with record Covid-19 hospitalizations across the nation. We'll start with healthcare systems running at, close to, or even beyond capacity in some regions. We'll move onto public response.

Last week, California moved to reveal a new system based on levels of rising hospitalizations that placed roughly 33 million citizens under "stay at home" orders as of Sunday night. New York Governor Andrew Cuomo addressed his state on Monday. The recent surge in cases and hospitalizations in New York is still below the awful levels of last spring, but are rising and doing so quickly. The holiday season is a real danger everywhere this year, but New York, at least downstate, is quite urban, and is home to a lot of folks.

The governor explained that if recent trends were not reversed in short order (five days), that "red zones" would be created where hospital beds become scarce. Gov. Cuomo also unveiled a plan to roll back liberties around inside dining in New York City and dining capacities elsewhere. Most troubling, Dr. Anthony Fauci of President Trump's Covid-19 Task Force and already a medical advisor to President-Elect Biden, appeared (virtually) on Gov. Cuomo's address, and indicated that in terms of new infections, the nation could still be a week to a week and a half away from the peak of the "Thanksgiving surge."

I know. Some of you will find fault in the leadership provided by some of the names mentioned above, while others think that they have been marvelous. I have my opinions, but the fact is that those elected to positions of responsibility must make command decisions when in a crisis, and we are in a crisis. This is not, or should not be about politics. I am an infantryman trying to get from Point A to Point B through heavy vegetation and over rough terrain with just a map and lensatic compass. That is all. Fact is that regional leadership in urban areas, as well as their suburban counterparts, are showing increased caution, which will certainly slow economic activity. That's the environment. That's reality.

Example? I lease an auto for my business. Usually. That lease ran out in early September. I did not renew. I did not replace. Why would I? I don't go anywhere more than two miles from my home office. If I need to go that far, I'll walk. If I need to go that far quickly or in the cold, I'll borrow my wife's car, which is old and we own outright. She's probably not going anywhere on most days either.

How many other small businesses are putting off expenditures until they know that underlying demand for whatever it is that they do, supports the expense? Should my business require travel again in the future, then I will lease another car. I heard that if the demand is there, they'll make more.

What do the Dow Jones Industrial Average, Dow Jones Transportation Average, S&P 400, S&P 500, S&P 600, Nasdaq Composite, and Russell 2000 all have in common? Answer: They all closed either up or down on Monday less than half of one percent from where they closed on Friday. The Nasdaq 100 was the day's only outlier, and just barely. That tech-centric index, which excludes financial stocks, closed up a whopping 0.54%.

Losers beat winners both up at Times Square as well as down on Wall Street. The margin was less than decisive at either locale. Declining volume edged advancing volume at the New York Stock Exchange, but the table was turned up at the Nasdaq Market Site. Trading volume ebbed on Monday from Friday. Readers should note, however, that aggregate trading volume for constituent members of the Nasdaq Composite has now exceeded its own 50-day SMA (simple moving average) for 15 consecutive full day trading sessions. That index has also closed higher for the day over eight of the past 10 sessions.

Tech breakout? Certainly the look of at least a continuance of trend.

Not a plan, just a hunch or two. On Monday evening, Stitch Fix (SFIX) hit the ball out of the park. The shares traded 32% higher overnight after beating expectations and raising guidance. I don't have any position right now, but if I were a betting man, I would bet that at some point today, I will be short this name, if only for a rental position.

In addition, McDonald's (MCD) is having a rough few months of late, and suffered a downgrade on Monday to a "Hold" as well as a reduction in price target to $225 from $250 at the hands of the highly rated James Rutherford at Stephens. He thinks that the company has performed well throughout the pandemic, but that most of this is priced in. He also notes friction over costly changes being made to cost structures that will force higher expenses upon the franchisees. All I know is that the stock closed at a very dangerous place on Monday. 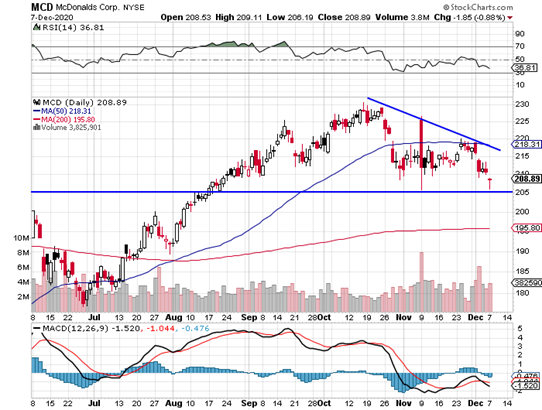 Technically, a descending triangle is quite a bearish pattern. The shares closed at $208.89 on Monday, with an intraday low of $206.19. On Nov. 9 (earnings related), the shares bottomed out at $207.17. What we really have here is a twice-tested support level likely to open under pressure on Tuesday. Do I buy some here? Probably not.

Should that support crack, however, I do think I start to accumulate as the shares close in on the 200-day simple moving average at $195.80. I do think I want to be long MCD in six to nine months at late 2020 prices.

They say not to time the markets. Heck, that's about the only thing I think I'm pretty good at.

(Boeing is a holding in Jim Cramer's Action Alerts PLUS member club. Want to be alerted before Jim Cramer buys or sells this stock? Learn more now.)

Get an email alert each time I write an article for Real Money. Click the "+Follow" next to my byline to this article.
TAGS: ETFs | Futures | Investing | Markets | Politics | Put Call | Stocks | Trading | VIX | Coronavirus

The typical investor has caved in to negativity. Many have sold off big percentages of their stock, fund and ETF positions.