By TIMOTHY COLLINS Nov 04, 2019 | 12:06 PM EST
Stocks quotes in this article: UAA
The very first trading book I read about trading price patterns made one thing very clear on buying dips: Avoid accounting issues and accounting fraud. The second book on investing I read noted certain scenarios to avoid when buying a company. One of those scenarios: accounting fraud.
I've seen it talked about by Jim Cramer, a man as smart as any of the other authors I've read, especially when it comes to situations like Under Armour's  ( UAA) , and the sentiment is the same.
You may look at the pretty good earnings numbers for UAA and think the nearly 16% selloff is a bargain at noon, but you're buying unknowns that go back to at least July 2017. That is the date the company said it began responding to requests for documents around its accounting. Currently, the company is under Department of Justice investigation over its accounting practices. The issue at hand is whether the company shifted sales from quarter to quarter to appear healthier.
On one hand, simply moving the sales between quarters shouldn't have a huge impact on the year-over-year full-year comparisons. In the end, sales are sales. But it could have an impact on tax-rate paid, interest rates received on debt, the ability to do secondary offerings at potentially inflated short-term prices, and compensation received by executives. It's not as simple as saying it all came out in the wash at the end. Furthermore, it creates an internal culture that this approach is acceptable.
Of course, that only matters if the company did something wrong. And we've seen the founder already pushed out, but one has to wonder: If the company has been responding to issues since July 2017, how has it failed to clean up its act to even avoid the investigation continuing?
We have a market hitting all-time highs, and is this really a time when you want to be rolling the dice on accounting issues that could have a continued impact on culture and leadership within the company?
Under Armour did report a stronger-than-expected bottom line to start the week, as the 23 cent per share earnings exceeded Wall Street's 18 cent expectations. Revenues basically finished in line, but guidance appears soft. After beating by a nickel, the company guided full-year earnings per share numbers to the high end of the 33-cent to 34-cent range. Unfortunately, this was third quarter reported Monday morning, which makes the fourth quarter softer than expected. Earnings will only be 9 cents to 10 cents, so there was a pull forward into Q3. Also, revenue will only be higher by 2% rather than the 3% to 4% projected.
So, while we see stronger gross margins, there's not much in the way of growth and accounting issues hanging over the company's head. That's a no from me, dog. 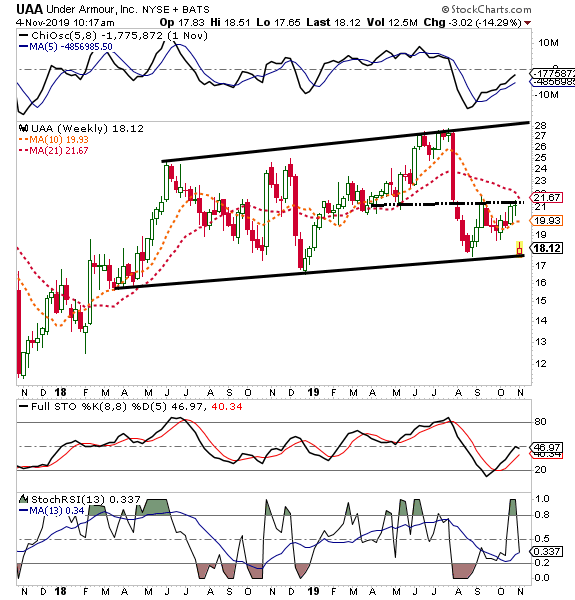 A close under $18 this week breaks a very long support line going back to the spring of 2018. Should that fail, I expect shares to trickle into the $14-$15 range. If Under Armour reclaimed $21.50, likely only to happen if it is cleared by the Justice Department or an activist gets involved, then maybe I'd be interested, but this one appears to be dead money for several quarters at the very least.
Get an email alert each time I write an article for Real Money. Click the "+Follow" next to my byline to this article.
TAGS: Investing | Options | Stocks | Stock of the Day