Now we have the jobs report. I have no idea if it will be market moving, but I do know the bonds had a massive move on Thursday. In mid-October the Daily Sentiment Index for bonds got to single digits and we've done nothing but rally since then.

Sure, there were some bond bulls, but they mostly resided in the Two Year. We heard plenty of folks recommending the Two Year Treasury, but not the Ten Year. But now look at the chart of an exchange-traded fund for bonds, the TLT (TLT) . The move Thursday really stands out, but more than that, it ran smack into the downtrend line that has been in place for a year now.

Everyone talks about the S&P 500, and its downtrend line (this is where it is, 4100) but this line on the bonds is probably more important than the line on the S&P in my view. In any case the DSI for bonds is not extreme but it is now 49 so yes, sentiment has changed. Bonds could probably use a breather but that's the worst I can say about them now.

The other big mover on Thursday was the dollar. In late September as it was making its high, the DSI was in the 90s several times. By mid-October, everyone, including Barron's, was calling for a higher dollar. But the Dollar Index was making a lower high. We discussed it non-stop at the time. And on Monday we looked at it again.

At the time I said I thought we were likely to see the dollar trade between that support around 104 and the broken uptrend line around 110. I wouldn't change that. In other words, I would be surprised if the buck doesn't rally sometime in the next week. This doesn't make me bullish on the buck, just not so bearish anymore.

As for stocks, the only indicator that changed was that the New York Stock Exchange finally saw more than 98 new highs. OK, it was only 104 new highs, but more is more. 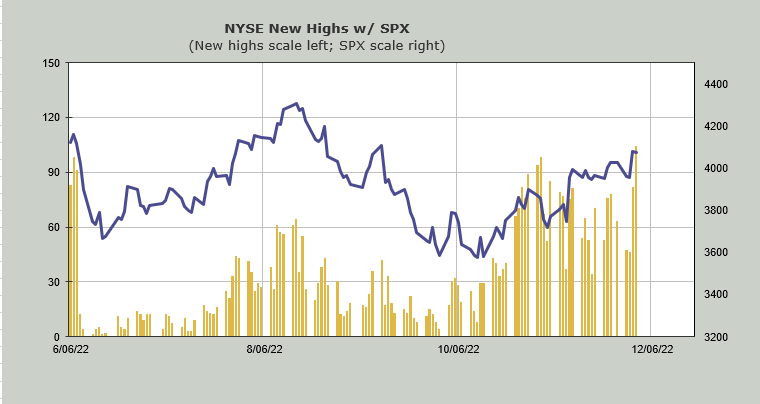 The Volatility Index fell under 20 for the first time since August. The DSI slipped to 15. This means my view remains the same. I think I have no idea what the market does on the jobs number on Friday. I would like it to rally, but the market does not usually care what I want.

I still think, however, the set up for next week is an increase in volatility and as I think the Dow Jones showed us on Thursday, it remains the most vulnerable of the major indexes.

Get an email alert each time I write an article for Real Money. Click the "+Follow" next to my byline to this article.
TAGS: Currencies | Investing | Stocks | Technical Analysis | Bond Funds