By STEPHEN GUILFOYLE Oct 01, 2021 | 10:57 AM EDT
Stocks quotes in this article: MRK, XLRN, BMY, PFE
What a couple of days for Merck ( MRK) .
On Wednesday, Barron's reported that Merck's antiviral drug Molnupiravir appeared to inhibit several major variants of Covid-19, including the Delta variant. Monupiravir, by the way, is collaborative effort between Merck and Ridgeback Biotherapeutics LP intended for use in pill form by non-hospitalized patients showing symptoms for less than five days and at risk for severe disease.
I covered the story in my Market Recon column here at Real Money on Thursday morning, revealing that I was long Merck stock, thought that this drug was potentially huge, and was rooting hard for the company.
Molnupiravir is currently being tested in a Phase 3 trial expected to conclude in November. The reason for the excitement, quite simply, was that an effective therapeutic treatable for outpatient use in oral form would be potentially one way to turn a coronavirus that caused a global pandemic into a manageable endemic virus, almost like influenza.

Shortly after I wrote that column, Merck and Acceleron Pharma ( XLRN) confirmed that the two companies had entered into an agreement where Merck, through a subsidiary, would acquire Acceleron for $180 per share (roughly $11.5B) in pure cash. The transaction is expected to close this year.
It should be pointed out that there is some opinion out there that the deal undervalues XLRN and that Bristol-Myers Squibb ( BMY) currently owns 11.5% of XLRN, so while not expected, a competing bid could be possible.
While it is expected that Acceleron's protein-based therapeutics meant for the treatment of cancers and rare diseases will bolster Merck's stable in that space, Merck CEO Robert Davis pointed out that the acquisition also complements the firm's cardiovascular pipeline by adding "sotatercept," which is a drug currently in late-stage testing for pulmonary arterial hypertension.

Happy October. Suddenly, Merck and Ridgeback have halted patient recruitment for that already mentioned Phase 3 antiviral trial due to positive results. Releasing interim analysis, the data shows that 7.3% of those patients treated with Molnupiravir (MK-4482, EIDD-2801) were either hospitalized or died by day 29. This compares to 14.1% of placebo-treated patients. Taking it to the next fortunate or unfortunate level for a few, through day 29, there were zero deaths reported among the patients treated with Molnupiravir, compared to eight deaths across the placebo group. Hence, why recruitment has been halted.
Appearing on CNBC early on Friday morning, former FDA chief and Pfizer ( PFE) board member Scott Gottlieb said "This is a phenomenal result. This is a profound game changer that we have an oral pill that had this kind of effect on patients who are already symptomatic." Gottlieb explained to the TV audience that the Phase 3 trial ended early because it would be unethical to continue to dose patients with the placebo. Gottlieb also stated that he is optimistic about the safety profile of this drug as patients only need to take it for about five days.
Merck now plans to submit an application to the FDA for Emergency Use Authorization (EUA) as soon as possible, as well as submit applications to other international regulatory bodies. Merck expects to be able to manufacture 10 million doses by the end of this calendar year. The firm already has a deal with the Biden administration to supply the U.S. government with 1.7 million doses.
For those about to ask, Merck is expected to report third-quarter financial results in late October. This obviously will not impact those results but will have to be included in forward-looking guidance. The wall Street consensus view is for earnings of about $1.55 per share on revenue of $12.3 billion. Both would be year-over-year contractions from the comparable 2020 period. 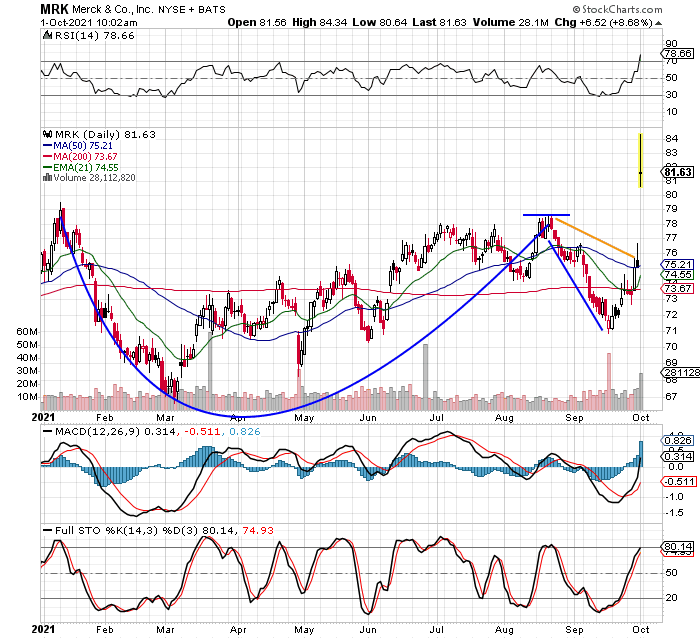 I see two patterns here.
The larger (blue) pattern is an imperfect-looking, year-to-date cup-with-handle pattern, producing a $79 pivot. The second is a very short descending broadening wedge that only goes back about six weeks. The upper trend line is drawn in yellow, the bottom is the cups' handle.
The indicators are all screaming "overbought", but that's more a product of back-to-back days of positive news, and probably Gottlieb's comments.
I am long the stock and I am positive on the name. If one is not yet long, my thinking is that either later Friday or maybe next week, if there is a dose of news out of D.C. that forces a market-wide selloff that the algos will try to close at least part of that gap on the right.
For me, I am in this one for the medium to long term.

Target: $94
Pivot: $79
Panic: $73 (up from $69)
Get an email alert each time I write an article for Real Money. Click the "+Follow" next to my byline to this article.
TAGS: Mergers and Acquisitions | Investing | Markets | Stocks | Trading | Pharmaceuticals | U.S. Equity | Coronavirus

Microsoft to Buy Activision Blizzard: How Traders Can Play It Into Earnings

This confirms why I cast my lot with MSFT CEO Satya Nadella in the first place.