Tuesday was one of those days on the market when you stare at the indexes up nicely and wonder where exactly the rally is.

For weeks I have stated that sentiment was far too complacent, but that it was OK because as long as breadth was holding up and doing well, sentiment could stay bullish.

In the last two weeks there have been some nicks in the breadth readings. First the number of stocks making new lows expanded. I have done something I hate to do, which is rationalize this expansion, because of the time of the year. Then we had some days where breadth didn't keep pace. Then we saw the McClellan Summation Index stall out. But nothing was that glaring.

Tuesday saw the number of stocks making new lows expand. Nasdaq had more than 200. That's an awful lot, especially when you consider that there were only 236 new highs on the day; just over a week ago there were 445 new highs. So new highs are contracting while new lows are expanding. Take a look at the raw data and you can see this it is rare to see new lows expand like this while the indexes are climbing. We saw some of this in early July. 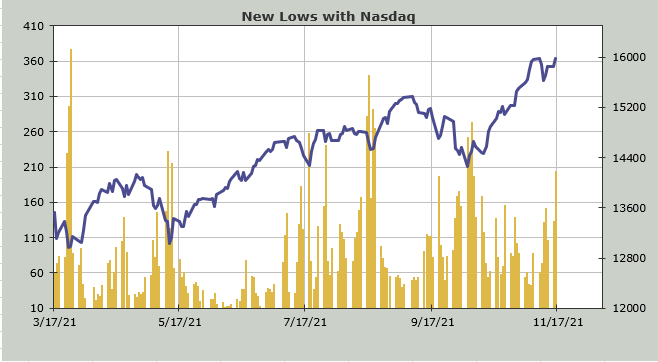 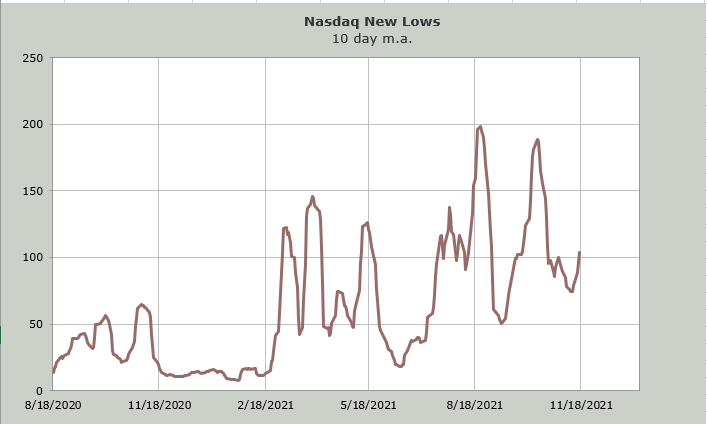 Then there is breadth, which began to diverge a week ago. In the last five trading days the S&P has gained 16 points and New York Stock Exchange breadth has lost 1,600 issues. You can see the divergence on the chart below in the green box. Breadth is touching last week's low while the S&P is touching the high.

It has stalled out the McClellan Summation Index. I could say it has rolled over, but it would take several more days of this type of divergence to see it on the chart without squinting. But the math is that net breadth (advancers minus decliners on the NYSE) would now need a net positive 800 to turn it back up.

I suppose the good news in all of this is that the Overbought/Oversold Oscillator, which is based on breadth is heading back toward an oversold condition.

I will end with a note on the U.S. dollar. It has been quite strong lately. The currency with the largest weighting in the Dollar Index is the euro. There hasn't been the kind of hysteria we usually see when the euro makes a move like this, but I thought I would point out that the Daily Sentiment Index (DSI) for the Euro is at 9.

That top in the Invesco CurrencyShares Euro Trust (FXE) exchange-traded fund for the euro measures to the $104-$105 area, so I'd say dollar bulls should probably expect a correction (dollar down, euro up). Perhaps that helps breadth improve, but something has to change on the breadth front.