While the markets saw some positive action Tuesday, the bounce had only a minor impact on the overall picture. 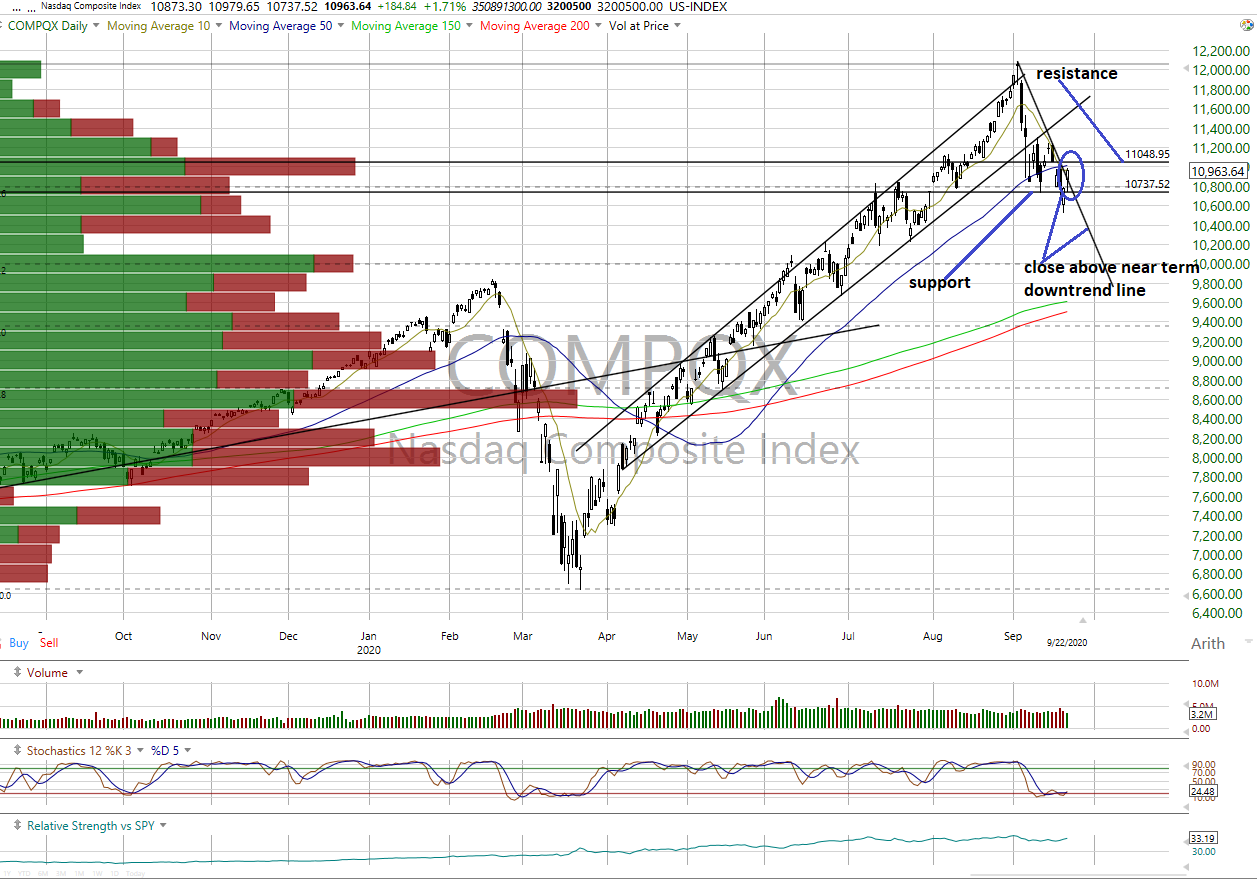 All the equity indices closed higher Tuesday with positive internals although trading volumes were well below the prior negative session.

The only chart events of import were the Nasdaq Composite (see above) and Nasdaq 100 closing above their near-term downtrend lines, resulting in their trends turning neutral.

The rest remain negative except for the Dow Jones Transports staying positive.

We would also note the majority of the indices now have substantial levels of overhanging supply that could prove to be difficult to overcome.

Also, the cumulative advance/decline lines remain negative and below their 50-day moving averages for the All Exchange, NYSE and Nasdaq, suggesting a weak foundation for the markets currently exists.

The one-day McClellan Overbought/Oversold Oscillators remain oversold on the All Exchange and NYSE but neutral on the Nasdaq after suggesting a pause/bounce from the recent weakness (All Exchange: -51.9 NYSE: -67.0 Nasdaq: -39.43).

The Open Insider Buy/Sell Ratio is neutral, dropping to 40.4 while the detrended Rydex Ratio (contrary indicator) remains neutral at -0.19 with the leveraged ETF traders remaining somewhat evenly balanced in their long/short exposure.

This week's Investors Intelligence Bear/Bull Ratio (contrary indicator) continues its bearish signal at 18.36/54.8 that may be the beginning of an important sentiment shift as recently discussed here.

The counterintuitive percentage of S&P 500 issues trading above their 50-day moving averages is neutral at 36.8%.

The valuation gap remains extended, in our opinion, with the S&P 500 trading at a P/E multiple of 22.7x consensus forward 12-month earnings estimates from Bloomberg of $146.16 per share, while the "rule of 20" finds fair value at 19.3x.

While Tuesday's OB/OS levels suggested the bounce that occurred and still implies some slight positive action, the charts remain largely problematic while valuation and advisor sentiment are waving yellow flags. Thus, we are keeping our near-term "negative" outlook for the equity markets intact.

Get an email alert each time I write an article for Real Money. Click the "+Follow" next to my byline to this article.
TAGS: Investing | Markets | Stocks | Technical Analysis | Trading | Indexes