There was so much chatter about stocks on Friday that news of bonds were put on the back burner -- that's kind of amazing considering a month ago the bonds were all anyone wanted to chat about.

That's because the downtrend (in rates) that has been in place since early November would change. Crossing a trendline doesn't signal a change in trend, but rather a shift in trend. Think of it like a growth rate. Earnings are growing at a certain percent -- for this purpose let's say 40% (that's an uptrend line). Then we get a quarter where earnings are growing at 30% -- that's the break in the uptrend line. Is growing at 30% bad? Heck no. But it simply is not the same as growing at 40%.

So crossing the first trendline is a shift. I usually consider crossing the third trend line as the big change, but that's a discussion for another time. For now, I expect a pause in this 2.40% area and would be pleasantly surprised to see a move over that.

As for stocks, the only thing that is new from Friday's trading session is that everything sits right at resistance now. The S&P 500 is not far from the all time high. Nasdaq too, with that big round 8,000 number. The Russell has 1,600 as its resistance. The Transports have been awesome in the last three weeks, having rallied 9% in almost a straight line. But here, too, the spike high at 11,000 from early December looms.

Will getting over these resistance levels push the market from complacent to outright giddy? Likely. Of course, consider how many weeks I expected the Investors Intelligence bulls to get over 55% and instead they hovered just below it. That seems to be what the market does. It spends three or four days each week down or churning, then it has one or two good days. So the churning and down days take the sentiment from going full-on giddy.

Friday saw the put/call ratio at 74%. We have had several readings in the 70s since the rally began but none under 75% (my sign that we've gone far too giddy is under 70%). The last time we had a reading of 74% was Aug. 27. If that date sounds familiar, it's because it's the date the Russell 2000 peaked last summer.

Friday also saw the put/call ratio for exchange-traded funds at 75%, which is quite low. The last time it was lower was Dec. 3, when it was 61%. That was a peak in the market (see that chart of the Transports above).

Finally, take a look at the Citigroup Panic/Euphoria Index, because it notched up this past week. It is not in Euphoria, but it is possible it could get there in the next few weeks. 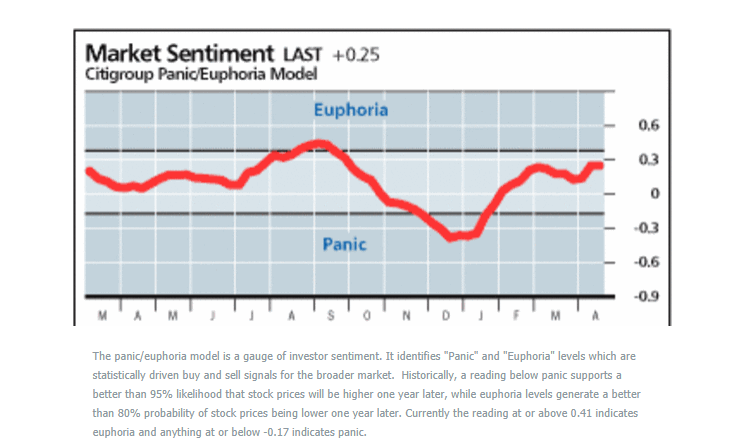 And of course, as always, check out the oscillators:

Get an email alert each time I write an article for Real Money. Click the "+Follow" next to my byline to this article.
TAGS: Investing | Stocks | Trading Strategies |