"In The Mood." The instrumental piece has always been one of my favorites. Such a catchy little ditty.

Kind of makes me think... very difficult. Difficult to look at a five-minute chart of really any major domestic large-cap equity index over the past few days (The Nasdaq Composite makes a nice appearance) without hearing that Glenn Miller classic.

It was the age of "Swing," a special kind of "Jazz." It was a time of great uncertainty, a time when uncommon valor had become more a requirement, and less than something extraordinary for common folk. Or even not so common folk. Glenn Miller was already a highly successful jazz musician by the late 1930s. He was, at that time, what we would now refer to as a "pop star." He was a radio favorite at a time when radio and newspapers were about all there was.

In 1942, with a nation now involved in a two-fronted global war, Glenn Miller at the age of 38, tried to enlist in the U.S. Navy. The Navy was not recruiting older males just yet, and turned down his request. Undaunted, he then used his influence and his friendship with a U.S. Army Brigadier General to get the Army to permit him to serve.

Long story short, Miller reported on Oct. 8, 1942, and was assigned to the U.S. Army Air Corps (forerunner to the U.S. Air Force). He was placed with the newly formed Army Air Forces Band. Nice, safe behind the lines job, for an older, well-known musician, right?

A plane was lost over the English Channel in December of 1944 with Glenn Miller aboard. Shot down? Crashed? Unknown. A "celebrity" making $15K to $20K a week prior to the war at an advanced age, not only volunteered for service at a time of national need, but refused to take "no" for an answer when rejected by the branch of service that had been his initial choice.

It was the age of "Swing." What appeared to be an age of uncommon valor ultimately became a time of common virtue.

Pay the ferryman? Wrong. Don't fight the Fed. Why? Simple. That's how traders get hurt. That's how investors who know that they're right, end up wrong.

Remember our tree, or our "capital flow chart" if you will? We start out with earnings growth or lack thereof. That relies upon economic growth... or lack thereof. At the bottom, we have valuation, but before we get that far, we have to run through the gauntlet of such economic wonders as "ease of commerce," "velocity of money" and sentiment. Oh, joy.

That all seems so linear. So logical. We can do this. Right? Except for one (or two) hard-to-factor impacts that hit the model from the oblique, so you do not necessarily, or correctly price them in each and every time. You know what I'm referring to. Policy. Monetary? Fiscal? Both? Working in unison? Yes. Pulls forward performance. Pushes out liability. Significantly altering valuation.

Readers know that just last week, at Market Recon, we wondered just when the Fed would get busy purchasing corporate debt. Other than through ETFs.

On Monday afternoon, the Fed swung the whole marketplace from "deep in the hole" to green arrows on news that the central bank was now ready. The day of the Secondary Market Corporate Credit Facility, my friends, is today, but that's not all. The Federal Reserve is deploying a $250 billion lending program that will buy outstanding corporate bonds that will include companies that were investment grade prior to March 22, and not including securities bearing maturities greater than five years. The Fed's portfolio will be composed, based upon their own customized, broad, diversified corporate debt index.

The Fed will also launch a $500 billion program targeting newly issued corporate debt. The two programs will be backed against potential losses by an aggregate $75 billion provided for by the U.S. Treasury Department.

Almost quietly, as financial markets reacted to the above news with a frenzy of "buy" orders, the Federal Reserve also launched the $600 billion "Main Street Lending Program," which will provide for small to mid-sized firms negatively impacted by Covid-19, a method for bridging financing. Too large for the PPP program? Too small to enter corporate debt markets as an issuer of significance? This is where that help is. The catch? Unlike with PPP, these loans are just that. Loans. There is no provision for forgiveness.

Don't forget, Fed Chair Jerome Powell heads to Capitol Hill this morning. Will there be an effort to sound more upbeat on the nation's economic battle with the pandemic? We'll know soon enough. Retail Sales in just a bit. Hello Larry.

Who? President Trump and congressional Democrats. What? Really? Really.

Are we worried about tensions blowing up once again between North and South Korea? Not today. How about an actual firefight between Chinese and Indian soldiers? Nope, not now? You guys do know the Chinese Air force flew some fighters over Taiwan's airspace the other day, right? Um, we have protesters in the streets and there's no baseball.

What we do have is an administration that wants to show you how much money they can throw at the economy, and an opposition party that plans the same. They both want to build, build big, and put all of you back to work. Are they allies? Are they pals? No. If it all works out in the end, both sides will take credit. If it all fails miserably, both sides will cast blame. This is what they do. This is why I, personally, cherry pick where I stand on various issues. Nothing more.

All that said, The Trump administration is now preparing a $1 trillion infrastructure spending package that will focus on roads, bridges, airports, 5G technology, and pushing out broadband to rural areas.

You'll recall that the House just earlier this month revealed their own $500 billion, five-year infrastructure building proposal. All I know is that both sides are playing the same game, maybe for their own purposes, but the same game.

Had to chuckle. It seems that The Academy of Motion Pictures will now hold the 93rd Oscars ceremony next April 25 instead of Feb. 28. Honestly, I had no idea that they even still held the Oscars. No one I know has mentioned them in years. Could not believe it made the news.

The news has been flowing over recent days. For Raytheon Technologies (RTX)  -- $37.4 million for early warning sensors from the Defense Advanced Research Projects Agency (DARPA) for the Blackjack program; $202.6 billion to provide support to the U.S. Air Force, including engineering services as the branch moves to modernize radar depot activation as part of the Air Force effort to upgrade its fleet of Boeing (BA) F-15 fighter aircraft. That's right. The Eagle drivers are younger now, or actually they're the same age, we're just older. The Eagle, though? The Eagle is still up there.

That brings us to Stormbreaker, a smart weapon that permits U.S. fighter craft to use poor weather or dusty conditions as cover, features a tri-mode seeker that allows the weapon to still receive guidance from the craft even in the poorest of conditions, and still wind up directed on target.

The F-15 Eagle had been the first platform to successfully add Stormbreaker. This week, the weapon was integrated successfully onto the F/A-18 Super Hornet (also Boeing), and next up will be Lockheed Martin's (LMT) F-35 Joint Strike Fighter. 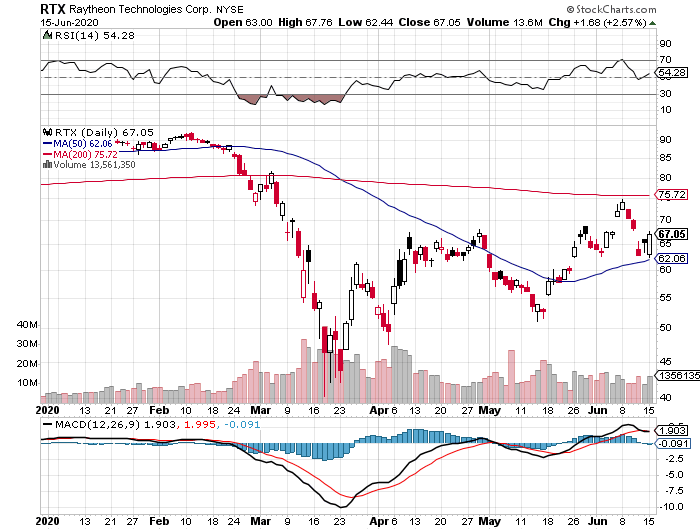 Notice the "trampoline" effect as shares of Raytheon grazed the 50-day simple moving average on Monday. My thought is that this name may end up trapped within the confines of that 50-day SMA and the already once tested 200-day SMA to the upside. The shares will break one way or the other.

I am biased when it comes to this industry, but with fiscal support being thrown around, with the Koreas squabbling again, with China and India skirmishing, defense budgets cannot be cut responsibly. At least that's my opinion.

Get an email alert each time I write an article for Real Money. Click the "+Follow" next to my byline to this article.
TAGS: Federal Reserve | Investing | Markets | Stocks | Trading | U.S. Equity