Whether or not you believe in seasonality, stocks performed pretty well on Tuesday. The SPDR S&P 500 ETF (SPY) traded beautifully, holding above the session's volume-weighted average price VWAP for all but the first 30 minutes of the trading day. I mentioned on Tuesday that the bulls still must contend with the 200-day simple moving average (SMA), but that aside, the setup still looks suitable for additional upside.

On the stock side of things, I see a lot of charts that look nearly identical. Take Intel (INTC) , for example. 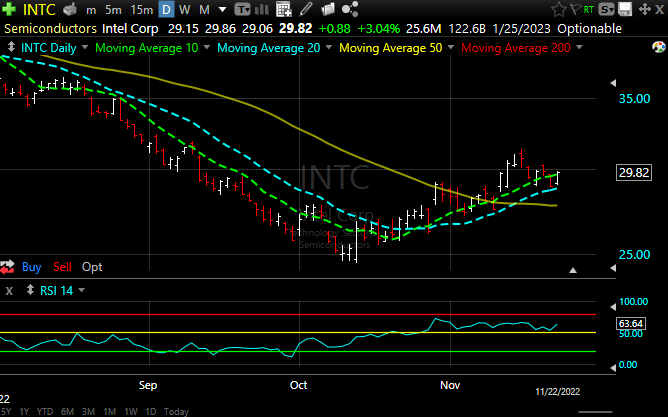 While Intel is still in a long-term downtrend, we've got price above the short-term 10-day and 21-day exponential moving averages (EMAs), above the 50-day SMA, and the 14-period Relative Strength Index (RSI) hanging strong above 50. You can criticize Intel on its technology and consistently crummy earnings all you like, but from a trading standpoint, the stock is doing OK.

I'm long Intel, but not because I think it's an incredible long-term technology innovator. Much like my reason for buying the iShares 20+ Year Treasury Bond ETF (TLT) in late October, I began buying INTC when the RSI approached single digits and sentiment turned so bad that the folks on the CNBC morning shows proclaimed it DOA.

But here's the thing. You can find patterns similar to the one on INTC on plenty of other tech stocks, and other stocks, too. The patterns on Unity Software (U) , gold miner Newmont Corp. (NEM) and, yes, TLT, are all pretty much the same. After a decent rally, price consolidates against the 10-day and 21-day EMA, the RSI holds above 50, and another buying spurt comes in.

Investment timeframes aside, the current rally will likely fail. Sure, we might continue higher or chop around in a horizontal channel for another few weeks. Still, by late December or early January, I expect folks to begin focusing on earnings estimates being too high. With that in mind, whether you trade something such as INTC or something significantly stronger such as First Solar (FSLR) or Gilead Sciences (GILD) , if you haven't identified a protective stop, consider using that 21-day EMA as your dynamic profit stop.

I'll be on vacation until next Tuesday, so enjoy your time with friends and family this Thanksgiving and I'll see you back here next week.

Get an email alert each time I write an article for Real Money. Click the "+Follow" next to my byline to this article.
TAGS: ETFs | Index Funds | Investing | Stocks | Technical Analysis | Treasury Bonds | Metals & Mining | Semiconductors & Semiconductor Equipment | Real Money