By STEPHEN GUILFOYLE Nov 18, 2022 | 07:29 AM EST
Stocks quotes in this article: NVDA, AMAT, WSM, FL
All your heroes gave died and left you to
Rise from the ashes and live for today
Can you take it all
When we're standing tall
We don't need a wall built around us
Jump into the flame
One and all the same
We won't feel the pain
Thick is the skin, thick is the skin - yeah !

The Optimistic 'Down' Day

Really. There wasn't much to whine about on Thursday.

Sure, I heard the talk. I saw the posts on social media. I get it. A number of us have been burned a few times and will continue to believe that this is a bear market rally for some time, and to be honest, It might very well be. That said, I do not see an overt contraction in economic activity for a number of months. The inverted Treasury yield curve seems to agree.

The Ten-Year/Two-Year yield spread has been persistently inverted since the very beginning of July, so we're working on our fifth month there. However, the Ten-Year/Three-Month yield curve, which is the far more reliable indicator of coming hardship of the two, has only been persistently inverted for about a month. That could put the onset of recession -- not the minor recession of the first half of 2022, but one that broadly hurts the populace -- in the second quarter of 2023.

Markets will hem and haw until then. To hold one's nose and not participate because one feels that this rally will not last? Well, that's just leaving quite a bit of coin, real coin, the kind that pays bills, on the table.

I heard some (to remain unidentified) "market strategist" on Bloomberg Radio say that they were considering tiptoeing back into markets now, but were still very high on cash. I almost drove off of the road. I said to my wife that this strategist needs a subscription to Real Money. We gave the green light a month back.

I could not imagine a "financial professional" having missed so many signals. This is when you make your hay. I already have been taking profits on round one of this rally. I am trying to figure out if there will be a round two and what it will look like. Rest of the year? I certainly see that case. You can always make sales when the market turns. It's not like once broadly net long, one is married for life. These kids...

Send in the Clown...

A number of Fed officials spoke publicly on Thursday. Many steered clear of making statements or expressing opinions on policy as most have done so recently. I do miss the days when we hardly heard from the Fed. Now, many among them seem to crave attention despite their collectively poor track record in projecting broad economic outcomes and in steering the US economy around poor road conditions (often of their own creation or at least reflective of their participation as federal enablers) in a timely manner.

St. Louis Fed President James Bullard, never one to be shy in front of cameras or a microphone, has been one of the more hawkish Fed officials throughout this cycle. What's perplexing is that Bullard is no perma-hawk. His professional history is littered with reversals on opinion in regards to policy, and that is one of the things that I tend to appreciate about him. He is often pragmatic, certainly not an ideologue. It appears that Bullard suddenly has taken to adhering to the "Taylor Rule," which is something I thought the Fed gave up on a long time ago.

The Taylor Rule implies that when inflation rises, real interest rates need to be increased as well. The belief is that nominal rates need to be increased by more than a one-to-one basis in order to prevent inflation from becoming unstable. What Bullard said on Thursday was, "In the past, I have said 4.75% to 5% (as a potential terminal fed funds rate). Based on this analysis today, I would say 5% to 5.25%. That's a minimum level. According to this analysis, that would at least get us in the zone."

Bullard went on with a presentation, showing charts that themselves imply that the fed funds rate would need to be between 5% and 7% to be "sufficiently restrictive" to curb inflation. Now, the formula for determining the Taylor Rule is quite complex and is the brainchild of economist John Taylor, who refined the equation in 1993, and more or less assumes an equilibrium fed funds rate 2% above inflation (I use a projected four-quarter average of Core PCE -- Personal Consumption Expenditures -- inflation).

Remember, the Fed has often discarded use of the Taylor Rule in the past when it suited its collective purposes, so it does seem odd to cling to its use suddenly just when the economy appears to have turned a corner on inflation and the slope of the Treasury yield curve screams "recession." That said, if I were to adhere to this rule, which I do not, and I plug in my values/projections, my (because there are a number of ways to modify) Taylor Rule result would call for a fed funds rate of 6.54%, so I do see where Bullard is coming from. I do get his mathematics.

I just disagree, as I understand, or at least I think I understand, that the application of policy to economics is art and not science. For science demands that all experiments conducted using the same inputs must always produce the same outputs. Experiments in economics can never, ever consistently produce the same outputs as the primary inputs are always measures of ranged human response to conditions of surplus and scarcity. Duh.

Though equity markets reacted badly at first to Bullard's remarks and presentation, there were enough positives to take away from Thursday's regular trading session to put traders and investors at ease overnight.

For one, equities rallied hard into the close. Despite being much lower earlier, the S&P 500 gave up just 0.31% for the day as the Nasdaq Composite lost 0.35% and its higher tech sibling, the Nasdaq 100, surrendered just 0.19%. That's because the Philadelphia Semiconductor Index popped for a gain of 1.05% in response to Nvidia (NVDA) earnings and ahead of what would be a positive-looking quarter posted by Applied Materials (AMAT) .

... The Nasdaq Composite, perhaps even more impressively, rebounded off of its 50-day simple moving average (SMA) as if bouncing off of a trampoline. 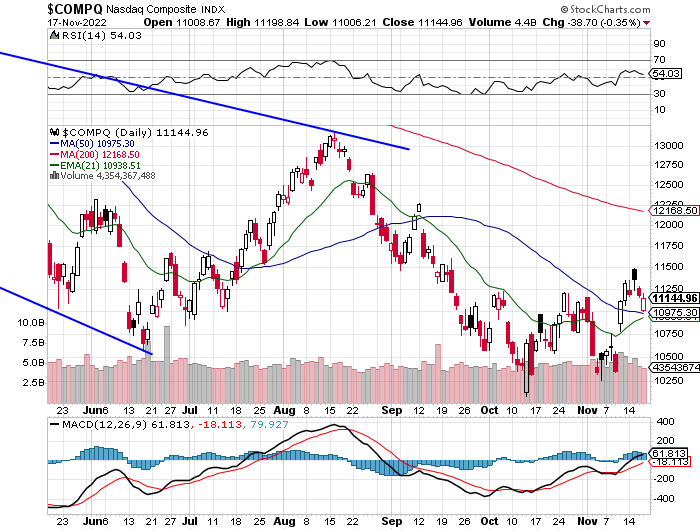 That late action was very positive. So was the trading volume. Once again, aggregate trading volume, be it composite NYSE trade or composite Nasdaq trade, continues to dwindle on "down" days. Losers beat winners by a little less than 2 to 1 at the New York Stock Exchange and by about 7 to 4 at the Nasdaq, yet trading volume that had already been fairly anemic on Wednesday contracted another 2.7% for NYSE listings and another 5% for Nasdaq listings on a day-over-day basis. Put plainly, there is very little professional distribution. The pros ain't selling "squat" on these down days, gang.

Why isn't everyone talking about this? Because they have forgotten how to take the market's temperature. "They" all either think super long term, which greatly reduces one's chances at being second-guessed, or they just day-trade, which is (sometimes) fun and requires great skill and focus in minute-by-minute pattern recognition, but absolutely no directional conviction.

Talk about silly. Williams-Sonoma (WSM) reported a slight miss on adjusted earnings per share Thursday night on a slight beat on revenue. The specialty household products retailer had positive operating cash flow despite gross margin rates that dropped 220 basis points from last year. Not a great report. Not awful in the least in this environment. Yet the stock is down 5.7% overnight in an otherwise green-looking overnight tape. Why? Guidance? Yes, in a way.

Williams-Sonoma reiterated fiscal 2022 guidance of mid to high single-digit revenue growth and operating margins in line with fiscal 2021. So what's the problem? This line: "Given the macro uncertainty, we will not reiterate or update our guidance through fiscal year 2024."

Readers may recall that three months ago, Williams-Sonoma projected "increasing revenues to $10 billion by fiscal year 2024." Hmm. Guess that was just a bit of hubris. I mean, who goes out further than they have to on guidance coming out of a pandemic and probably heading into a recession knowing full well that the Fed is tightening monetary policy? I guess WSM CEO Laura Alber, that's who.