Let's go online and order up some charts of DPZ.

In the daily bar chart of DPZ, below, we can see some recent big price swings. DPZ gapped sharply to the upside in February and then slowly filled the gap and more over the next few weeks. DPZ briefly touched the rising 200-day moving average and then rallied again to even cross above the 50-day moving average line.

The movement of the On-Balance-Volume (OBV) line has been positive. The OBV line has been in an uptrend the past year and over the past two months it hardly dipped suggesting that the pullback from the gap up was not heavily sold by investors. The longs stayed with their positions.

The Moving Average Convergence Divergence (MACD) oscillator has crossed to the downside for a take profits sell signal but it looks like it will not generate an outright sell signal by crossing below the zero line.

In the weekly bar chart of DPZ, below, we can see that the recent upside strength was a breakout from a large $300-$225 consolidation pattern. The pullback to the rising 40-week moving average line was similar to the quick retest of the 200-day line on the daily chart above.
The weekly OBV line shows some downward movement but it looks like it has started to firm again. The MACD oscillator on this longer time frame has begun to narrow but still remains bullish.

In this weekly Point and Figure chart of DPZ, below, we can see a big up and down swing in prices but the chart shows the potential of the large consolidation pattern with a longer-term price target around $600. 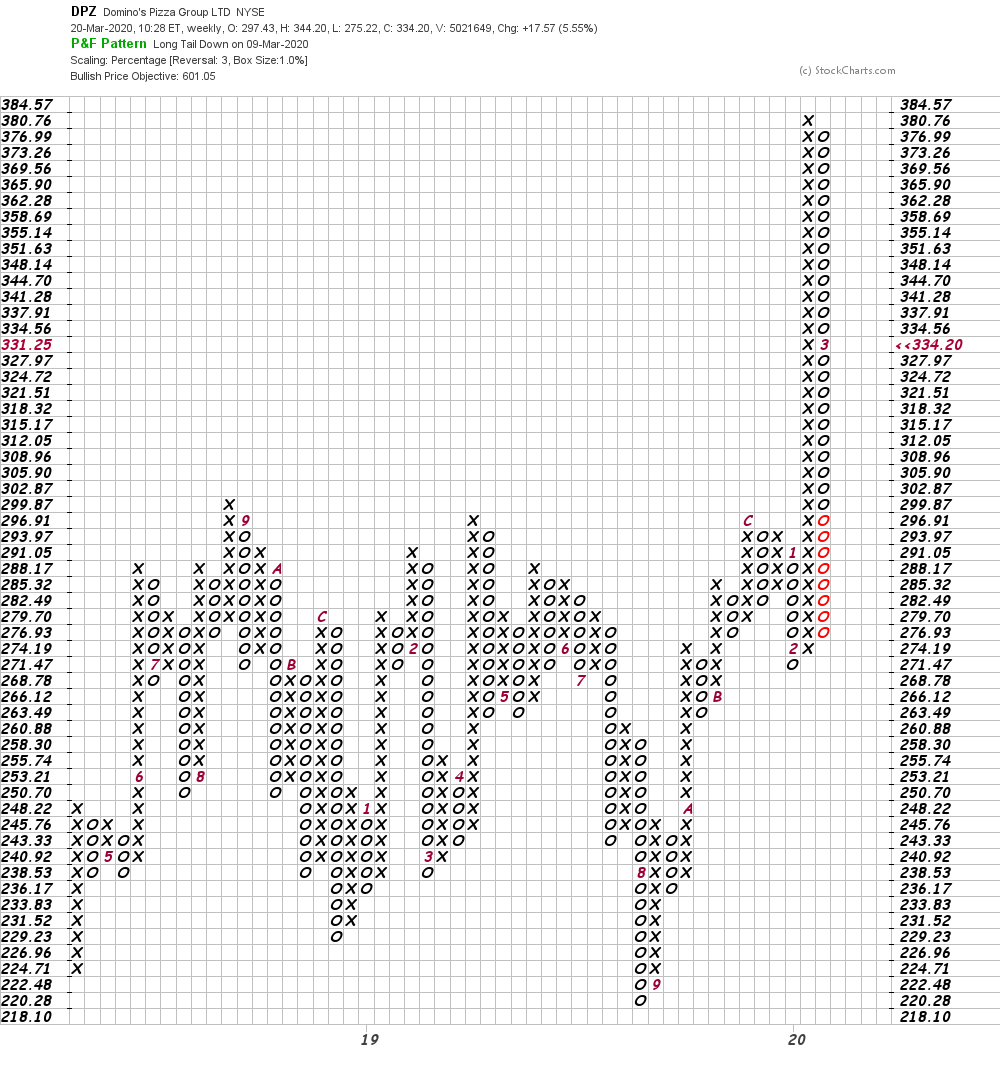 Bottom-line strategy: I have not (yet) ordered from Domino's but that day could be coming soon. The current chart picture of DPZ is positive but traders may need to risk below $300 in this current volatile environment.
Get an email alert each time I write an article for Real Money. Click the "+Follow" next to my byline to this article.
TAGS: Investing | Stocks | Technical Analysis | Food & Drink | Restaurants | Mad Money