During last Friday's "Mad Money" program on CNBC host Jim Cramer looked ahead to some key earnings reports this week. On Tuesday Cramer will be following earnings from Domino's Pizza Inc. (DPZ) . Domino's is suffering from a mountain of delivery competition backed by venture capital. Let's see if that competition has been impacting the charts and indicators.

In this daily bar chart of DPZ, below, we can see a mostly sideways to lower trading range the past 12 months. Prices have been trading around the mostly declining 50-day moving average line and below the negatively sloped 200-day moving average line. The On-Balance-Volume (OBV) line has been declining from May and tells us that sellers of DPZ have been more aggressive the past five months or so. The trend-following Moving Average Convergence Divergence (MACD) oscillator is barely above the zero line, telling us that there is little strength to this trend, and we are close to moving below the zero line for an outright sell signal.

In this weekly bar chart of DPZ, below, we can see a topping pattern playing out from last June. Prices are below the declining 40-week moving average line. The weekly OBV line shows itself in a decline from June 2018 and the MACD oscillator also peaked back in 2018 and is in a bearish configuration below the zero line now.

In this Point and Figure chart of DPZ, below, we can see a potential upside price target of $286 projected, but much closer we can see that a trade at $236.17 will probably weaken this chart. 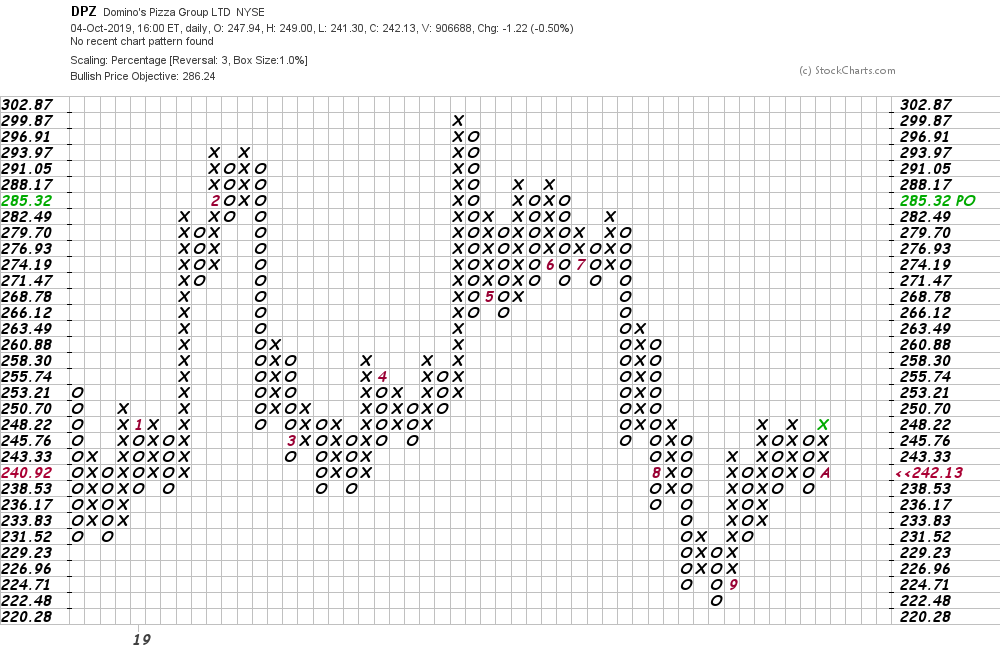 Bottom line strategy: Our three charts are mixed. The weekly chart shows a large topping pattern but the Point and Figure chart suggests that a rally is possible. With no special knowledge of Tuesday's earnings numbers I would be prepared for a move lower. I am not saying that DPZ is a short, but I would not recommend a long position at this juncture.

Get an email alert each time I write an article for Real Money. Click the "+Follow" next to my byline to this article.
TAGS: Investing | Stocks | Technical Analysis | Consumer | Food & Drink | Restaurants | Mad Money | Real Money | Earnings Preview