Audio streaming and media service provider Spotify (SPOT) reported its first-quarter numbers Thursday morning. Results for the Europe-based firm were "iffy," and that's how Wall Street is treating the stock.

Spotify reported a GAAP loss of EUR0.25 per share, but beating consensus by impressively. Revenue generation for the period landed at EUR2.15 billion, in line with expectations and good for year-over-year growth of 16.2%.

While those numbers look to be OK, some of the numbers within do not. Let's explore.

Total monthly active users (MAUs) printed at 356 million, which was good enough for growth of 21%, and within the firm's own 354 million to 364 million guidance. That said, Wall Street was a little above 360 million on this metric, so this is being viewed as a miss. Ad-supported MAUs printed at 208 million versus the 210 million that investors were looking for as well. Premium subscribers increased 21%, which is more than solid but just in line with estimates.

One specific metric that I think really struck traders was average revenue per user (ARPU). This number contracted 7% for the period, landing at just EUR4.12 due to discounted plan offerings.

Moving ahead, Spotify offered guidance for both the second quarter as well as the full year.

For the second quarter the company expects revenue land in a range spanning EUR2.16 billion to EUR2.36 billion, around the Wall Street consensus of EUR2.27 billion, which is just above the midpoint and would amount to year-over-year growth of 11%, if realized.

Spotify looks for total MAUs of 366 million to 373 million, and total premium subscribers of 162 million to 166 million, reflecting growth rates that might not be exactly what growth investors expect, not to mention what they'll pay for. Gross margin is expected to fall back into a 23.6% to 25.6% range, while operating loss ends up anywhere from EUR-54 million to EUR-134 million.

As for full-year 2021, the company expects to do even less to impress. Spotify lowered its projected MAU range to 402 million to 404 million, due to the soft rate of growth for the past quarter. However, it does see premium subscribers rising to 172 million to 184 million, and revenue advancing to EUR9.11 billion to EUR9.51 billion, which is an increase in guidance. Spotify also sees full-year gross margin improving to 24% to 26%. Unfortunately, operating loss is still projected at EUR200 million to EUR300 million.

I have only seen one analyst react to this release. Jessica Reif Cohen of Bank of America Merrill Lynch, rated at three stars by Tip Ranks, has reiterated a "buy" rating with a $428 price target. However, Mark Zgutowicz of Rosenblatt Securities, rated at five stars, reiterated his "buy" rating Tuesday ahead of the numbers with a $425 price target.

I don't see it. A global company based in Europe not hitting targets during a time where many economies are, or have been locked down?

This is streaming entertainment. Are you going to do better when folks are out and about, going to work and doing everything that they used to do? I seriously have doubts.

It's not like the product is superior and there is plenty of extremely well-funded competition. My wife and I both started out on Spotify when streaming music became a thing. We have both moved on. I now listen to Amazon (AMZN) Music, which I prefer, and my wife returned to Apple (AAPL) Music as she was always a big fan of iTunes back when people actually bought music. 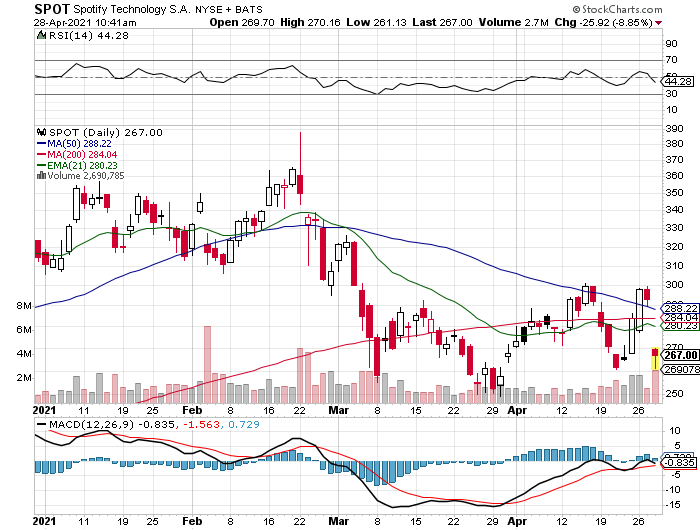 This chart has problems.

The lone positive? The gap created Wednesday morning has a chance, as I always preach, to eventually fill as gaps usually do. That said, Relative Strength is doing a nose dive, and the daily Moving Average Convergence Divergence (MACD) is poised for a bearish crossover. That's not the worst, though.

The worst is the fact that Wednesday's morning's selloff has violated all three of my most focused upon moving averages.

Down goes the 21-day exponential moving average (EMA), and with it the swing traders.

Down goes the 50-day simple moving average (SMA) and with it the portfolio managers whose risk managers will demand action on such an occurrence.

Down goes the 200-day SMA, and with it the portfolio managers who might have toughed it out had at least one of these averages held.

This is a company that does not make money, is not growing quickly, and up against deep-pocketed competition. Other than that the outlook is rosy.

Would I buy this stock? Not with your money. Even if I didn't like you. Nothing but risk.

(Amazon and Apple are holdings in Jim Cramer's Action Alerts PLUS member club. Want to be alerted before Jim Cramer buys or sells these stocks? Learn more now.)

Get an email alert each time I write an article for Real Money. Click the "+Follow" next to my byline to this article.
TAGS: Earnings | Fundamental Analysis | Investing | Markets | Stocks | Technical Analysis | Trading