What was it, a month ago? Not even. I looked it up.

I am referring to the Merck (MRK) deal or deals with Seattle Genetics (SGEN) . While Seattle Genetics remains an independent company in the wake of those agreements, Merck did become an investor in that firm at a premium while doing what larger pharmaceutical names always do when they need to. They buy potential growth when growth is tough to come by. In Merck's case, its increased exposure to the work that Seattle Genetics has been doing in fighting certain cancers.

This morning, Bristol-Myers Squibb (BMY) moved toward expanding its cardiovascular portfolio through the announced acquisition of MyoKardia (MYOK) for $13.18 billion. For those of you keeping score, that's $225 per share (in cash).

Now, this is interesting. MyoKardia has long been a money-losing operation, and the losses mounted in 2019 (as well as beyond). One little thing, though. The company just completed a Phase 2 clinical study of new drug candidate Mavacamten. This drug targets patients with hypertrophic cardiomyopathy, which is a heart disease known to cause strokes, and cardiac failure.

The drug was recently dubbed a "breakthrough therapy" designation by the FDA. That potential is what Bristol-Myers is paying for.

Keep in mind that Bristol-Myers acquired Celgene (maker of the cancer drug Revlimid) as recently as last November. Now you understand how aggressive Bristol-Myers is pursuing growth down this avenue.

The Celgene deal itself is expected to be somewhat accretive to financial performance in this, its first year, while synergies expand over three years. It also comes with a pipeline of developing medicines.

This newer MyoKardia deal, to be financed through cash and debt, is expected to close later this year -- so very soon. The deal with MyoKardia is expected to be slightly dilutive through 2022, and then accretive starting in 2023, so this is longer-term thinking.

Is It Too Much?

Define it? The money? At these rates, nobody seems to think so. Integrating MyoKardia before Bristol-Myers is done integrating Celgene? That's a risk.

Anyone on Wall Street who has been through a merger where there were expected synergies knows how well, or how poorly such deals can wind up. Then again, this is not Credit Suisse First Boston / Donaldson Lufkin Jenrette. Anyone with a memory can remember how contentious that was.

These deals have an obvious acquirer and an obvious subordinate and do not provide almost the same exact services to the same exact clients. Still, this is a risk in my opinion, but lack of growth may have been the alternative, or competition for this name from other big pharma names. That said, I will take aggression over inertia. Although this is expensive. 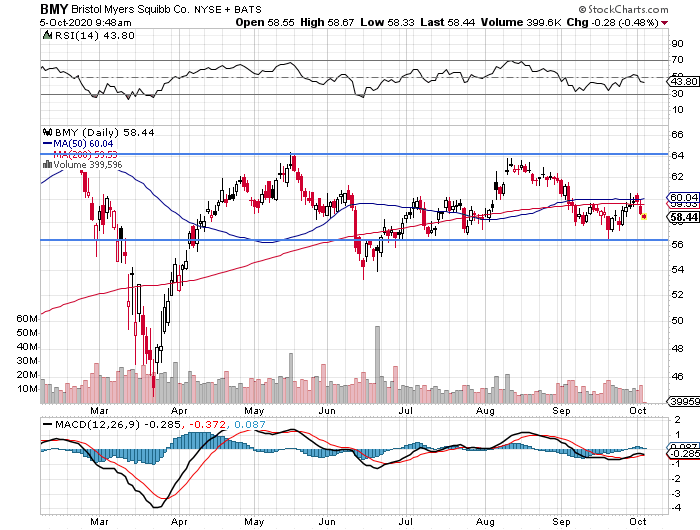 BMY has clearly been in a basing pattern since early summer. The pivot is obvious, up at the $64 level. Support just as obvious, just above $56. Should that line hold, the stock is probably at least technically a buy at these prices.

I am currently not selling puts given the environment. That's a bit of shame because you can get paid roughly $2.50 to take on potential equity risk at the $55 level right now expiring in January.

That means that if you want to play this game, you probably have to buy stock. If one buys 100 shares, one could reduce the expense by selling a covered $65 January call to knock more than a buck off of the investment's net basis. If held for the full year, BMY will pay quarterly dividends of $0.45, yielding 3.1%. In other words, they'll knock another $1.80 off of that net basis for you.

I don't think BMY is a bad investment at these prices, and that dividend may enhance one's book in this coming period of increased volatility. My feeling is that BMY has upside potential (price target) capped at around $76. Of course, first things first. The first target is simply hitting that pivot.

(Bristol-Myers Squibb and Seattle Genetics are holdings in Jim Cramer's Action Alerts PLUS member club. Want to be alerted before Jim Cramer buys or sells these stocks? Learn more now.)

Get an email alert each time I write an article for Real Money. Click the "+Follow" next to my byline to this article.
TAGS: Mergers and Acquisitions | Dividends | Investing | Markets | Stocks | Trading | Healthcare | Pharmaceuticals | U.S. Equity