Right track. With a catch?

Hard to tell, but Abbott Laboratories (ABT) has been central to the expansion of testing for Covid-19 since testing became important. This is what shows the most in the company's third-quarter performance as well as its full-year guidance.

Let's have a look.

For the quarter reported, Abbott Labs reported adjusted earnings of $0.98 per share, beating consensus estimates by $0.07 (FYI, GAAP EPS also beat Wall Street estimates by $0.07.). The company did this on revenue of $8.9 billion, also a solid beat, and good enough for year-over-year growth of 9.9%.

Yes, these numbers are positive surprises, but what really makes them stand out is that this not only returns both earnings and sales to growth after a tough second quarter, they also return earnings to double-digit growth (which had been the trend), and revenue generation to something well above what had been the prior trend.

Medical Devices remains the largest unit, contributing $3.17 billion in global revenue to the whole. This comes out to year-over-year growth of 3.4%, which is solid because that unit is still down (even with this growth) year over year for the first nine months of the year. The real strength in Medical Devices has come in Diabetes Care, particularly within the U.S., while a number of lines such as Rhythm Management and Vascular have continued to struggle.

Remember, CEO Robert Ford has only held the post since March (some timing), and at that time had mentioned the intention to refocus on Medical Devices and Diagnostics. I guess he knew what was coming.

Abbott's second largest unit, Diagnostics, contributed revenue of $2.64 billion in the quarter, growing an astounding 38.2% due to the necessity of testing for this awful virus. The company has now developed seven Covid-19 tests, most recently (announced last week) receiving Emergency Use Authorization (EUA) for its latest rapid test. The U.S. government and governments in general have become large and consistent customers.

Among smaller business lines, Nutrition grew 2.6% to sales of $1.924 billion, and Established Pharmaceuticals kicked in $1.099 billion, declining 9.3%, but just 3.3% organically.

Abbott now guides adjusted full-year EPS to $3.55. This is well above prior guidance of just $3.25 with one quarter to go, and well above the $3.32 that Wall Street was looking for. Vaccines and therapeutics may or may not be on the way. I hope they are, but testing? Testing is here to stay, and still needs to expand.

I live in the state of New York. We screw up a lot of things, but not testing. I have been tested over and over since clinically recovering from the virus itself. One of my sons needed a test for work. The other got one a few weeks back because he did not feel well (both were negative). They both had an answer in 24 hours.

I remain long ABT, though the dividend yield has bothered me for a while. I guess I want more than 1.33% from a company in this business. 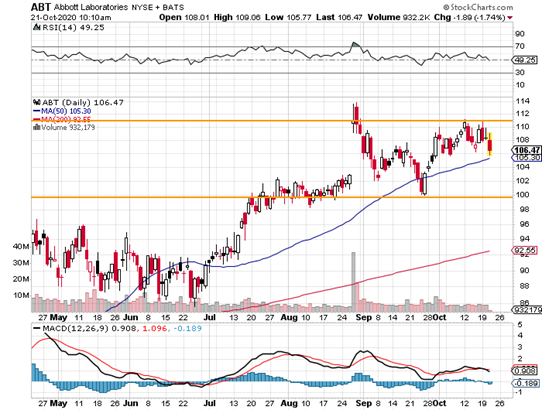 The shares have been basing since August. I see the pivot as roughly $111, the spot twice tested in mid-October already.

My price target remains $119. I do not expect to add on Wednesday morning's dip unless it gets out of control. By that I mean something close to an even $100.

Let's just see if this stock can defend the 50-day line Wednesday afternoon. We do think Robert Ford is the right leader for Abbott, and that demand for what the company does best (diagnostics) goes nowhere but up.

Get an email alert each time I write an article for Real Money. Click the "+Follow" next to my byline to this article.
TAGS: Earnings | Investing | Markets | Stocks | Trading | Health Care Equipment & Services | Healthcare | U.S. Equity | Coronavirus

A 'Simple' Way to Play for the Rally to Resume

I believe we are heading to new all-time highs, potentially this week.