Night falls. Cloud cover. Many years before the invention of night-vision technology. I can still hear that sound. When one spends enough time outdoors, in the American Southwest, one learns how to avoid danger. All the senses become alert. Coyotes? Probably not going to bother you. The snakes? They will react to you. You don't know they are there until they tell you.

That rattle. First time you hear it, your mind races. Then you relax. So, that's a rattlesnake. OK, Mohave Green? Sidewinder? Too dark. Stop. Don't move. Ascertain direction from where the sound is coming from. Move very slowly in the other direction. Problem solved. Worked for me every time. Despite hanging out in swamps, jungles and deserts often enough, especially in my youth, and despite more unwelcome encounters than I can count, (knock wood) I have never been bitten by a snake of any kind.

One night at the "Stumps" (Twentynine Palms) stands out in my memories. It was during a MCCAX (Marine Corps Combined Arms Exercise) back in the early eighties. Radio silence. Small unit (fire team-size) out on our own, trying to make time in order to be in a position to protect a column of tanks set to move out before dawn (this was just a war game). We are on foot as using either a vehicle or chopper would draw unwanted attention. I am the team leader, and setting the pace. Suddenly, that rattle. I stop, with a closed fist. The guys behind me can't see in the dark, so we bunch up way too close to each other.

OK, rattle to the front. Side-step to the left. Rattle. Stop. Side-step to the right. Rattle. Stop. Try to go backwards. Now a rattle from whence we came. Stop. In fact, so many rattles, from so many directions. I can't tell where to lead, and I can't tell how many snakes we are just happening to piff off. Those tanks are not going to wait, and I am way more afraid of my company Gunny than I am of any snakebite.

Everyone, hands on the shoulder of the man in front of you. I kick the sand hard to my front, and toward both ten o'clock and two o'clock. Like a snow plow. We move a few feet. Repeat. Repeat. Repeat. You get the idea. Simply thought that maybe spraying sand a rough 10 feet to our front could clear a forward-moving cone of safety.

Long story short. It worked. Nobody was bitten that night. We got to our ledge before light, where we could see the tanks below, as well as the fake Soviets who were there to ambush them. Targets destroyed. Lay down some smoke to blur any silhouettes the tanks might present in the morning light and get the F outta there. Fake mission accomplished. Get about a "klick" away from where the tanks are. Chopper picked us up after our area was safely back in fake American hands and returned us to our unit.

The day felt more awful than it really was. Sure, markets for the most part sold off. Breadth was poor, as it always seems to be these days. Large-caps moved lower with small- to mid-caps. That seems to be a new trick, but in actuality the Nasdaq Composite has now put together a three-day losing streak. (Note that the 21-day exponential moving average acted as key support on Thursday.) 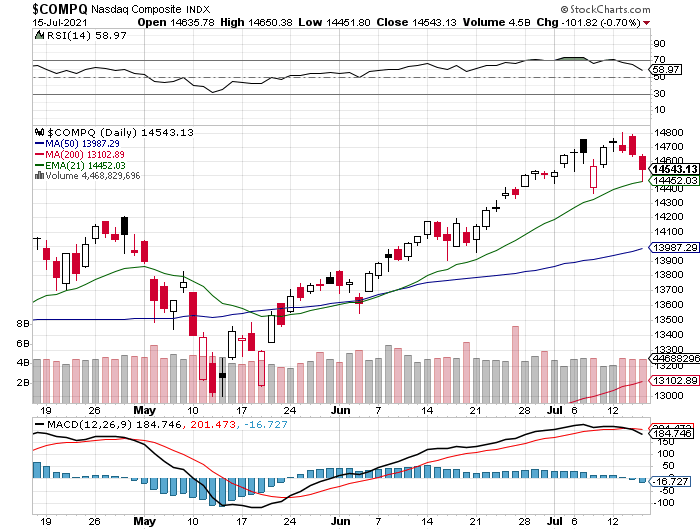 After simultaneously coming well off an overbought Relative Strength Index (RSI) reading and a daily moving average convergence divergence (MACD) that had been looking so strong earlier this week, it now looks like a warning. Rattle to our front. Stop. Side-step to our left.

Federal Reserve Chairman Jerome Powell, now before the Senate Banking Committee, says, "This is a shock going through the system associated with reopening of the economy, and it has driven inflation well above 2%. And of course we're not comfortable with that." Hmm. A dent in the armor? Visible anxiety?

Powell went on: "This particular inflation is just unique in history. We don't have another example of the last time we reopened a $20 trillion economy with lots of fiscal and monetary support. We are humble about what we understand." That may have been honest, but that certainly did not inspire confidence. What it did inspire was some profit taking in some of the most highly valued parts of the marketplace. Rattle. Stop. Side-step to our right.

Los Angeles County announces that residents will be required to mask up while indoors, even if vaccinated, as the number of new COVID infections in the county exceeded 1,500 on Thursday, which was the seventh consecutive day of at least 1,000 new infections. This comes just a month after Los Angeles had lifted its masking restriction.

Nationwide, cases are on the rise, especially in less-vaccinated areas, as hospitalizations even among the young increase. Can schools open as expected this September? Not a soul under the age of 12 is vaccinated, and this Delta variant does not seem to spare younger folks the way earlier variants had. Hence, investors led perhaps by foreign money seeking real yield sought out safety in U.S. Treasury securities. Later in the day, six New York Yankees would test positive for COVID despite at least five of them having been vaccinated, thus forcing the cancellation of Thursday night's game with the Boston Red Sox. Rattle. Stop. Start moving backwards.

Cracks in the resolve of the bipartisan group of senators pushing the $579 million to $1 trillion infrastructure plan began to emerge as the use of increased IRS enforcement became a point of contention. Separately, Sen. Chuck Schumer, de facto Senate Majority Leader in a chamber split 50/50 but where the Democrats hold the tie-breaker in any strictly partisan vote, set this coming Wednesday as a deadline for at least all Democrats to reach an agreement on the massive $3.5 trillion social spending program that came out of committee this week. Right now, the party does not have 50 ducks in a row. Rattle. Stop. Start kicking sand?

President Biden could issue warnings to U.S. businesses operating in Hong Kong ahead of a proposed visit to Tianjin by U.S. Deputy Secretary of State Wendy Sherman. (He already has.) The Financial Times reported last night that Beijing had snubbed the U.S. by not granting the second-ranking person at the State Department a meeting with her Chinese counterpart in what would have been the first meeting between the world powers since that rather embarrassing meeting in Alaska.

The Financial Times has also reported that the U.S. had put a halt to Sherman's visit after she was offered a meeting instead with someone considerably further down the food chain at the Chinese Foreign Ministry. At the same time, the South China Morning Post reported on Friday that China was still preparing to host Sherman in Tianjin later this month. All we know for sure is that Sherman will be visiting Japan, South Korea and Mongolia next week and that this story is still evolving.

1) Moderna (MRNA) is trading about 8% higher overnight coming off of a 5.3% run on Thursday as the stock will be added to the S&P 500 prior to the opening bell this Wednesday, July 21. Moderna replaces Alexion Pharmaceuticals (ALXN) as that name is being acquired by AstraZeneca (AZN) .

2) Taiwan Semiconductor (TSM) took a 5.5% beating on Thursday after beating expectations for profitability and suffering a slight miss on second-quarter revenue. The firm guided sales higher going forward, but the real disappointment was in margin and in the expectations for margin. My thought is that as the planet works its way through this semiconductor shortage and while TSM is the dominant foundry on this planet, that dips should probably be purchased. That's exactly what I did Thursday. The real threat to TSM, in my opinion, comes from mainland China.

3) Speaking about foundries. Intel (INTC) appears to be in talks to acquire GlobalFoundries from Mubadala Investment Company for roughly $30 billion. Mubadala is an investment arm of the government in Abu Dhabi, UAE, but is based in the U.S. This would indeed make Intel a real player in the space. That said, this story could get even more interesting as GlobalFoundries got its start as an Advanced Micro Devices (AMD) spin-off and AMD is still a big client with a multiyear supply deal in place.

4) While we're talking about chips. I exited Nvidia (NVDA) on Thursday morning. By accident. Oh, I meant to make a sale. I accidentally sold it all, and with the stock in free fall at the time I just watched the rest of the day. So far, this was a "lucky" error. I'll write about it when I re-enter. I am not betting against Jensen Huang.

Get an email alert each time I write an article for Real Money. Click the "+Follow" next to my byline to this article.
TAGS: Earnings | Federal Reserve | Investing | Politics | Stocks | Pharmaceuticals | Semiconductors & Semiconductor Equipment | Real Money | Coronavirus