Let's look at the upcoming short-term overbought reading -- and then compare how this market is shaping up to look a lot like last November's.

Using my own Oscillator, which is based on the 10-day moving average of the net of the advance/decline line, we will reach a short-term overbought condition midweek this coming week. If the market is up on Monday, then I expect to see the Oscillator (blue line) will make a higher high than that peak from a week or so ago you see on the chart. It's unclear if we will get a higher peak than early July (arrow on the chart). That will depend on Monday's action.

This short-term overbought reading should lead to a pullback. Because the intermediate-term indicators are not overbought, I expect the pullback will lead to another rally.

That was my expectation back in November 2018, as well. We had had a nice oversold rally off that late October low, and we got short-term overbought in early November (blue arrow). We pulled back a lot more than I had anticipated, as we came all the way back to the prior low (green arrow).

The subsequent rally only made it back to the prior level (red arrow). So the sequence of down and back up was correct, but the outcome was a lot of going nowhere -- so much so that by the time the intermediate-term indicators got overbought in early December (red arrow), we had used up the window for improvement in the market.

I spent the weekend staring at the various indicators from then and now and there are many similarities: the contracting new highs, the lagging transports, and the lagging Russell 2000. Of course there are the intermediate-term indicators, too, such as the McClellan Summation Index -- rising, therefore bullish -- the 30-day moving average of the advance/decline line -- not overbought and bullish -- and sentiment.

So what about the ones that are different? The biggest difference comes in the way of breadth. I have noted that breadth, while it tailed off a bit from its torrid pace late in the week, has made a higher high. I know many will scoff that there are so many bond-related stocks in breadth that you can't trust it, so let's use common stocks only, removing all those bond proxies they call stocks.

The blue box shows November. The chart looks similar to the S&P 500's chart from then. Now look at the green box: It's not the same. Common-only breadth has made a higher high; the S&P has not yet. That's a difference.

The semiconductor stocks also look different. The November rally saw them at a lower high. The August decline saw them with higher lows and now a minor higher high than mid-August. I think short-term the semis are overbought, but the overall picture of the SOX looks different.

Then there is sentiment. The green arrow on the chart of the four-week moving average of the American Association of Individual Investors bears shows where this was in November. It is clearly much higher now, having turned down late last week. 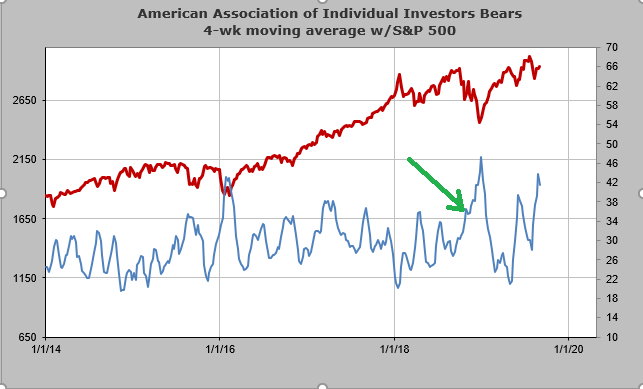 I expect a short-term overbought pullback later this week that I expect leads to another rally, because the intermediate-term indicators are still rising. But I am fully aware that a similar set up existed in November and the result was not bullish.