The bad news keeps on coming for Boeing (BA) .

First, we learned Wednesday that the firm is reportedly in discussions with client airlines about potentially reimbursing them for losses suffered from the Boeing 737 Max's international grounding following two deadly crashes. United Continental (UAL) has already stated that the airline has pulled all of its 737-Max planes from scheduling for the rest of the summer. American Airlines (AAL) and Southwest Airlines (LUV) are also known to be heavily exposed to the model.

Then later Wednesday, Boeing shares became extremely volatile going into the close after word emerged that the U.S. Federal Aviation Administration asked the firm to address a new problem with the 737 Max. The issue is unrelated an ongoing software fix for the 737's MCAS flight-control system that some suspect caused the two deadly crashes.

Hopefully, this new issue will involve simply correcting some software as well. But published reports indicate that BA might have to replace a computer chip in all 737 Max aircraft, including those that the company has already delivered.

The problem for Boeing is that many had expected the 737 Max's recertification flight tests to commence last week. That testing is necessary prior to regulators across the globe giving their blessing for the troubled model to return to the skies.

But obviously, delays to getting these planes back into operation will be more extensive than previously thought. United's recent cancellation of flights that use the 737 Max only run through Labor Day, but the FAA will need weeks to review the 737 Max's recertification tests.

Does this mean you should buy BA on the dip that we're seeing Thursday -- a 2.4% drop as I write this? Not with my money it doesn't.

It's not that I don't believe that Boeing will overcome this current environment -- in fact, I'm sure it eventually will. It's just that the risk/reward ratio doesn't look so hot for retail investors.

It's one thing if you're a hedge fund running $1 billion for a bunch of rich guys. If you lose money on BA, maybe you can replenish it.

But if this is your rent or grocery money, you can't get caught out in the open if more bad news hits. Besides, take a look at this: 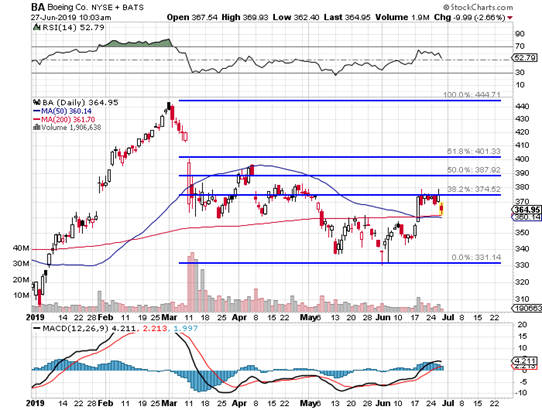 This chart shows that Boeing's June rebound hit a brick wall at the standard Fibonacci 38.2% retracement of this year's beat-down. To me, that says that BA needs a catalyst to get over the $375 level. (The stock is at $365 as I write this.)

To be fair, Friday's G-20 meeting between President Donald Trump and Chinese leader Xi Jinping could provide just such a catalyst. If Beijing needs to make huge purchases of U.S. goods to get a trade deal done, then new Boeing aircraft orders could help accomplish that.

But if you go that route and buy Boeing here, I wish you well. I hope you make a fortune, but personally, I'm adding some Caterpillar (CAT) as my preferred Trump-Xi trade.

After all, I'll lose a lot less money things don't work out at the G-20. Besides, bulldozer accidents usually don't make global headlines the way airplane crashes do.

For now, my advice is to hedge everything, gang.