Late February into mid-March. The economy shuttered by mandate. The immediate repricing of all financial markets as cash flows suddenly disappeared. Unheard of was the increase in the numbers of those unemployed. Incredible was the value placed upon cash, forcing broad sales of anything liquid, and then anything less liquid. Enter the policy makers. We know what they did as the population, by necessity, found themselves in the position of avoiding even family members.
Late March into mid-April. As stunning as the vertical violation of equity market indices had been a month earlier, the speed and momentum of the reversal has been nearly as incredible. The Nasdaq Composite now stands just 13% below a new all-time high. The S&P 500 just 16%. Both have surpassed their "half-way back" points. Both seem to be moving toward 61.8% Fibonacci retracement levels. Retrace what? Retrace the entire global nightmare. That's just the thing. The markets are well ahead of any recovery for the global or domestic public health condition -- and by extension, anything resembling economic recovery.
It is truth that investors have always considered equity prices to be forward-looking. If we are to trust this truth, then we must believe in aggregate that the first easing of social distancing rules now seen being implemented across Europe might go "okay." That means that the re-opening of some retail locations in Italy, the restart of work on some construction sites in Spain, and children getting back into the classroom in Denmark might not (hopefully not) become newsworthy events.
So, are the markets ready for a pause in this dramatic rebound? We are several weeks behind Europe in battling this pandemic. U.S. numbers are far worse, that is true. It is also true that testing has been done more aggressively in hotspots here in the U.S., even if not aggressively enough to truly interpret the breadth of the situation, or even the slope of the many health-related curves now under nearly constant observation.

Very strong day Tuesday. Trading volumes increased from Monday at both the New York Stock Exchange as well as Nasdaq. The tech-heavy Nasdaq Composite ran just less than 4%, while the tech-centric Nasdaq 100 ran even hotter at up 4.3%. Semiconductors and Software names performed in line with the "One Hundred." Of the eleven sectors that comprise the S&P 500, only Energy shaded red for the day, and will have to be watched on Wednesday morning, as for WTI Crude, the $20 support level that had been the battleground of late appears to have broken overnight.
This condition, should it hold into daylight, would, in my opinion make at least one attempt to regain the level, probably prior to North American openings, and upon failure will force broader algorithmic selling upon price discovery. What this means is that there will be some profit taking across industries that maybe have seen a recent lift thanks to the wonders of passive style investment, but maybe do not have active cash flows at this time, and are not currently being cradled in the loving arms of the U.S. Treasury Department. That brings us to the airlines.

Equity index futures are trading well below fair value through the overnight. Not so for many airline stocks, however. The group ran hot on Tuesday, and kept running hot in between the closing and opening bells at 11 Wall Street. Treasury Secretary Steven Mnuchin mentioned Alaska Airlines ( ALK) , American Airlines ( AAL) , Delta Air Lines ( DAL) , JetBlue Airways ( JBLU) , United Airlines ( UAL) and Southwest Airlines ( LUV) by name, among others. All had signed on to participate in the federal government's stimulus (support) program, meaning that these airlines will accept an infusion of cash in order to keep employees on the books and keep their benefits in force, as well.
It is believed the lifeline being thrown the industry at a time where there is no demand for air travel will cost the airlines (beyond headcount) stock warrants on at least a portion of the help being offered (some chance at eventual return for taxpayers), as well as loans that will have to be repaid, plus grants.
The lack of demand for air travel, impossible to place any realistic timeline on, makes one think of the plight of Boeing ( BA) .

It Just Gets Worse

Boeing reports in two weeks. Just what the firm will point toward is hard to say. Certification flights for the 737 Max aircraft to be overseen by the FAA are scheduled for sometime in May. Even if all goes well and the firm is granted certification for it's highly troubled, long grounded, but formerly popular jet airliner, who will buy them?
With the airline industry forced into the position of playing ball with the Treasury Department, one might think that capital expenditure might just slow down quite a bit. Okay, probably more than quite a bit. Boeing announced on Tuesday that customers in aggregate had cancelled orders for 150 737 Max aircraft in March. The firm did have orders for a total of 31 either commercial or military aircraft of some kind for the month, leaving the cancellation rate at a net negative 119. In addition, the firm removed an additional 139 orders for 737 Max aircraft from its order backlog. Hmm.

President Trump spoke from the White House Rose Garden on Tuesday evening. In a move that nearly everyone who pays attention had seen coming, the president announced that the U.S. would halt funding to the World Health Organization, after what he terms as the WHO's "role in severely mismanaging and covering up the spread of the coronavirus." This story is far from over, as the U.S. (easily the WHO's largest sponsor) in the president's words "has a duty to insist on full accountability."

Early on Tuesday morning, both JP Morgan ( JPM) and Wells Fargo ( WFC) stepped to the plate. (By the way, these were the two worst names on my book on an otherwise very nice day.) What have we learned? We learned just how bad (or maybe we didn't?) leadership at these two banks expects the U.S. economy to get, by virtue of the size of reserves now being set aside in preparation for an expectedly sizable increase in the number of bad or nonperforming loans at each bank.
We already know that a rough 17 million Americans have filed for unemployment benefits in just three weeks' time. Tomorrow (Thursday) morning, not a soul will be surprised should that number grow by another 5 million+. We already know that approximately two million households skipped their last mortgage payment. Economists at JP Morgan have revised their expectations for U.S. economic activity for Q2 from a 25% decline (annualized) in GDP to -40%. As for a Q2 Unemployment Rate, these economists have gone from 10% to 20%.
Most economists that I read already believe that as a nation, we are somewhere in between these two levels at this time. This paints not only mortgage payments, but probably auto, student and credit card payments in a very different light.
In response, in order to try to get ahead of the curve... JP Morgan has taken reserves to be set aside for potential defaults up $6.8 billion to nearly $8.3 billion, while Wells Fargo took these reserves up a rough $3 billion to $3.83 billion. Is it enough? I sure hope so. You'll probably hear from quite a few banks this morning for the sake of comparison, prior to even reading this piece.

All You Need To Know

While employers are either reducing headcount en masse or basically being bribed by the Treasury Department not to, there is one giant that seemingly stands alone. Already the industry leader in cloud computing services, enduring a never ending challenge in that space from the likes of Microsoft ( MSFT) , it is Amazon ( AMZN) that has, since the pandemic, really started here in the U.S., made clear the intention to hire 100,000 new employees, and then tacked on another 75,000 to that intention. It's obviously not the streaming music or video services offered by the firm that need the help, though those businesses are likely hot as well.
It's the lower margin, advertisement-driving e-commerce business that has been inundated with increased demand for delivery as folks staying at home have tried to avoid shopping in person, even for the essentials such as pantry items, and groceries. Walmart ( WMT) and Costco ( COST) are going through the same thing -- perhaps at differing levels of scale on a regional basis. The fact is that I really thought about covering Amazon for readers from a charting perspective on Monday, but I thought the shares were trading too far below pivot.
The shares made mincemeat of that pivot point by Tuesday morning and just kept on going. Sure, AMZN is trading lower very early on Wednesday morning, but nobody with a long position is down unless they made an initial entry on Tuesday afternoon. Take a look. 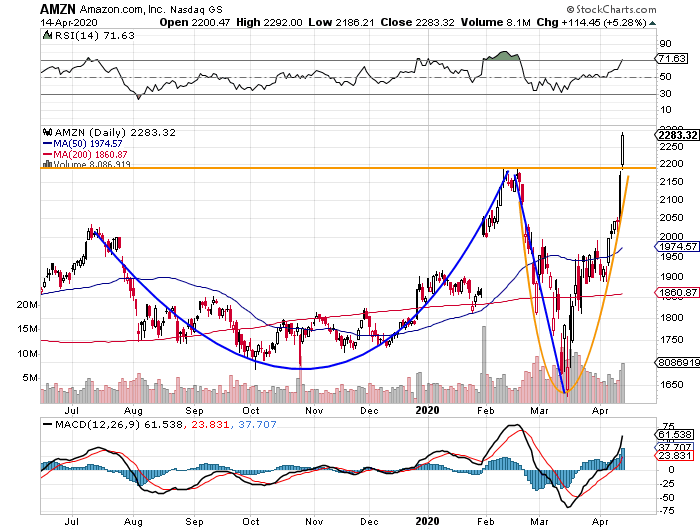 Whether readers see the cup with the very deep handle (in blue), or the cup with no handle (orange).. either way, the pivot is the $2185 level that was approached going into the close on Monday, and was bested coming out of the open on Tuesday. While a retest of that level would not be the wildest thought that any investor has ever had, there are undeniable facts rumbling around in my head. Should a retest add a handle to the orange pattern , the pivot will have to change to the Tuesday high of $2292. That is a horse of a different color for sure, but not negative in any way.
Currently with a pivot of $2185, and I am long the name so this matters to me, my target price for Amazon becomes and astounding $2625. Should we shift the pivot up to $2292, that target will also shift... wait for it... to $2750. My goodness. Guess I'll use the 50-day line of $1974 as a panic, but that would be a haircut, not an out. Oh, the toilet paper finally showed up on Tuesday afternoon. You may have heard the dance of joy from blocks away.