Disney shares were up about 1% before Monday's opening bell after the near-record performance of "The Lion King" live action release over the weekend. The stock of Disney has climbed nearly 28% so far this year, backed in large part by a slew of blockbuster hits.

According to The Associated Press, the new release grossed $185 million in its North American debut, contributing to a 10-day worldwide total of $531 million after opening in China last weekend.

The performance of "The Lion King" makes the movie the ninth-largest opening weekend in North American history, only surpassed by seven Disney titles, largely in the Marvel universe, and by the Comcast (CMCSA) -owned "Jurassic World." (Both DIS and CMCSA are holdings of Jim Cramer's Action Alerts PLUS charitable trust.)

The strong early performance of the film builds on news that "Avengers: Endgame" passed James Cameron's "Avatar" to become the highest-grossing film of all time, now nearing a staggering $3 billion in total take. Considering Disney bought Marvel Entertainment for $4 billion in 2009, that is quite a return on investment.

10yrs ago Disney was IP for girls (and sometimes Jessica Simpson). Iger spent $16b buying Pixar, Marvel and Lucas.

Disney's Cultural Dominance is only obvious in retrospect. W/out Iger no one would be listening to Disney heirs today. $DIS pic.twitter.com/fvf4b0Lmoi

The engagement of moviegoers has led many analysts to revise expectations to the upside for Disney's coming earnings release in early August as the box office strength should boost profits and ripple through to both park visits, merchandise sales and the all-important release of Disney+ later this year.

"We are reiterating our Overweight rating on DIS shares and look to several near-term catalysts as potential drivers for outperformance," J.P. Morgan analyst Alexia Quadrani wrote in a recent note to clients. "These include further outperformance in the Studio segment with the opening of The Lion King this weekend, encouraging data points from the Parks segment as crowd restrictions normalize following the opening of Star Wars: Galaxy's Edge in Disneyland in late May, the upcoming opening at Disney World in late August, the announcement of the next phase of Marvel films potentially at Comic Con in San Diego in the coming days, as well as the awaited opening of sign-ups for Disney+ potentially at D23 in late August."

The record results from the studio are particularly encouraging as comparisons against the "Avengers: Infinity War" results from 2018 were seen as a possible area of weakness heading into the year, with many wondering how the studio could top what was, until "Endgame," the highest-grossing film the studio had produced.

However, with the success so far of "Captain Marvel," "Avengers: Endgame," "The Lion King" and the expectation of more films to come, the segment looks to be iron clad. 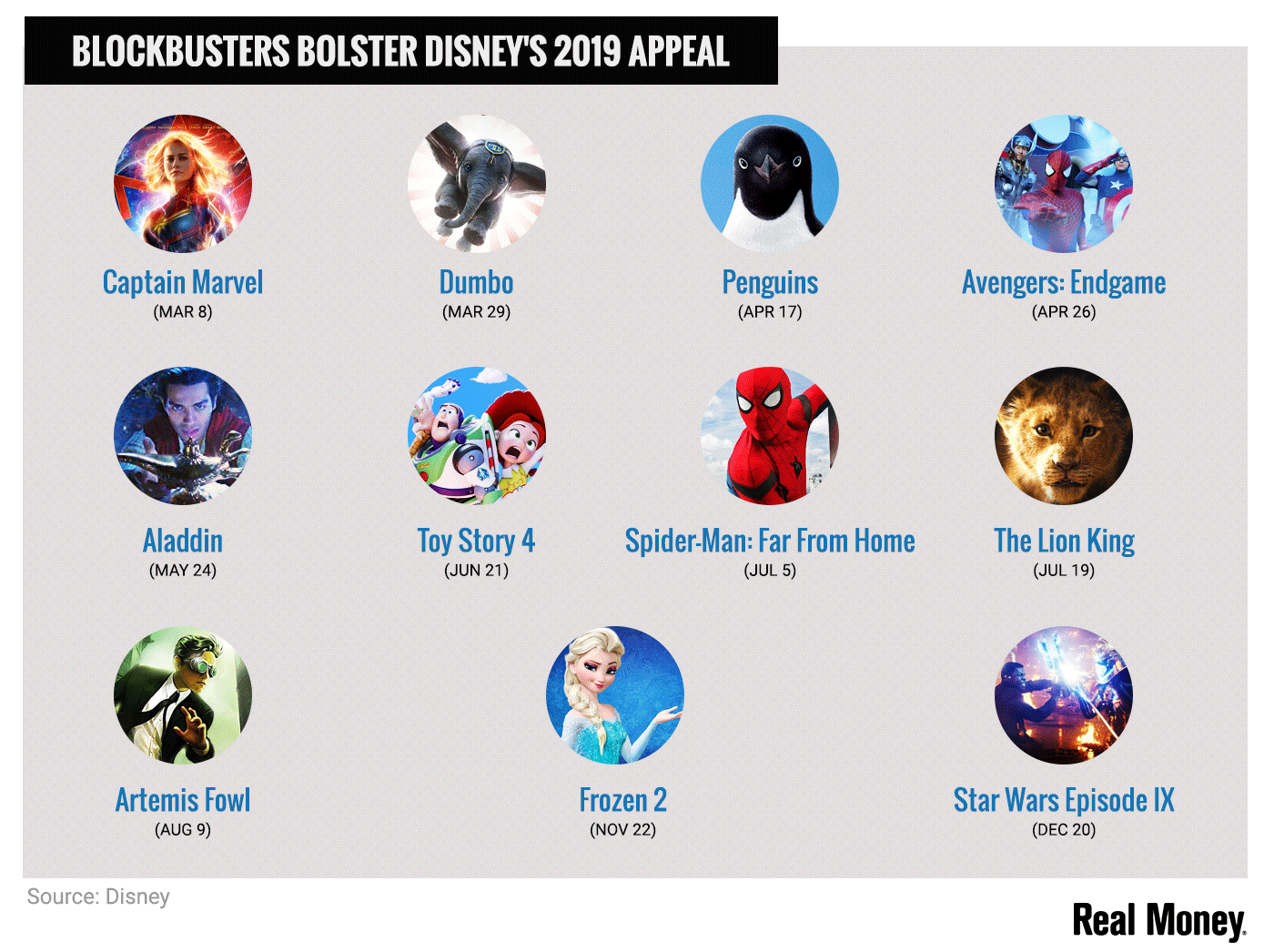 "The outlook for the Studio remains particularly attractive looking ahead, with The Lion King in FQ4 and with Star Wars: The Rise of Skywalker and Frozen 2 in FQ1'20," Quadrani noted. "Merchandising should be strong in FQ3 with Toy Story 4 and Spider-Man: Far From Home (Disney has merchandise rights although the film is a collaboration between Marvel Studios and Sony)."

With a five-year plan in place for numerous Marvel releases to come and the recent announcement of a fuller slate at Comic-Con over the weekend, there is room for optimism about the studio surge's sustainability.

Aside from merchandise and park attractions that can be piggybacked off such success, the real value in driving consumers to the box office is keeping their attention through Disney's new streaming offering.

With some of the most popular releases of all time now under Disney's banner, it would stand to reason that demand for the new Disney+ streaming product will drive significant demand.

With Netflix (NFLX) stagnating in its most recent earnings release due to a lack of blockbuster content, it could also be an opportune time for Disney CEO Bob Iger and Co. to strike, especially as it undercuts Netflix's pricing to get consumers onto the platform. 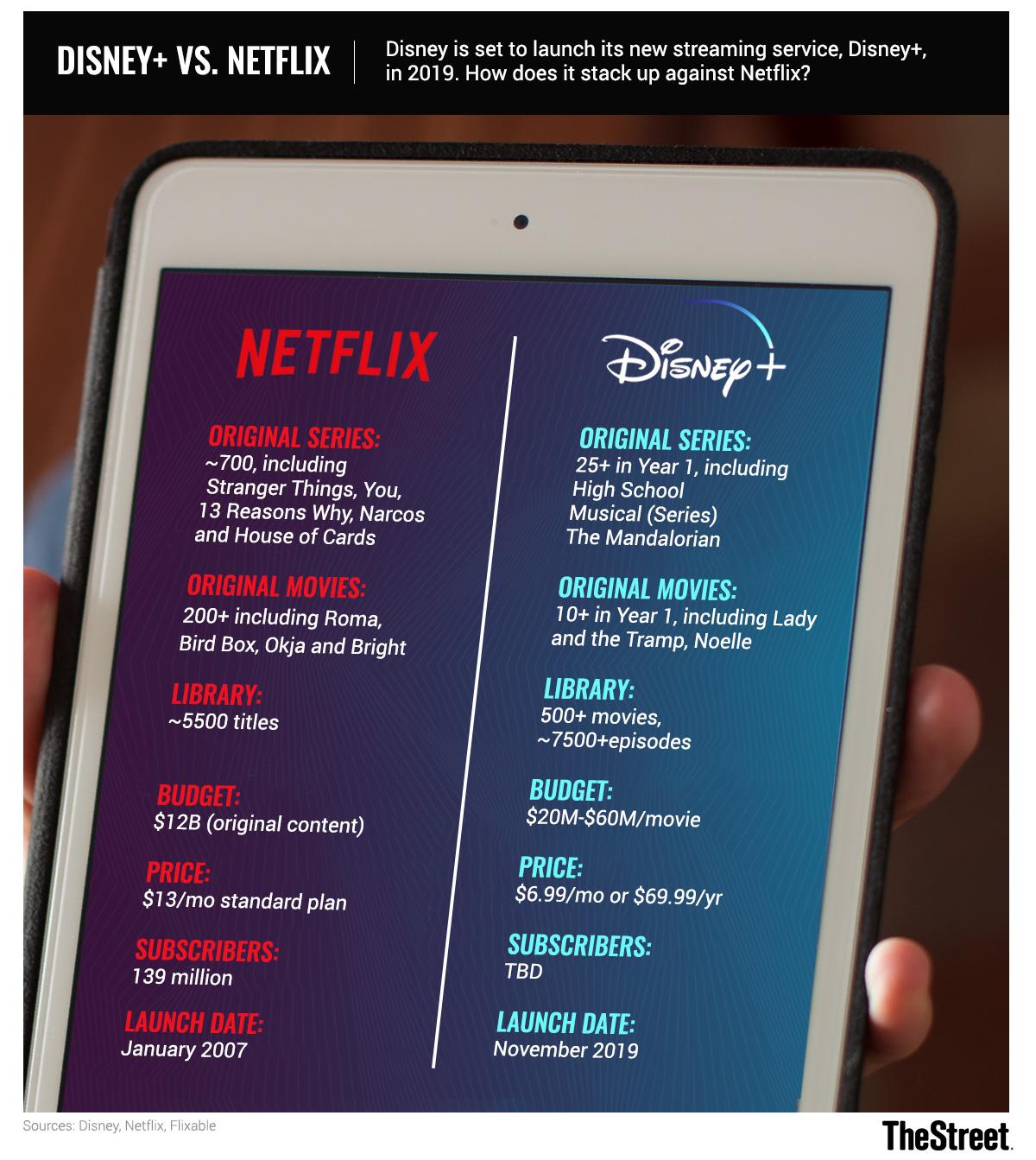 For more on the battle for consumers that Netflix and Disney are headed for and why content is the key factor, click here.

Get an email alert each time I write an article for Real Money. Click the "+Follow" next to my byline to this article.
TAGS: Investing | Stocks | Consumer | Digital Entertainment | Movie Production | Movies | Resorts and Hotels | Television Production/Distribution | Real Money | Analyst Actions | Stock of the Day | Earnings Preview