Walt Disney Co. (DIS) is the Stock of the Day at Real Money this Monday. Analysts are monitoring the box office results of its latest movie release,  "Star Wars: The Rise of Skywalker," which raked in $135 million over the five-day holiday weekend to take its 10-day North American tally to $362 million, according to media reports. The film brought in $94 million at global theaters over the extended weekend to give it a total box office haul of $725 million. Not a bad start, but let's check out the charts and indicators here on Monday morning to see if traders are impressed or disappointed in Disney, which is a holding of Jim Cramer's Action Alerts PLUS charitable trust.

In this daily bar chart of DIS, below, we can see that the price of DIS is up nicely from last year. DIS is trading above the rising 50-day moving average line as well as the rising 200-day moving average line. DIS tested the rising 200-day line several times in October and with hindsight we can see that this was a great buying opportunity. The daily On-Balance-Volume (OBV) line shows a rise from March and that tells us that buyers of DIS have been more aggressive in the past year. The Moving Average Convergence Divergence (MACD) is currently above the zero line but in a take profits sell mode. This signal could be soon reversed to a positive reading again if DIS rallies to a new high.

In this weekly bar chart of DIS, below, we can see we can see a well-developed bottom pattern in 2017 and 2018 before prices began their uptrend. DIS is above the rising 40-week moving average line. The weekly OBV line line has moved higher from April 2018 with a decline in 2019 before the more recent surge to a new high. Overall I would consider the movement of the OBV line to be very bullish. The MACD oscillator on this time frame is in a  bullish configuration.

In this weekly close only Point and Figure chart of DIS, below, a potential upside price target of $191 is projected. 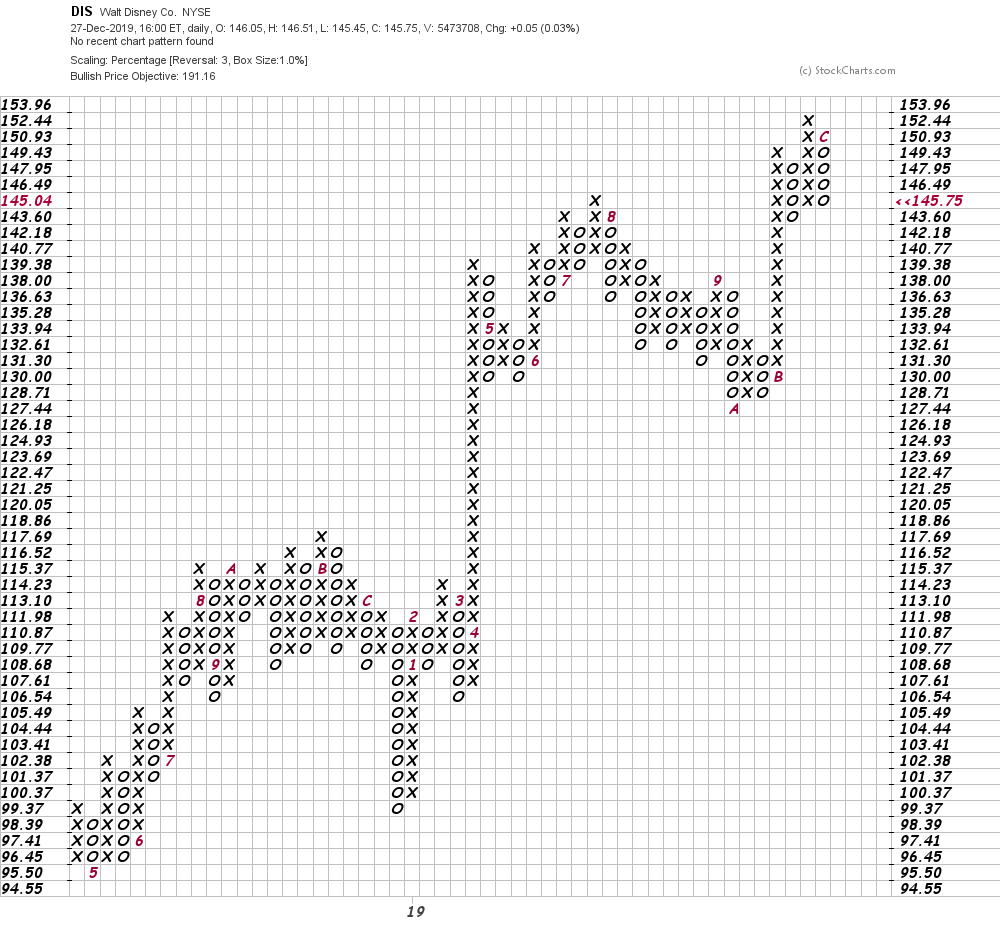 Bottom line strategy: The charts and indicators of DIS present a bullish case. Traders and investors could continue to trade DIS from the long side near $145 and on strength above $150. The $190 area is our price target for the first half of 2020.
Get an email alert each time I write an article for Real Money. Click the "+Follow" next to my byline to this article.
TAGS: Investing | Stocks | Technical Analysis | Consumer | Digital Entertainment | Media | Movie Production | Movies | Resorts and Hotels | Television Production/Distribution | Real Money | Sports | Stock of the Day