Walt Disney Co. (DIS) is set to report its fiscal fourth-quarter earnings after the close Thursday. Numbers do not tell the whole story with Disney as investors over the years have looked ahead to new projects and movies and business deals in this fast-changing industry. Let's see what the charts and technical indicators look like Thursday morning to see if traders are taking a bullish or bearish position ahead of the numbers.

In the daily bar chart of DIS, below, we can see that prices have been creeping higher since early October just above the rising 200-day moving average line. DIS has tested the underside of the declining 50-day line a couple of times and Thursday we could see prices close above that shorter indicator. The trading volume shows a modest increase from the second half of October and that is a positive sign in my book.
The daily On-Balance-Volume (OBV) line has firmed slightly the past five weeks and that signals that buyers are being more aggressive. The Moving Average Convergence Divergence (MACD) oscillator gave a cover shorts buy signal in early October and now this indicator is close to crossing the zero line for an outright go long signal.

In the weekly bar chart of DIS, below, we can see a mostly positive setup with the indicators. Prices are inched higher above the rising 40-week moving average line.
The weekly OBV line turned upward in October and the MACD oscillator is narrowing toward an eventual bullish crossover.

In this Point and Figure chart of DIS, below, we have an interesting setup. The price action so far shows some distribution and thus the software has projected a downside price target. The chart also shows that a trade up at $140.77 will refresh the uptrend and generate a bullish price target. 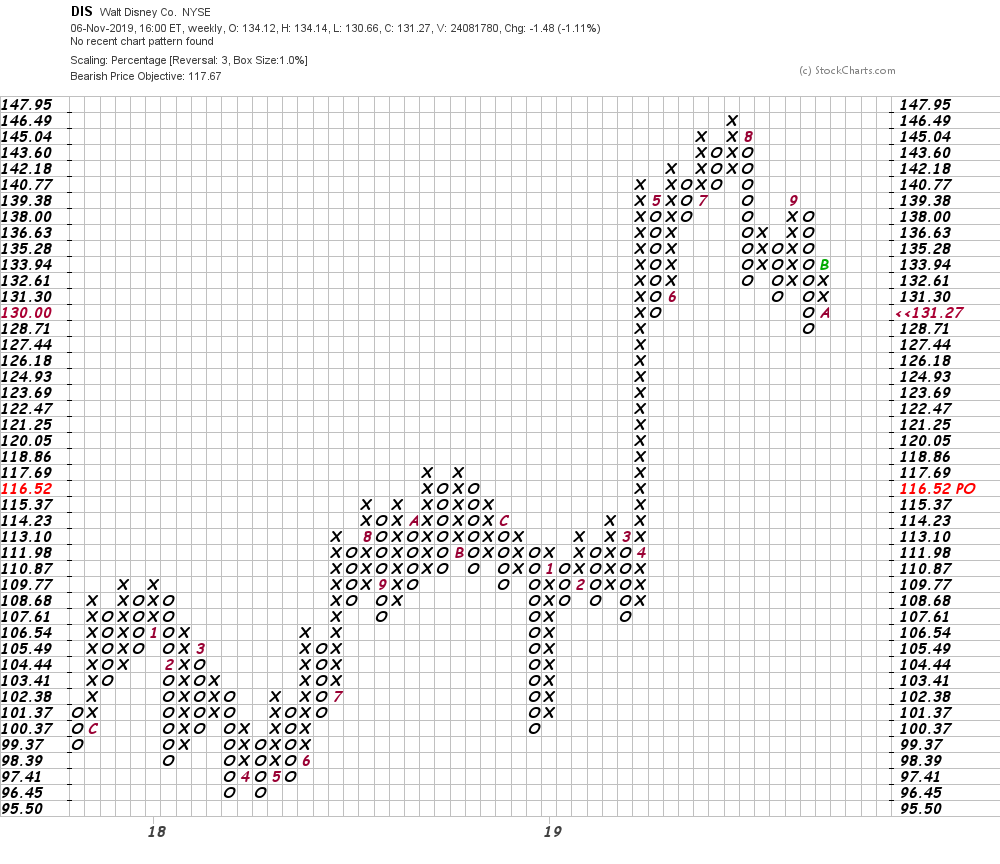 Bottom-line strategy: Nothing is certain when it comes to investing and traders reactions but my sense of the charts and indicators tell me that DIS is more likely to trade higher in the days ahead. Longs should risk a close below $127 now.

Get an email alert each time I write an article for Real Money. Click the "+Follow" next to my byline to this article.
TAGS: Investing | Stocks | Technical Analysis | Digital Entertainment | Food & Drink | Movies | Resorts and Hotels | Earnings Preview